In Gold We Trust: How the 'Entire Western Monetary System is a Fraud' 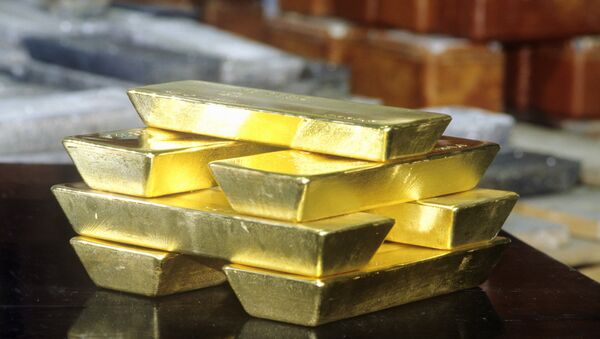 The largest Russian bank, Sberbank, is planning to increase the supply of gold to China up to 10-15 tons in 2018. Keeping in mind that both the Russian ruble and Chinese yuan are covered by gold, this step is a part of the “de-dollarization” of their economies, according to economist Peter Koenig.

The former World Bank staff, current economist and geopolitical analyst Mr. Peter Koenig told Sputnik Radio that this decision by Sberbank is just a continuation of economic and trade agreements between Russia and China.

“Both the ruble and yuan are 100 percent covered by gold, so this is just a part of a larger, fairly advanced scheme of the de-dollarization of their economies,” Koenig said.

He further said, “The entire western monetary system is basically a fraud. It is privately made and privately owned. All international transfers have to transit through Wall Street banks and that is the only reason why the US can actually sanction as they say ‘countries that do not behave according to Washington’s dictate.’”

Moscow to Intensify Work on Cutting Dependence on Dollar as Payment Currency
But according to him this may change rapidly because China and Russia are moving quickly towards complete independence from Western economies.

He further stated that the Shanghai Cooperation Organization and the BRICS countries “truly do not need the West to survive because they make up half of the world’s population.”

The economist added that China and Russia are the world’s largest gold producers and the only problem with gold today is that it is completely beholden to the West’s monetary system.

“For the last five years China, Russia and other members of the Shanghai Cooperation are trading hydrocarbons no longer with US dollars, but in their local currencies or in gold,” Koenig said.

He further spoke about how back in the 70s the US and Saudi Arabia, the head of OPEC, had an agreement that Saudi Arabia would ensure that all Mideast countries would trade their oil in dollars only, and those countries that were against such an unfair rule had to face heavy retribution.

“Those who wanted to depart from this unlawful rule had to pay dearly, such as Saddam Hussein, when he announced that he will trade his oil in euros instead of dollars; we know what happened to him. We also know what happened to Gaddafi who had similar ideas, and Iran also was suddenly faced with accusations of having nuclear weapons,” the economist said.

Saudi Sanctions Against Qatar Aim to Stop Doha 'Pursuing Same Policy as Gaddafi'
He further said that this fraud committed by the US must come to an end and right now China and Russia are offering an alternative.

Earlier, Igor Bulantsev, the head of Sberbank CIB, the bank's investment department, told Sputnik that in July a subsidiary bank in Switzerland started trading in gold on the Shanghai stock market.

“Under the pilot deal, we delivered 200 kilograms [440 pounds] of bars of gold to Chinese financial institutions. This year we are planning to additionally deliver about 3-5 tons of gold to China. Next year we expect an increase in deliveries to China of up to 10-15 tons. Perhaps we will even exceed this figure," Igor Bulantsev said ahead of the third Eastern Economic Forum (EEF) in Vladivostok.

The EEF took place on September 6-7 and was expected to gather over 3,500 participants from more than 50 countries.