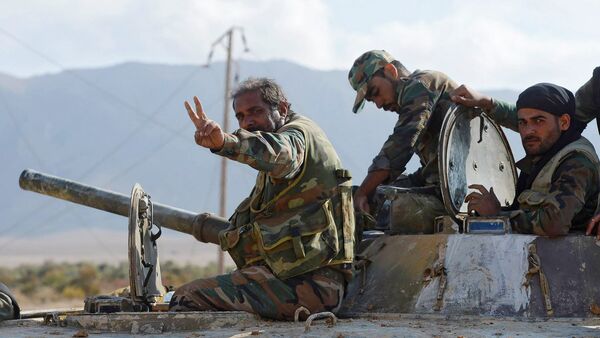 © Photo : Press Service of the President of Syria
/
Go to the mediabank
Subscribe

The lifting of the Deir ez-Zor siege doesn't automatically mean the end of the war against terrorists in Syria, experts told Sputnik, suggesting that having cleared the province of terrorist elements the Syrian Arab Army needs to advance toward the eastern and northern directions.

The breach of the Deir ez-Zor blockade by the Syrian Arab Army (SAA) doesn't mean the end of the war: Damascus should proceed with the offensive against Daesh (ISIS/ISIL) to create preconditions for the continuation of political dialogue, experts told Sputnik.

"Having broken the Deir ez-Zor blockade, [the SAA] will have to attack hotbeds of Daesh in the eastern and northern directions," Konstantin Sivkov, a Russian military analyst and president of the Academy for Geopolitical Problems, told Sputnik.

According to the military analyst, the combat will unfold in small towns and settlements unless the SAA takes part in the liberation of Raqqa: This is possible given the fact that the city has yet to be retaken from terrorists.

Elena Suponina, an expert in Mideast affairs and advisor to the director of the Russian Institute of Strategic Studies (RISS), echoes Sivkov: The battle is far from being over, she says.

Governor Reveals Next Goal of Syrian Army After Deir ez-Zor Siege Lifting
Suponina believes that the SAA needs to step up the offensive since it could help Damascus strengthen its positions in the ongoing political dialogue over the future of the state.

"The breach of the Deir ez-Zor blockade by the Syrian Army and its allies is a turning point in the course of the war in Syria," Suponina told Sputnik. "The Syrian government is making progress retaking more and more territories [from terrorists], while the Daesh terrorist group is losing ground."

She emphasized that the positions of the terrorist organization have been seriously weakened due to the fact that besides territorial losses they have also been deprived of considerable financial resources: the Deir ez-Zor oil fields previously controlled by Daesh provided necessary funding to the jihadists.

Speaking to Sputnik on Tuesday, Muhammed Ibrahim Samra, the governor of Deir ez-Zor, revealed that the SAA was about to start an operation to liberate a military airfield besieged by the Daesh terrorist group in the country's eastern Deir ez-Zor province.

The governor pointed out that the Russian and Syrian Air Forces have destroyed a lot of Daesh strongholds including those in the regions of al-Abgaliya, al-Ayash, Ain abu Juma, al-Tabna, Jibal Tharda and al-Tih.

"In the coming hours, the advancing units of the Syrian Army will meet and start the liberation of a besieged military airfield, as well as the civilian quarters of Harabush, Jafra, Sinauh," Samra said.

Russian Strikes Destroy Daesh Strongholds, Underground Tunnels Near Deir ez-Zor
He explained that the terrorist group had managed to take control over the airfield in September 2016, when the US-led coalition was shelling SAA positions in the region.

Samra added that the US-led coalition's air campaigns have inflicted considerable damage on the region's infrastructure, destroying lots of facilities, including schools, bridges, power stations and other important objects in the province.

What is worse, all these actions played into the hands of the terrorists, the governor emphasized.

"Yesterday, the [US-led] coalition opened fire on civilians. A lot of people died in the regions of al Salihiyah, al Mayadin, al Bukamal," he told Sputnik.

Situation in Syria Favorable for Assad Troops - Putin
On Tuesday, the SAA backed by the Russian Aerospace Forces managed to break the three-year Daesh siege of the city of Deir ez-Zor. In a telephone conversation with Deir ez-Zor defense commanders, Syrian President Bashar Assad congratulated the city's defenders.

Commenting on the successful breach of the blockade the Russian Defense Ministry emphasized the role of the Russian Aerospace Forces in assisting the Syrian Army to break through terrorist defenses and lift Deir ez-Zor's siege.

The ministry added that earlier in the day the Admiral Essen frigate of the Russian Black Sea Fleet launched strikes with sea-based Kalibr cruise missiles on Daesh terrorist group targets near Deir ez-Zor from the Mediterranean.

The Russian Defense Ministry highlighted that Daesh's defeat near Deir ez-Zor will become a strategic loss to the terrorists in Syria.