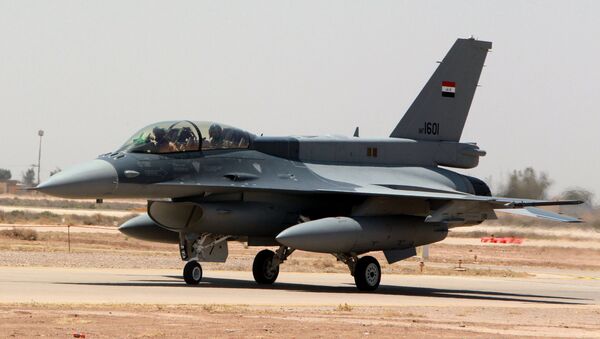 © AFP 2021 / SABAH ARAR
Subscribe
In the wake of revelations of widespread corruption within the civilian logistics and supply networks of the US military around the world, new allegations have pinpointed sex trafficking, smuggling and consistent security violations by a US military contractor at an air base in Iraq.

US supply contractor Sallyport Global, a privately held company, received an almost $5 billion contract with the US State Department in February 2016, to provide security services worldwide for the Pentagon and other branches of the government.

US Energy Dept. at High Risk of Fraud Due to Poor Contractor Oversight

Included in the $5 billion dollar agreement was $700 million to run security and logistics at the Balad Air Base, in central Iraq, where F-16 fighter jets are maintained for the Iraqi Air Force.

Now, amid widespread accusations of an investigatory cover up, lawyers for investigators fired by Sallyport say the company's claims that malfeasance never occured don't add up, according to CBS affiliate WDBJ.

After an initial investigation by Sallyport itself was shut down by the company following the hiring of new management, a second internal investigation also failed to identify any wrongdoing by company employees at the air base.

The Associated Press revealed its allegations of criminal activity and an internal coverup on Wednesday, based on documents and interviews with previous investigators — and many other employees — who had been dismissed by Sallyport in March.

Sallyport's move to fire its own investigators strongly implied the existence of wrongdoing on the part of the company's executive management.

After Sallyport refuted all charges of prostitution at the air base in their second internal investigation, the fired investigators and their attorney, Debra Katz, claimed attempts to speak with key players involved in the earlier case were blocked by the company.

In February 2016, according to the first investigation, at least four Ethiopian prostitutes were sent to the Balad Air Base by Sallyport, after hotel guests using their services off base, including several Sallyport employees, claimed they had been given sexually transmitted diseases.

According to AP, Sallyport denied accusations that company lawyers demanded that two sets of files be kept so as to hide key compliance information from the US government, the source of the company's lucrative multi-billion-dollar contract.

In a statement attempting to justify the two sets of books, Sallyport COO Stuckart said, "The investigators were specifically told to continue keeping a log, available to the US government, of every investigation but not to include any attorney-client privilege information on that log."

But Katz, the attorney for the fired investigators, stated that, "They were explicitly told to keep double books."

"There is no argument of attorney-client privilege that could justify the orders," she added, cited by AP.

No formal investigation into wrongdoing has been instigated by the Pentagon, however allegations against Sallyport continue to grow, according to WDBJ.