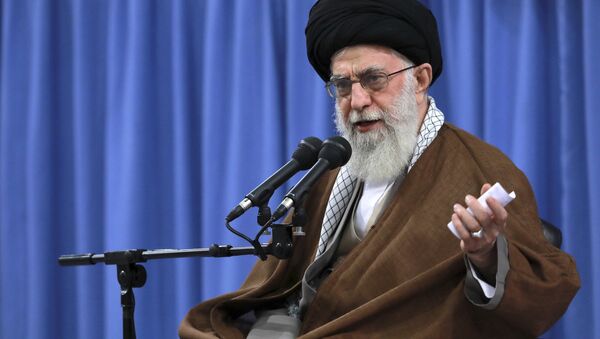 “What Americans did was a strategic mistake, and they are repeating the same mistakes done by their predecessors,” Khamenei said at a meeting with senior Iranian Armed Forces commanders in Tehran, as quoted by the Fars news agency.

He also accused the United States of supporting terrorism in the region.

“Former US officials created ISIL [Daesh] or helped it, and present officials are reinvigorating ISIL and similar groups,” Khamenei said.

On Thursday night, the United States launched 59 Tomahawk cruise missiles at the Syrian military airfield in Ash Sha’irat. US President Donald Trump said that the attack was a response to the alleged chemical weapon use in Syria's Idlib province on Tuesday, which resulted in the death of over 80 people, an incident which Washington blames on the Syrian government.

North Korea Calls Syria Missile Strike by US ‘Unforgivable'
The Syrian foreign minister denied the government’s involvement in the Idlib incident, saying it had never nor would it ever use chemical weapons on either civilians or terrorists operating in the country.

Russian President Vladimir Putin said Thursday that groundless accusations in the chemical weapons incident in Syria's Idlib were unacceptable before the investigation into the matter had been carried out while Foreign Minister Sergei Lavrov on Saturday criticized the US missile attack as a violation of the international law.

The US missile attack claimed the lives of 10 people, an officer of the Syrian Armed Forces told Sputnik. The Russian Defense Ministry said that the attack left two Syrian servicemen missing, four killed, and six suffering severe injuries from the fire. Homs Governor Talal Barazi said Friday that at least two civilians from a nearby village and five Syrian servicemen were killed.