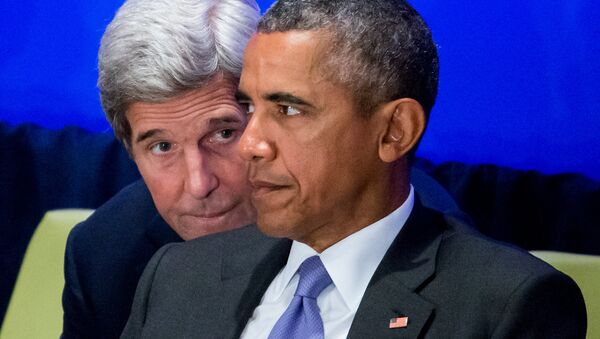 © AP Photo / Andrew Harnik
Subscribe
International
India
Africa
As the nationwide ceasefire brokered by Moscow and Ankara has been generally holding in Syria for ten days now, it is largely considered as the best news from the war-torn country in years, giving every chance for the conflict to be finally resolved.

Russia Announces Further Syria Troops Pullout as New Ceasefire Holds
After Moscow-Ankara-Tehran negotiations on Syria, Russian President Vladimir Putin announced on December 29 that the Syrian government and armed opposition groups had reached an agreement on a nationwide ceasefire in the country and on readiness to start peace talks.

A nationwide ceasefire in Syria was brokered by Russia and Turkey and later approved by the United Nations. The ceasefire deal in Syria has been in effect since December 30. The truce is expected to be followed by peace talks in the Kazakh capital of Astana later this month.

On Saturday, Russian officials within the joint Russian-Turkish ceasefire commission registered 10 violations in Syria over 24 hours. The Russian Defense Ministry said that the overall number of violations is decreasing, which strengthens trust between the parties to the ceasefire pact.

Aleppo's Liberation Made Syrian Ceasefire Possible
Interestingly, this has been the first truce in Syria, in which the guarantors are Russia and Turkey, without the involvement of the United States.

Despite voting in favor of the UN Security Council’s approval of the Russia-backed plan on the Syrian peace settlement, Washington seems to be "sidelined and left out of this [Syrian peace] process," British politician, writer and former MP George Galloway told RT.

"Now the Troika of Iran, Turkey, and Russia working with the [Syrian President Bashar Assad] regime in Damascus is solving this matter for themselves, and that is what is deeply humiliating for the US. If anyone looks more pitiful today than President Obama, it is Secretary [John] Kerry, who has been completely sidelined and left out of this process, because his government only wanted to throw a spoke in the wheel of progress, rather than facilitate progress. So it is no surprise that the parties who really want a settlement have decided to do it without the US on this occasion," Galloway noted.

Moscow at 'Center of Decision Making in Syria While US is Out in the Cold'
The opinion was echoed by Turkish political scientist Emre Ersen, who told Sputnik Radio that "currently we know that the US and UN are largely excluded from the new ceasefire process and I don't think that they are very happy about this. Especially considering that Turkey is a member of NATO."

He also commented on the similar agreement brokered between Russia and the US, which failed in its infancy, and suggested what might hamper the current nationwide ceasefire plan.

"We know that the US has provided military support to some of the groups in Syria but it has actually never wanted to be involved very actively in the Syrian conflict from the very beginning. Which, in time, has seriously weakened its hand at the diplomatic table," he said.

In an interview with Sputnik, the chief adviser to the Turkish president, Ilnur Cevik, said that the Moscow-Ankara deal on the Syrian truce "shows the huge potentials for world peace when Turkish President Recep Tayyip Erdogan and his Russian counterpart Vladimir Putin cooperate so closely."

"Erdogan and Putin are seen as two leaders contributing to Middle East peace. The ceasefire is the work of Mr. Erdogan and Mr. Putin and their growing influence on regional issues," he said, adding that "Of course the fact that Iran is also in the equation will ensure the success of the current peace initiatives in Syria."

The Syrian ambassador to China and former envoy to the US, Dr. Imad Moustapha, told RT that he believes that the nationwide ceasefire "would be a watershed moment in the course of the Syrian crisis."

"This deal is offering humanity…the opportunity to stop the bloodshed. So this is a remarkable achievement. We genuinely hope that it will succeed and allowed to be implemented in as much as realistically possible way," he concluded.