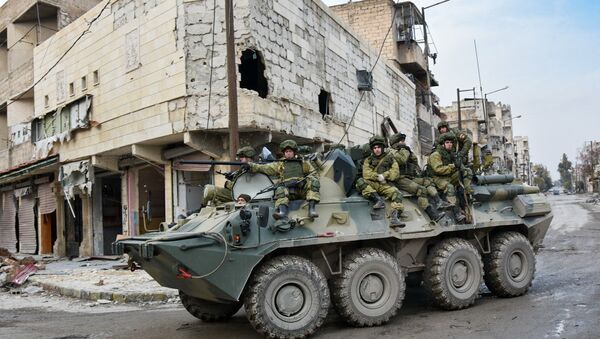 On Friday, Russia began the planned reduction of its military presence in Syria while the recently declared ceasefire is being observed at large. Meanwhile, ahead of the upcoming peace talks in Kazakhstan, more and more media sources are now admitting that it is Moscow, not Washington that is "calling the shots" in the Middle East. And here is why.

Russia's planned reduction of its military presence in Syria has begun with a Northern Fleet carrier group led by the Admiral Kuznetsov heavy carrier, the chief of the Russian Armed Forces General Staff said on Friday.

The decision was made by Supreme Commander-in-Chief of the Russian Armed Forces Vladimir Putin at the recommendation of Defense Minister Sergei Shoigu on December 29, right before the nationwide ceasefire in Syria took effect at midnight local time on December 30. 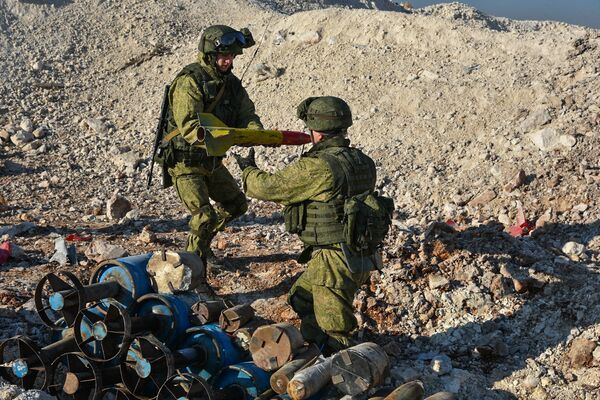 Military engineers of the Russian Army's international counter-mine center continue the demining operation in eastern Aleppo, Syria
© Ministry of defence of the Russian Federation
/
Go to the photo bank

The ceasefire deal was brokered by Moscow, Ankara and Tehran. Egypt, Saudi Arabia, Qatar, Jordan and Iraq, as well as the United Nations are expected to be invited to join peace efforts in the future.

Meanwhile, more and more media sources have started to admit that "it is Moscow and not Washington that is calling the shots in the Middle East."

Among these news outlets is The Guardian, which examined the situation in which, "Moscow is at [the] centre of decision making while [the] US is [left] out in the cold."

"Labelled an international pariah only months ago by Boris Johnson, and warned he would be stuck in a Syrian quagmire by a patronizing Barack Obama, Vladimir Putin ends 2016 if not as the undisputed victor, then at least as the man at the center of decision making," diplomatic editor Patrick Wintour writes in his article for the British national daily.

Russia and Its Armed Forces 'Turned the Tide of Syrian War'
He further explains why the Russian-Turkish peace drive has all the signs of becoming a success even though "experience in Syria shows ceasefires are fragile and do not lead to peace talks, let alone peace deals."

The author joins the choir of those saying that it is Russia who has turned the tide of the Syrian war and the defeat of the rebels in east Aleppo "changed the military balance for good."

US President-Elect Donald Trump, who is expected to be sworn in on January 20, he further reasons, will most likely choose to back Assad, and not the Saudi-supported rebels.

"It leaves the divided rebels forced back on their own resources, and the Gulf states. Saudi Arabia has discovered for itself in Yemen the price of war, and will not intervene militarily in Syria without US involvement," he suggests.

Meanwhile, Russia is "welcoming diplomatic and economic overtures from traditional US allies in the region. Qatar has invested in a $11.5bn deal for a 19.5% stake in Rosneft, Russia’s largest oil producer, even though the company is subject to US and EU sanctions." 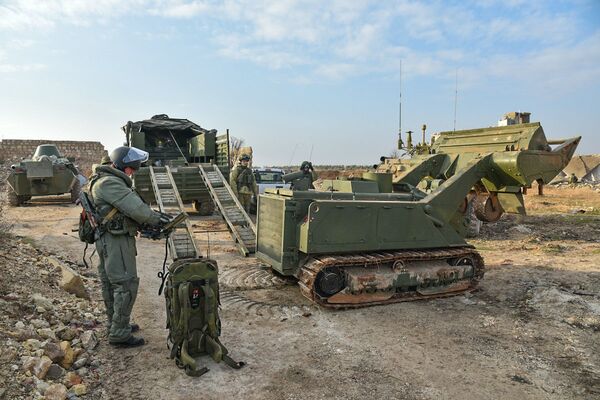 Military engineers of the Russian Army's international counter-mine center continue the demining operation in eastern Aleppo, Syria
© Ministry of defence of the Russian Federation
/
Go to the photo bank

Egypt also "appears to be close to a new beginning with Moscow."

"Finally, Assad’s greatest external opponent, Turkey, has for a mixture of reasons – some noble and some self-interested – decided to make its peace with Putin," he admits.

However the author further elaborates that the upcoming peace talks in Astana won't be a "plain sailing for Russia."

"For a start Turkey still insists Assad will have to stand down as part of the peace process, the issue that led to previous peace talks to founder," he says.

Hence the Russian leader still has to "find a formula that eluded the UN’s Syrian peace envoy, Staffan de Mistura, which allows the talks to start with the issue of Assad’s future in effect parked."

However he suggests that President Putin has already "offered Turkey’s president a bargain."

Syrian Opposition Member to Sputnik: We Don't Want Syria's Breakdown
"In return for allowing the Syrian army to capture Aleppo, Recep Tayyip Erdogan looks to have been given the opportunity in northern Syria to push back against a Syrian Kurdish federation, his key concern, even though the US-backed Syrian Kurds have been at the forefront of the fight against Islamic State in Raqqa."

The Kurds were excluded from the UN Geneva peace process, and Putin’s initial peace talks due to take place in Astana, the capital of Kazakhstan, may also leave the Kurds without a seat at the negotiating table, he further suggests.

"If so, the Kurds, another bloodied US ally, will feel that the professorial Obama proved to be a lot better at lecturing on the state of the world than actually shaping it. And into that vacuum, Putin has successfully rushed," he finally states.

This view was recently echoed by London-based media analyst and researcher, specializing in the Middle East security, Danny Makki, who recently explained to Radio Sputnik why the Syrian ceasefire is likely to become a success.

"You've got to remember that many of the groups and movements who have signed up to this agreement are currently fighting with the Turks around the city of Al-Bab against ISIS (Daesh)," he told Sputnik.

"Turks have essentially put their necks out on the line and attempted to say to the Gulf countries: you've been supporting the opposition for a huge amount of time but because we have a border with Syria, because we have better and closer credibility among the Syrian rebels, we can force them into a ceasefire," he suggested.

Uninvited Saudis, Qatar Behind Syrian Rebel Groups Boycotting Peace Talks
"You can clearly see a fact that Saudi Arabia is not even involved in this peace agreement which would create a problem to most of the jihadist groups being funded by Saudi Arabia," he said.

The expert also noted that the current developments in Syria only prove how significant the Russian presence in the region has been and how significantly it has changed the internal dynamics of the Syrian crisis.

"Who would have thought in 2015 when the government was facing almost breaking point that the Russians would be celebrating at least a moral victory in an international struggle against the US in Aleppo after signing a peace agreement for the rebels with Turkey, one of the main countries and backers of the opposition," he finally stated.