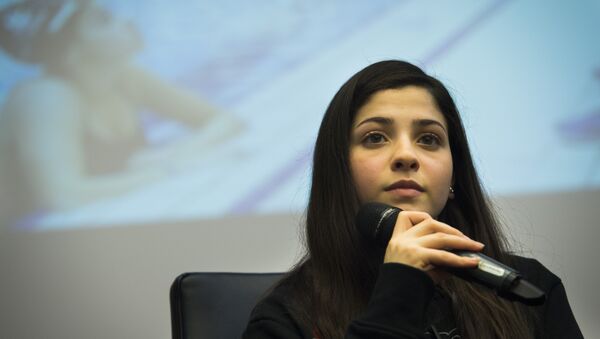 Seventeen-year-old Yusra Mardini swam from Turkey to Greece to save her life after fleeing Syria.

Dress to Impress: Russian Uniform for Summer Olympics Unveiled
She helped push the boat to Greece to save others after the motor failed. Now Yusra is headed to compete in the Olympics.

Recalling her experience of barely surviving, Yusra in her video for UNHCR said that there were 20 people on the boat and after half an hour the motor stopped. She said that she lost except the clothes on her back.

Now the young swimmer is hoping to qualify for the 2016 Olympic Games in Rio and join the Team of Refugee Olympic Athletes (ROA).

17 year old Yusra helped push her boat to Greece to save others after the motor failed. Now she's headed to compete in the Olympics. This is the future of Syria.Video from UNHCR

Posted by The Syria Campaign on Wednesday, March 30, 2016

Yusra said, “I want to represent all the refugees because I want to show everyone that after the pain and after the storm comes calm days. I want everyone not to give up on their dreams I want everyone to do what they feel in their heart even if it’s impossible,” UNHCR reported.

Currently, Yusra is training in Germany to be a Refugee Olympic Athlete. On the official Olympic site Yusra said that developing her talent as a swimmer was challenging in Syria.

“The war was hard; sometimes we couldn’t train because of the war. Or sometimes you had training but there was a bomb in the swimming pool,” she said.

She is hoping to be a part of the ROA team – which will be treated at the Games like all the other teams of the 206 National Olympic Committees (NOCs).

Members of the ROA team must reach particular sporting standards and have their official refugee status verified by the United Nations (UN), but will enjoy the same Olympic experience as the athletes of other NOCs, including their own welcoming ceremony at the Rio 2016 Olympic Village.

Soon after arriving in Germany, Yusra was introduced to Wasserfreunde Spandau 04, a swimming club based near her refugee center, where she’s now aiming for Olympic qualification in a pool that was originally built for the Olympic Games Berlin 1936.

Yusra has a clear ambition for the future: “I think my target is to qualify for the Olympics and to be an inspiration for everyone.”