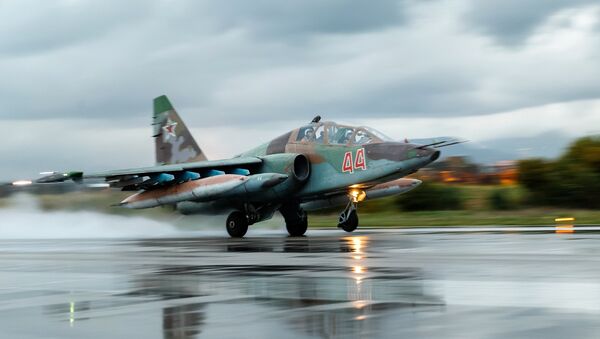 © Russian Defense Ministry
/
Go to the photo bank
Subscribe
On March 14, Russian President Vladimir Putin ordered the Defense Ministry to withdraw the bulk of Russian forces deployed to Syria. According to the president, the Russian military campaign in Syria has achieved its main goals.

5 Months That Changed It All: In Syria, Washington 'Follows Russia's Lead'
The news about the pullout came as a bolt from the blue and made headlines across the globe. However, it was not surprising since Moscow, according to expert, accomplished – fully or partially – its objectives. Putin’s decision came amid a ceasefire with Syrian opposition groups and the resumption of the intra-Syrian talks in Geneva.

The Russian involvement in Syria pursued several goals: supporting for Syrian President Bashar Assad and his government, fighting terrorism, strengthening Russia’s positions in the Middle East, and other political advantages.

President Putin Awards Russian Soldiers for Special Operations in Syria
Russia decided to deploy its tactical force to Syria at the request of President Bashar Assad on September 30, 2015. In October, President Putin underscored that the campaign was aimed at "stabilizing the legitimate Syrian government and creating ground for a political compromise." In November, he noted that the goal of the Russian Aerospace Forces was to clear Syria of terrorists and prevent possible terrorist acts in Russia.

During a meeting on March 14, President Putin confirmed that Russian deployment facilities in Syria – the naval facility in Tartus and the Hmeymim airfield – will continue to operate and will be "secured from ground, the air and the sea."

Furthermore, Russia will fully implement its obligation on arms supplies to Damascus and the re-armament of the Syrian Army. The Russian-backed coordination center for reconciliation will also continue to operate.

Commenting on the Russian withdrawal from Syria, a source close to the Kremlin told RBK that the three main objectives have been accomplished, including starting the Syrian peace process, repelling militants from Damascus, and inflicting heavy losses on Syrian terrorist groups. With these goals achieved, there are hopes for upcoming stabilization in Syria.

According to analyst of the US think tank Stratfor, Russia had several main goals in Syria. The first was support for Bashar Assad and the expansion of Moscow’s interests in Syria. The second was to test and demonstrate the capabilities of Russian weapons in action. The third goal was to fight global terrorism. Finally, Moscow had some global diplomatic goals during the five-month-long campaign, according to Stratfor.

Diplomacy was the top priority, Anatoly Khramchikhin, deputy head of the Institute for Political and Military Analysis, told RBK. According to him, it was a matter of reputation – to have dialogue with the West on equal terms.

"This objective has been completed. We could witness two countries – Russia and the US – involved in dealing with the Syrian crisis," he pointed out.

Damascus Unsurprised by Russia's Syria Pullout - Assad's Aide
Over the five months of the operation, Russia has helped one of its key allies in the Middle East, Bashar Assad, to stay in power, having even strengthened his positions.

By September 2015, the Syrian Army was on the brink of defeat, sources close to the Kremlin commented on the beginning of the Russian operation. According to the sources, by that time terrorists approached Damascus suburbs and Assad’s government could collapse at any moment.

Moreover, a terrorist group could have seized power in Syria. This was the reason why Moscow engaged, the sourced explained.

Many of those involved in the Syrian crisis expected Assad’s government to fall but the Russian campaign destroyed their plans, Nikolai Sukhov, an analyst at the Center for Islamic Studies at the Russian Academy of Sciences, said.

Syria Truce Shows Conflict to Be 'Resolved in Assad's Favor'
With the assistance of the Russian Aerospace Forces, the Syrian Army regained control over a number of strategic towns in Syria. Aleppo, the country’s second-largest city, is now almost surrounded. In autumn 2015, government forces backed by Russian airstrikes managed to cut Aleppo from northern territories. They also took control over the Kweiris airbase which was under the control of militants for over three years.

During the Russian campaign, the Syrian Army also regained control over much of the provinces of Hama and Homs. Latakia was fully liberated. The battle for the ancient city of Palmyra is now underway.

According to Stratfor, the Russian aviation backed by Lebanese Hezbollah and Iran has helped the Syria Army score an advantage over opposition groups all over the country. At the same time, Stratfor warned, the Russian withdrawal may weaken the positions of the Syrian Army.

To sum up, Syria, a country which was on the brink of collapse last summer remains a sovereign state. Currently, even rivals of President Assad have to admit there is no alternative to him in Syria, a fact that Moscow has stressed since the beginning of the Syrian crisis.

During the 167 days of the operation, almost all of Russia’s most advanced jets, strategic bombers, air defense systems, and naval forces were involved. The task force was expanded to 70 aircraft, including the newest Su-35 four-generation jet fighters.

During the Syrian operation, Tu-160 long-range bombers went through their baptism by fire. They conducted several sorties from an airfield in Russia’s Mozdok.

In addition, 4,000 personnel were deployed to Syria. After a Turkish jet shot down a Russian Su-24 bomber Russia deployed to Syria several air defense systems, including the Pantsir-S1, Buk-M2 and the cutting-edge S-400.

The Russian task force in Syria was support by naval forces, including the B-237 Rostov-on-Don submarine and the Varyag missile cruiser. They fired 48 Kalibr cruise missiles at terrorist targets in Syria. This was the first combat usage of the Kalibr missile.

According to Stratfor analyst, Russia showcased the full range of its advanced weapons and demonstrated their capabilities to potential buyers. One of the results is the upcoming $8 billion arms deal with Iran.

According to military analyst Mikhail Khodarenok, during the operation a number of weapons were used for the first time in combat, particularly the Kalibr naval-based missile and the Kh-555 aircraft-based missile. In addition, Russia used KAB-500 guided air bombs.

"The use of weapons of this kind is a pass ticket to the club of privileged powers," the analyst underscored.

Russia Withdraws Airgroup From Syria as Goal to Stop Daesh Reached
Commenting on the results of the operation, Russian Defense Minister Sergei Shoigu said that 209 terrorists’ oil facilities as well as 2,921 oil transportation targets were destroyed.

A total of 2,000 terrorists were killed in the airstrikes.

At the same time, while commenting on their advances in Syria, the Defense Ministry focused on liberated areas. On January 15, during a briefing of the Russian General Staff, Lieutenant General Sergei Rudskoi said that in the first 100 days of the operation 217 populated areas were liberated.

A total of 400 populated areas were liberated by the Syrian Army with the support of the Russian aviation.

During the operation, the West has repeatedly criticized the Russian operation in Syria. For example, Washington has accused Russia of conducting airstrikes against opposition forces.

According to former Syrian Vice President Qadri Jamil, despite the tensions between the West and Moscow, the Russian airstrikes significantly contributed to the beginning of the negotiating process in Syria.

Win-Win: 'Russia is not Losing Anything' by Leaving Syria
"Those looking for a political solution have become stronger while those supporting terrorists have weakened," Jamil said.

Russia and the US agreed on a ceasefire in Syria which came into effect on February 27.

According to US State Secretary John Kerry, Moscow and Washington agreed on a system which would guarantee the fighting against Daesh (also known as ISIL/Islamic State) and the al-Nusra Front.

"The goal to prevent the Syrian state from collapse has been achieved. Terrorists have also been weakened," Jamil underscored.

According to him, initially the Russian aerial campaign in Syria was announced as short-term and the term was kept.

The Russian withdrawal from Syria would stimulate the peaceful process and gives hope that the conflict will be resolved peacefully. When the operation began many in the West predicted a repeat of the Afghan scenario for Russia and accused Moscow of expansionism in the Middle East. The advances of Russian forces in Syria and the withdrawal of forces prove that during the operation Moscow strictly adhered to the assigned tasks and goals.

000000
Popular comments
The exceptional nation and its subservient vassal allies including japan and south Korea must hang their head in shame for their vilification and insults they have heaped upon the Russian president Mr.Putin. I am sure Mr.Putin deserves the highest award on this earth, i.e peoples love and if selected for the noble price , he must reject it indicating that he never aspired such western oriented price.I LOVE Mr.PUTIN.
kasivasantha
17 March 2016, 17:52 GMT
000000
I hope that Putin will not lower himself by accepting the Nobel peace medal. That would put him on the same level as Odumbo. The Nobel commity should demand from Odumbo to return the peace medal since he obviously has proven that he is not worthy off it.