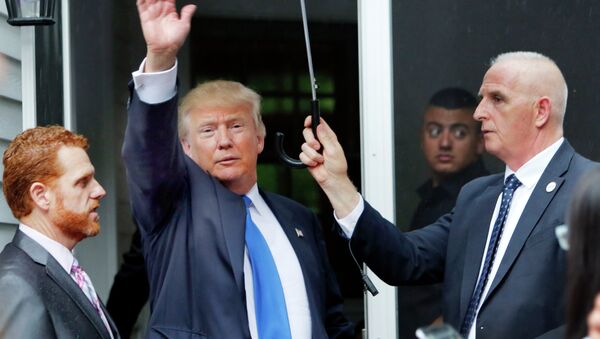 Trump made headlines during his presidential candidacy announcement. Not because of any brilliant oratory or applause-worthy policy goals, but because of inflammatory remarks made about Mexican immigrants. Namely: “most” of them are drug dealers and rapists.

For better or worse, Trump has stood by his comments, even as Univision, NBC Universal, Macy’s, and other major corporations sever ties. During a Fox News interview on Saturday, the mogul admitted that his comments had hurt his business.

"This isn’t good for my brand; I think it’s bad for my brand," Trump said. "Maybe I’m leading in polls, but this is certainly not good. I lose customers; I lose people."

Still, that realization didn’t stop him from stuffing his foot back in his mouth on the very same day.

As Trump has gained a somewhat unexplainable rise in opinion polls, his one contender for the top spot remains the Republican frontrunner, Jeb Bush. Which could help explain why the Donald used his Twitter account to attack his rival for marrying a Mexican immigrant.

Bush’s wife, Columba, became a naturalized citizen in 1979 after immigrating from Guanajuto, Mexico.

The two presidential hopefuls have been exchanging words ever since Trump first made his controversial remarks.

"Trump is wrong on this," Bush said over the weekend, according to CNN. "He’s doing this. He’s not a stupid guy. Don’t think he thinks every Mexican crossing the border is a rapist. He’s doing this to inflame and incite and to draw attention, which seems to be his organizing principle of his campaign."

Never one to let others put words in his mouth, Trump shot back, assuring the public that he meant every problematic remark.

"Today, Jeb Bush once again proves that he is out of touch with the American people," he said in a statement.

"…He doesn’t understand anything about the border or border security. In fact, Jeb believes illegal immigrants who break our laws when they cross our border come 'out of love.'"

To solidify his point, evidently, Trump published the tactless tweet.

Still, though the Donald thinks he would be "the greatest jobs president that God has ever created," even the divinely chosen can make mistakes. Perhaps realizing he had taken the feud a little too far, Trump removed the tweet after 24 hours.

Bush may be unbeatable in national polls. But according to an impromptu Internet survey, the billionaire may want to focus his attacks on a new up-and-comer: Avocados. Of course, the powerful guacamole lobby may be Trump’s last remaining ally.

And to be fair, avocados just saw a huge bump in numbers after an infamous New York Times article suggested guacamole could be made with green peas.

That idea incited more public outrage than one man’s xenophobic comments ever could.