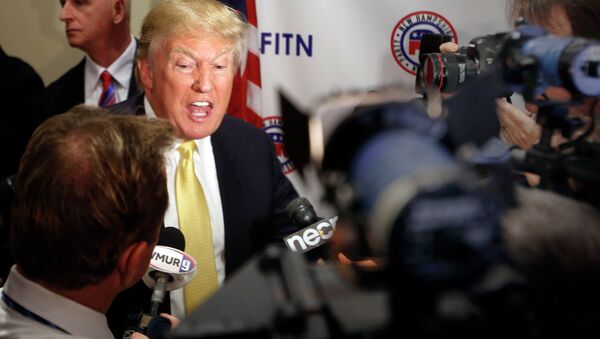 © AP Photo / Jim Cole
Subscribe
International
India
Africa
A bad couple of weeks for The Donald get worse. Retail giant Macy’s is now refusing to sell any Trump-brand merchandise after his controversial comments about immigrants. But at least the candidate’s new fan base can offer support. The only problem: they’re white supremacists.

"[Mexico is] sending people that have lots of problems, and they are bringing those problems to us,” Donald Trump said when announcing his candidacy for president last month. "They are bringing drugs, and bringing crime, and they’re rapists."

Naturally, those comments resulted in a public outcry. Not a great start to a presidential run. Univision, the US-based Spanish-language network, promptly cut ties with Trump. NBC followed, and on Wednesday, Macy’s department store company announced that it plans to pull all Trump-related products from its shelves.

"We are disappointed and distressed by recent remarks about immigrants from Mexico," reads a statement from the retail giant. "…In light of statements made by Donald Trump, which are inconsistent with Macy’s values, we have decided to discontinue our business relationship with Mr. Trump and will phase-out the Trump menswear collection, which has been sold at Macy’s since 2004."

In typical grandiose form, Trump shot back with a fairly unconvincing argument.

“Clearly, NBC and Macy’s support illegal immigration, which is totally detrimental to the fabric of our once-great country,” he said in a statement.

The derogatory comments have clearly done damage, but there’s one demographic that’s totally on Trump’s side.

"I do not believe he would solve all or even most of the problems we are facing, but he is absolutely the only candidate who is even talking about anything at all that matters," wrote Andrew Anglin for the website The Daily Stormer.

This is the same site that recently ran a story entitled "White Fortresses #1: Our People Make the World Go Round, Not Money," and has also published a 5-part special called "Positive Christianity in the Third Reich."

It’s a pretty racist bunch, just to be clear, and it loves Trump precisely because of his immigration comments.

"His announcement contained many important statements, but the most important were about Mexicans," Anglin wrote.

Trump has also gained the support of Kyle Rogers. Rogers tweeted his support on June 16, but deleted his entire account the following day, fearing backlash from the fact that he’s a member of Council of Conservative Citizens. That group was credited for radicalizing Dylann Roof, the terrorist who killed nine in a historic black church in Charleston, South Carolina last month.

White History Month, another supremacist nationalist group, has also begun posting links to news articles about Trump, celebrating him for “refusing to back down.” White History Month also frequently posts about the activity of the Ku Klux Klan.

Trump’s comments may have resulted in major businesses giving him the cold shoulder. But with friends like these…