Deadly Accuracy: Only 1 in 8 Americans Killed by Drones Was Targeted 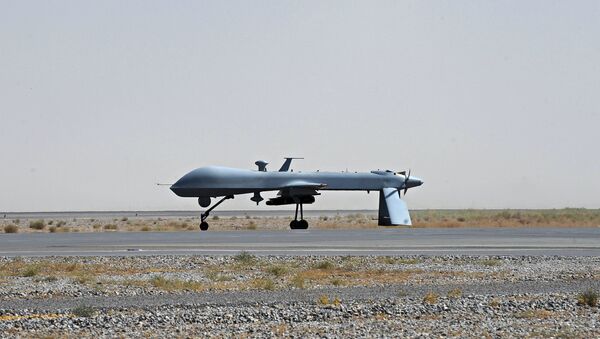 Of the eight Americans killed in United States drone strikes ordered under President Barack Obama’s administration, only one, an al-Qaeda cleric, was identified and deliberately targeted.

The White House announced on Thursday that three Americans, one of whom was a hostage held by al- Qaeda, had been killed this year in drone strikes near the border of Afghanistan and Pakistan.

Family of Killed US Hostage: Govt Help Was ‘Inconsistent and Disappointing’

One of those Americans, Dr. Warren Weinstein, was accidentally killed in a January operation against an al-Qaeda compound where Weinstein was being held hostage.

Weinstein had been in Pakistan on a four-year aid project funded by the US government. Two days before he was due to return to the United States, he was captured in his home by al-Qaeda operatives, the National Journal reported.

The White House said it "had no reason to believe" Weinstein or fellow hostage Giovanni Lo Porto, an Italian national, were present at the targeted al-Qaeda compound.

According to Rachel Stohl of the Stimson Center, a Washington research institute, that statement reflects the true culprit behind the inefficiency of Obama’s drone program: faulty intelligence.

“These are precise weapons. The failure is in the intelligence about who it is that we are killing,” Stohl said in an interview with the New York Times.

The White House also said Thursday that Ahmed Farouq, an American and an al-Qaeda leader, was killed in the same operation that killed Weinstein. Adam Gadahn, another American member of al-Qaeda, was also killed in January, but most likely in a separate operation.

Neither of those members, however, were "specifically targeted," and intelligence personnel did not know they were present at the sites of the strikes, officials said.

Al-Qaeda cleric Anwar al-Awlaki is the sole American killed intentionally in a drone strike. He joined the terrorist group in Yemen and was killed in 2011 after being identified and deliberately targeted.

Killed but not targeted in that same attack was American Samir Khan, an al-Qaeda propagandist from North Carolina. Two weeks later, another strike unintentionally killed Awlaki’s 16-year-old son and his 17-year-old cousin.

Military and intelligence officials said they did not know that the teenagers were present when they took a shot at an al-Qaeda operative who, it turned out, was not there, the Times reported.

All of the deaths of American al-Qaeda fighters have been publicly acknowledged by the Obama administration – a policy that dates back to 2002, when the first CIA drone strike killed an American in Yemen.

Micah Zenko, a scholar at the Council on Foreign Relations and lead author of a 2013 study of drones, does not expect this most recent accidental killing of an American to bring more scrutiny to Obama’s drone program.

Polls have shown that about two-thirds of Americans approve of drone strikes, while the deadly technology has received bipartisan support in Congress.

“I predict that even this episode will have no effect,” Zenko told the Times.