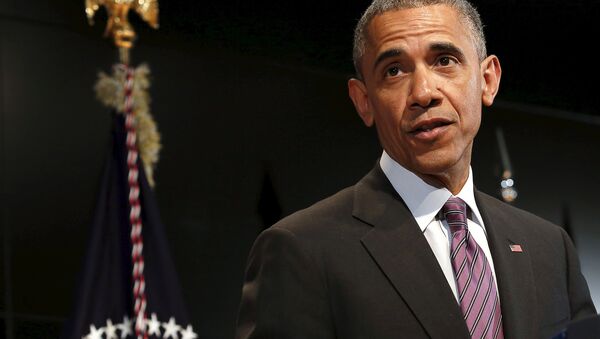 Law Professor Stephen Vladeck told Sputnik that Barack Obama is losing trust and credibility after he failed to disclose information about the extent of US drone strikes.

WASHINGTON (Sputnik), Leandra Bernstein — US President Barack Obama is losing credibility for failing to disclose information about the extent of US lethal drone strikes, experts told Sputnik on Friday.

“Every time we learn about one of these episodes [lethal drone strikes], it becomes that much harder to believe promises this administration has made.”

On Thursday, President Obama acknowledged that the United States had accidentally killed one American and one Italian hostage when it conducted a drone strike against an al-Qaeda compound in January 2015 in the border area between Afghanistan and Pakistan.

US Admits Drone Strike Killed American and Italian Hostages
Vladeck noted that US government officials had characterized the January 2015 incident as a “signature strike,” where the identities of individuals within a targeted area are not specifically known.

President Obama stated in a 2013 speech that the United States would no longer conduct signature strikes after 2014.

Rachel Stohl, Senior Associate at the US think tank The Stimson Center, told Sputnik there is a need “for the American public, American policymakers to hold the Obama administration to account” regarding the lack of information about lethal drone strikes.

The lack of transparency on the lethal done program means the public, and even members of the US government, is “unable to draw conclusion about the program writ large,” Stohl said. “We’re unable to develop some aggregate views.”

The secrecy of the US lethal drone program is a concern, both experts noted.

Obama Should Hand Back Peace Prize as Civilians Killed by US Drones
Asked how many drone strikes the US has carried out, Vladeck responded that “the lack of transparency means we can’t answer that question.” He noted, “It is certainly more widespread than the government would want us to believe.”

Stohl, who directed an independent review of the US drone program in 2014, argued that it is “consistent with American values and principles” for the Obama administration to be held publically accountable for its clandestine drone program.

The Obama administration formally acknowledged the existence of the clandestine drone program in an April 2012 speech by CIA Director John Brennan.

Since, Obama has stated that his administration would “facilitate transparency” on some elements of the program.

On Thursday, Obama held a press conference to acknowledge and apologize for the unintentional US drone strike killing of the two hostages held by al-Qaeda in January 2015.

The White House also acknowledged additional drone strikes that killed of two other US citizens alleged to be al-Qaeda operatives.