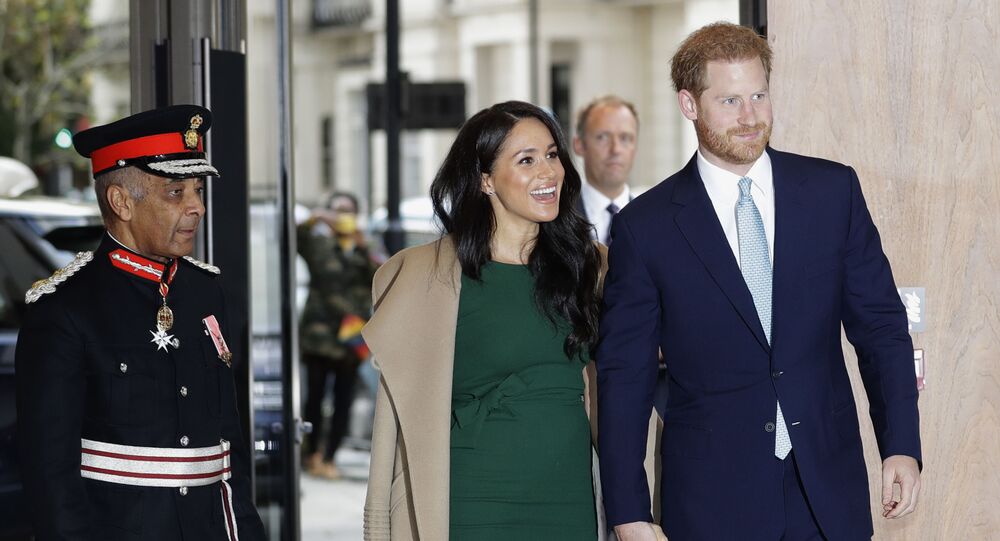 Queen Doesn't Have 'Advance Copy' of the Oprah Interview, as Meghan Says She is 'Able to Speak' Now

Just a day remains before a highly-anticipated interview between the Duke and Duchess of Sussex and American talk show star Oprah Winfrey will be broadcast on CBS. Britain’s ITV has also bought the £1 million rights to release the already-scandalous programme to the British public.

The Queen does not have “an advance copy” of the Sussexes’ interview with Oprah and Buckingham Palace will have to watch the show “at the same time” as the rest of the world, royal aides told the Mirror.

The circulating excerpts for the pre-recorded programme have already demonstrated to the palace that Prince Harry’s wife is not going to be too nostalgic about her time at the royal household.

In one excerpt aired this week, she was heard accusing the Royal Family of “perpetuating falsehoods” about her and the duke.

In the new one, released Friday, the Duchess of Sussex hailed the fact that she is finally “able to speak” for herself and make her own choices in agreeing to an interview with Oprah – she said this was not the case three years ago. During the interview, Oprah recalled that she had tried to secure Meghan for her programme back in February or March 2018 but the duchess had to turn her “down nicely”, adding that there “will be another time” when the two can talk.

Meghan now reveals that she “wasn’t even allowed to have that conversation” with the TV host personally at that time – the Palace communications team was eavesdropping on her call.

Oprah asks: so why is this the right time to speak?

“Well, so many things that we’re on the other side of a lot of... a lot of life experience that has happened,” Markle replies to her in a newly-released excerpt for the 7 March interview.

“And also that we have the ability to make our own choices in a way that I couldn’t have said ‘yes’ to you then. That wasn’t my choice to make.”

WATCH: Here is the latest clip in full from Meghan’s chat with @Oprah just aired on @CBSThisMorning in which she talks about the liberation she feels now that she has quit the Royal Family 👇 pic.twitter.com/bR9GO3KWpq

Life at Buckingham Palace was perhaps too constraining for the American ex-actress, Markle hints.

“So, as an adult who lived a really independent life to then go into this construct that is... different than I think what people imagine it to be, it’s really ­liberating to be able to have the right and the ­privilege in some ways to be able to say ‘yes’.”

To Postpone or Not to Postpone?

Buckingham Palace has not publicly commented on the upcoming interview as the royals have apparently agreed to “reserve judgement” about the talk before the whole show airs on CBS and then on Britain’s ITV the next day at 9 pm, after the channel had bought the rights to the broadcast from American channel.

In the interview with the queen of chat, the two are expected to give lengthy details about their decision to step down from their senior royal positions and outline plans for their future as they are expecting a new child soon to join their family of three.

But many have called on the Sussexes to postpone the release of the programme while Harry’s grandfather Prince Philip still remains in hospital after undergoing a “successful” heart procedure, entering his third weekend away from the Queen.

The Sussexes have apparently signalled to their American friends that it was not up to them but rather to the channel, but one US insider claims that Meghan Markle simply was not interested to postponing the programme despite the calls:

“She said she wouldn’t because it has absolutely nothing to do with Philip and that this is just an excuse by the Palace to keep her muzzled,” the anonymous source claimed.

Another ongoing scandal which came to light after the interview had already been announced is a flurry of “bullying” allegations Meghan Markle is facing from former Kensington Palace staffers that surfaced in a recent report in The Times. Buckingham Palace vowed to investigate the claims but the spokesperson for the Sussexes has dubbed them another “smear campaign”. The press sec said that the allegations have “saddened” the duchess.