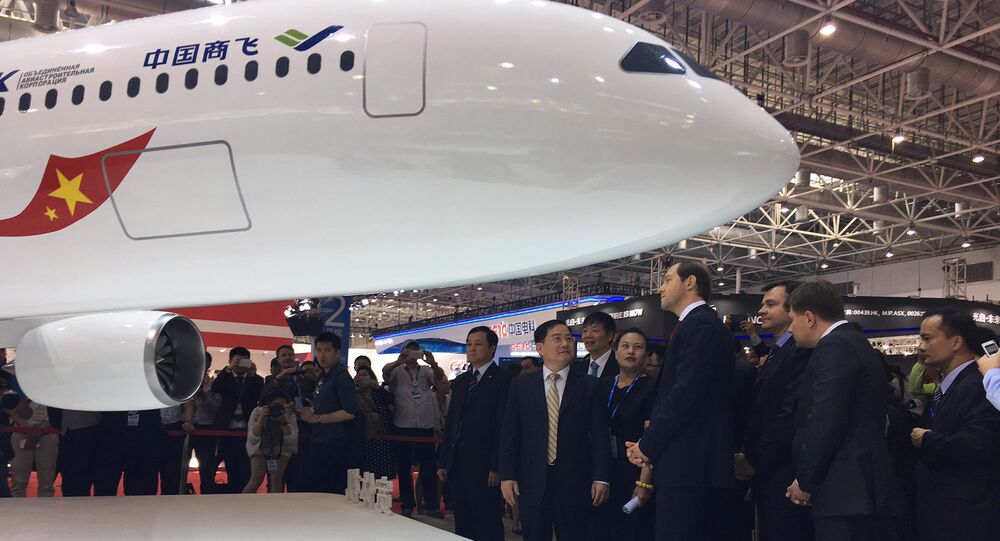 The list could see trade tensions between Washington and Beijing skyrocket and damage US firms selling civil aviation components to the mainland, according to media reports.

The Trump administration will soon hit 89 Chinese aerospace and other firms with measures for alleged ties to the Chinese military, restricting them from access to US technologies, Reuters reported on Monday, citing a draft copy of the list.

Firms such as Commercial Aircraft Corp of China Ltd (COMAC), Aviation Industry Corporation of China (AVIC) and 10 entities with links to the firms were added to the list identifying Chinese and Russian companies as "military end users".

© AP Photo / J. Scott Applewhite
FAA Lifts Ban On Boeing 737 MAX After Aircraft's 20-Month-Long Recertification Battle, House Reforms
A further 28 Russian entities, including aviation firm and MC-21 aircraft designer Irkut, have been targeted, and relevant entities must apply for licences to buy and sell with US firms, but are expected to be denied access, Reuters stated.

The list of entities barred from US investments included armed service and national police, and was expanded in April to supporters and contributors to maintenance and production of military items.

Restricted items include computer software, scientific devices and aircraft parts, among many others, the report read.

According to former Commerce Department staff, Kevin Wolf, the list may be modified before being cleared by the Federal Register by roughly mid-December, when the Electoral College votes for a new president, Reuters said.

But "merely creating a list and populating it is a provocative act" that could spark retaliation from Beijing, an unnamed former US official said as quoted by Reuters.

© REUTERS / Alexander Drago
Pentagon is BAE: Defence Firm CEOs Send Letters to US Gov't for Up to $15bn COVID-19 Lifeline
Both General Electric and Honeywell International supply COMAC have launched joint ventures with AVIC. A statement from a GE spokesperson in the report added the firm had sought licences for all listed entities and would comply with the law.

The listing may also open European competitors exempted from the restrictions to US markets, according to an industry source cited by the report.

A list also would provide European competitors with an opening to promote their manufacturers, by pointing out they do not have to clear such hurdles, even if the U.S. grants the licenses, the industry source said.

But the decision comes as Boeing seeks approval from Beijing to allow the 737 MAX to return to the skies after the Federal Aviation Administration cleared the aircraft last Wednesday. The EU Aviation Safety Agency (EASA) also allowed the troubled plane to return to flight in mid-October after regulators declared necessary changes had been made.

China was the first country to ground the aircraft in March last year after two deadly plane crashes, killing 346 people.

Execs from eight US defence firms, including Boeing's defence wing, Raytheon and Lockheed Martin, lobbied Washington in July for a $15bn lifeline amid plummeting revenues amid the ongoing COVID-19 pandemic and 737 MAX crises.