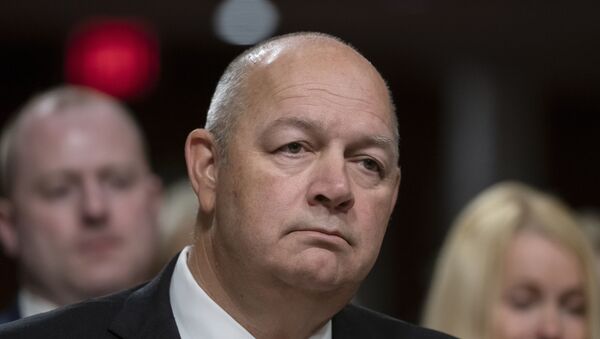 Demond Cureton
All materialsWrite to the author
According to an official FAA statement, the head of organisation passed an order following a 20-month-long safety review process where the body worked with foreign regulators "on every aspect of the return to service", media reported this week.

The United States Federal Aviation Administration (FAA) will lift a ban on the Boeing 737 MAX, it announced on Wednesday.

"Additionally, Administrator Dickson personally took the recommended pilot training and piloted the Boeing 737 MAX, so he could experience the handling of the aircraft firsthand," the statement read.

But despite the measures, the plane is not "immediately" allowed to return to flight as the FAA must approve pilot training programme revisions for all US carriers operating the aircraft, the statement added.

Further airworthiness certificates and maintenance checks, among others, must be secured before approving the aircraft to fly again, the FAA warned.

"Following the return to service, the FAA will continue to work closely with our foreign civil aviation partners to evaluate any potential additional enhancements for the aircraft. The agency also will conduct the same rigorous, continued operational safety oversight of the MAX that we provide for the entire U.S. commercial fleet," the statement concluded.

The news comes after the EU Aviation Safety Agency (EASA) allowed the 737 MAX to return to flight after stating Boeing had made the necessary changes to software problems and shown a "high enough" degree of safety.

Shares for the embattled aerospace firm skyrocketed more than 5.6 percent after the news was announced at the time.

US lawmakers also approved a bill requiring an expert panel to determine safety culture at the Chicago-based planemaker in a bid to build safety management systems and assessments for major changes in aircraft designs, Reuters reported.

The troubled aircraft was grounded globally after two fatal crashes in Indonesia and Ethiopia, killing 346 victims. The plane's Manoeuvring Characteristics Augmentation System (MCAS) has been suspected of causing the crashes.