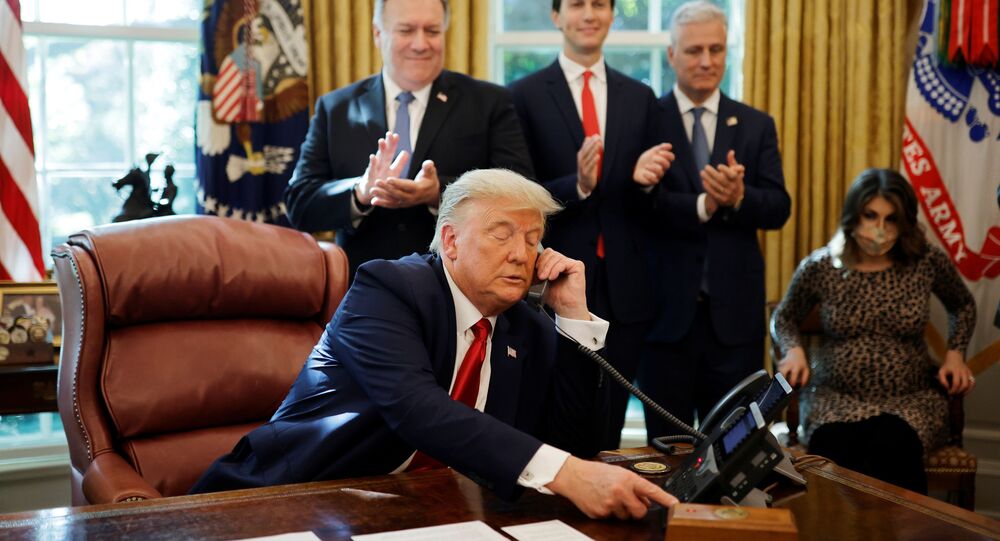 Sudan has become the third Arab country to agree to normalise relations with Israel in the run-up to the US vote.

Israel and Sudan agreed Friday to normalise relations in a deal brokered with the help of the United States, making Sudan the third Arab country to end hostilities with the Jewish state in the past two months.

As part of the agreement, Trump moved to take Sudan off a US government list of countries promoting terrorism. As per a high-profile US official, Trump signed a document on Air Force One on Thursday night to notify Congress about his intention.

"The leaders agreed to the normalisation of relations between Sudan and Israel and to end the state of belligerence between their nations", according to a joint statement issued by the three countries.

According to the joint statement, the leaders agreed to kick-start economic and trade relations, with an initial focus put on agricultural cooperation.

Delegations from each country are set to meet in the coming weeks to negotiate the specifics of the agreements in spheres such as agriculture technology, aviation, migration issues, and other areas, the statement said.

The statement asserts that Sudan's transitional government has "demonstrated its courage and commitment to combating terrorism, building its democratic institutions, and improving its relations with its neighbours".

Sudan is the third Arab country to have taken steps toward normalising relations with Israel, following similar US-brokered moves in recent weeks by the United Arab Emirates and Bahrain. Earlier, two other countries set aside hostilities with the Jewish state - Egypt and Jordan.

Donald Trump has expressed certainty that Iran will also join a "deal like this", adding that he is willing to help the Islamic Republic to do so. POTUS went on to underscore that at least five more countries will join in a peace deal with Israel, with Saudi Arabia sure to "be in the mix soon".

Israeli PM Benjamin Netanyahu for his part lauded the move, saying his country is "rapidly expanding the circle of peace." Speaking about Iran, he said he is in no way opposed to "any deal with Iran", but he is "to the last deal."

Palestinians: Sudan Normalising Ties With Israel is 'New Stab in the Back'

The Palestinian Authority has promptly weighed in on the White House's statement, saying that the development is nothing but a "new stab in the back for them".

“Sudan’s joining others who normalised ties with the state of the Israeli occupation represents a new stab in the back of the Palestinian people and a betrayal of the just Palestinian cause,” said Wasel Abu Youssef, a member of the Palestine Liberation Organisation.