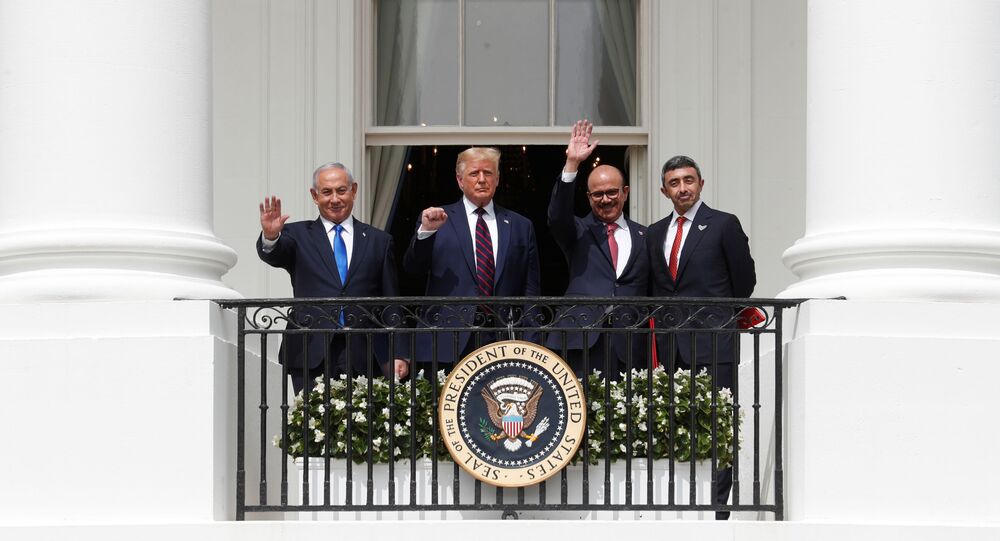 Over the past few weeks, Washington has managed to mediate two peace agreements normalising relations between Israel and two Gulf countries, the UAE and Bahrain. In exchange for establishing diplomatic ties, Tel Aviv has vowed to suspend its efforts to extend sovereignty over parts of the West Bank.

Bahrain, Israel, the UAE, and the US have signed the Abraham Peace Accords at the White House, marking a historic shift in the Middle East as the first two Persian Gulf countries to establish official diplomatic ties with Tel Aviv after decades of hostility, non-recognition, and reported behind-the-scenes relations.

The ceremony was attended by US President Donald Trump, Israeli Prime Minister Benjamin Netanyahu, and the foreign ministers of the UAE and Bahrain - Abdullah bin Zayed Al Nahyan and Khalid bin Ahmed Al Khalifa, respectively. The UAE's representative thanked Netanyahu for agreeing to the terms of the peace accord and expressed confidence that the historic deal will improve life in the region.

"Your Excellency, Prime Minister Benjamin Netanyahu, Prime Minister of the State of Israel, thank you for choosing peace and for halting the annexation of Palestinian territories, a decision that reinforces our shared will to achieve a better future for generations to come", Abdullah bin Zayed said.

Under the accord, reached between Israel and the UAE with the mediation of the US on 13 August, the two countries will establish official diplomatic ties and start working together in a number of spheres, ranging from economy and tourism to security and military cooperation. In return, Tel Aviv has promised to put on hold its plans for extending sovereignty over parts of the West Bank marked in Trump's "deal of the century", although stopped short of abandoning them for good.

The agreement marks a major change in the relations of the two countries, with the UAE having called Israel an "enemy" in 1971, but their ties reportedly evolved over the past decade into unofficial cooperation in certain areas.

The agreements between Israel, the UAE, and Bahrain, which have become the first Gulf states to normalise ties with Tel Aviv, were condemned by Turkey, Iran and the Palestinian Authority as undermining the efforts to find a two-state solution to the Israeli-Palestinian conflict. The president of the PA, Mahmoud Abbas, called on Arab states to follow the provisions of the Arab Peace Initiative that was established in 2002, which suggests that these countries can only begin to establish diplomatic ties with Israel after the Palestinian issue is resolved. Abbas further commented on the signing of the Abraham Accords by stating that "no peace" is possible as long as the Israeli "occupation" of Palestinian lands continues.

© REUTERS / Amir Cohen
'We Stay Home, You Do Too!': Protesters Tried to Block Netanyahu's Departure for Signing Peace Deals With Bahrain, UAE

However, both the UAE and Bahrain said they have not stopped supporting the Palestinian cause, with Abu Dhabi explaining that the peace accord, which halted Israeli plans for the West Bank, was needed to give the efforts to resolve the Palestinian issue a chance. Bahrain's King Hamad bin Isa Al Khalifa also confirmed his adherence to the cause of reaching "a just and comprehensive peace" via a two-state solution for the Israeli-Palestinian conflict following the announcement of the agreement with Tel Aviv on 11 September.