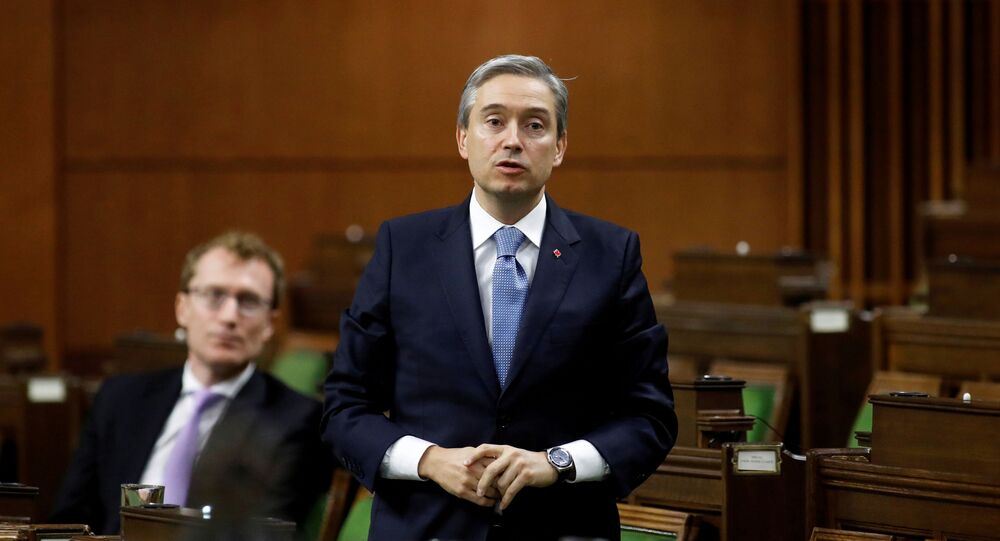 On Tuesday, Beijing's top legislative body, the Standing Committee of the National People’s Congress (NPC), passed a new national security law for Hong Kong that is seen by residents of the Special Administrative Region as a violation of their liberties. The legislation was signed by Chinese President Xi Jinping later in the day.

“Canada joins the international community in reiterating its serious concern at the passage of national security legislation for Hong Kong by the Standing Committee of the National People’s Congress of China,” Canadian Foreign Minister Francois-Philippe Champagne said in a statement. “This legislation was enacted in a secretive process, without the participation of Hong Kong’s legislature, judiciary or people, and in violation of international obligations”.

Champagne announced that the Canadian government would suspend the Canada-Hong Kong extradition treaty “immediately”, as a protest to the implementation of the new law, arguing that the process has “demonstrated disregard” for the autonomous region's basic law.

“This process demonstrated disregard for Hong Kong’s Basic Law and the high degree of autonomy promised for Hong Kong under the ‘one country, two systems’ framework. Hong Kong’s role as a global hub was built on that foundation. Without it, Canada is forced to reassess existing arrangements,” the minister said.

He added that Canada would also treat “exports of sensitive goods” to Hong Kong the same way as those destined for the Chinese mainland, noting that Ottawa “will not permit the export of sensitive military items” to the region.

In addition, Champagne said that the Canadian government has updated its travel advice for Hong Kong “in order to advise Canadians of the potential impacts of the new national security legislation”.

The new national security law for Hong Kong was passed by the Standing Committee of the National People’s Congress on Tuesday. It was signed the same day by Chinese President Xi Jinping.

The new law is claimed by Beijing to be aimed at strengthening security and safety, allowing the Chinese government to establish new departments and units in the special administrative region to handle national security cases. In particular, the legislation penalizes broadly-defined crimes of secession, subversion, and terrorism in Hong Kong, as well as collusion with a foreign country or external elements that would endanger national security.

A number of countries have expressed their concern about the new Hong Kong security law, which took effect immediately after its signing, including the United States and the United Kingdom which, after a 99-year lease, handed the city back to China in 1997 under a 1984 Sino-British Joint Declaration.

The UK condemned the legislation, saying that Beijing breached the Joint Declaration, which provides Hong Kong and the surrounding region with autonomy until 2047.

China rejected what it described as the “irresponsible and unwarranted” accusations, calling on London to “immediately stop interfering in Hong Kong affairs, which are the internal affairs of China”.

“The recent remarks by the UK side on the national security law for Hong Kong SAR are irresponsible and unwarranted. They represent a gross interference in China's internal affairs and run counter to the important principles of mutual respect for sovereignty and territorial integrity and non-interference in each other's internal affairs endorsed by the UN Charter and the Joint Communiqué of the UK and China on exchange of ambassadors,” said China's Ambassador to the UK, Liu Xiaoming, during a Wednesday meeting with UK Foreign Office permanent undersecretary, Sir Simon McDonald.