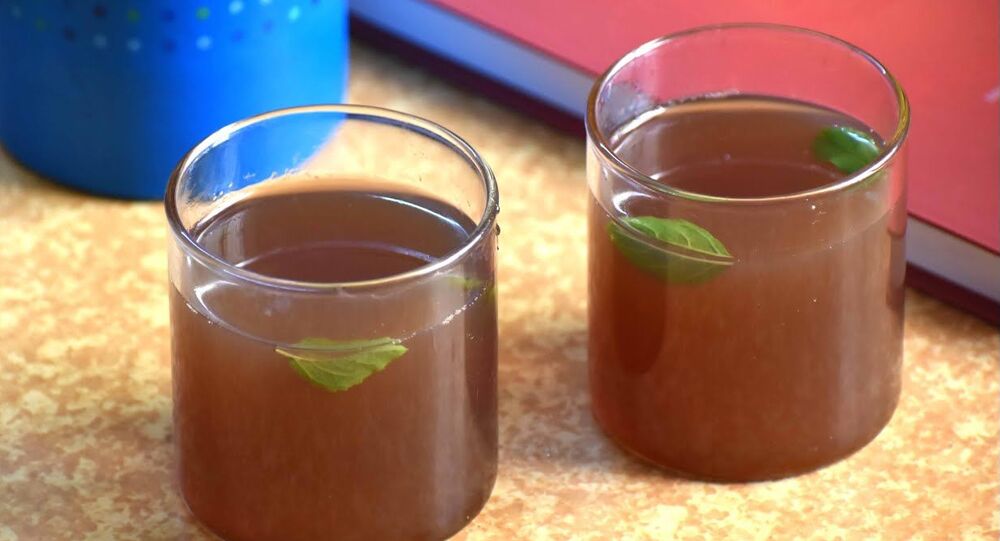 New Delhi (Sputnik): With no cure in sight for the coronavirus and the public healthcare system in shambles, many Indians are looking with suspicion at the country’s ability to battle COVID-19. People in India are now exploring the use of herbal tonics and medicines in their daily routine to boost their immunity against the contagious virus.

Cooped up in the house, people are getting increasingly anxious over the reports of hospitals brimming to their capacity and turning away patients due to a lack of beds. As the government anticipates the worst scenario ahead, Indians have picked up on the trend of incorporating immunity boosting herbal tonics and teas into their daily routine.

"We are falling back on home remedies to boost our immunity. I make sure that everyone in my family consumes giloy juice early in the morning and drink turmeric milk once in a day at least", Asha Sharma, a resident of south Delhi told Sputnik.

| Immuni-Tea | . . . Prepared from 4 ingredients which will help to boost immunity. . . . Preparation - After boiling 500 ml of water add 4-5 crushed cloves, 4-5 crushed peppercorns, 1-2 tbsps of grated ginger and 1 tbsp of grated turmeric or turmeric powder and switch off the flame. Close the lid and let it sit for 5-10 mins. Strain the tea out and have. . . . #immunitea #immunityboost #immunesupport #turmeric #cloves #peppercorns #ginger #kadha #coronakadha #homeprepared #tea #morningroutine #immunebooster #immunehealth #immunitytea #stayhome #staysafe

The country, having a wide gap between the doctor-patient ratio, with one public doctor for every 2,203 people in national capital Delhi, is currently the fourth worst-hit nation in the world and COVID-19 cases have been rising exponentially for last three weeks. With the biggest single-day jump of 12,881 infection cases in the last 24 hours, India's caseload mounted to 366,946 and 12,237 deaths.

“It's better to be safe by taking precautions using Ayurveda remedies as media reports on how the healthcare system is collapsing in the national capital are really troubling me", said Asha who is one among 77 percent of families in the country using Ayurveda as a treatment or supportive care, according to research by the Confederation of Indian Industry (CII).

The trend was also illustrated with a record of over one million downloads of federal ministry AYUSH's “Ayush Sanjivani” mobile application. It was designed to studying population behaviour and inform people on the prevention of coronavirus through traditional medicine.

The age-old practice of drinking the “magic drink” Kadha daily has also become a hit among millennials as its recipe has made its way to the Instagram feeds of influencers and is being circulated in family WhatApp groups.

Popular celebrity Chef Saransh Goila shared the recipe of ayurvedic “liquid gold” on his Instagram handle with 280,000 followers and said he has been drinking the immunity-boosting tea for three years now.

Not just for this season but for all! I have pretty much been drinking this ayurvedic liquid gold for years now but in the last year or so thanks to @docraash I've learnt to blend just the right ingredients. Some might say it's like having 'liquid biryani' 😁😝🙅🏼‍♂️ What do you add in your kadha and how is it different? Mine as you can see has 8 ingredients and I love this mix! . . . #Sadakchef #IndianFood #ayurveda #ayurvedalifestyle #tea #immunebooster #incredibleindia #Eatpraylove #healthyfood #healthyliving #tea #herbalife

The ayurvedic cocktail or Kadha is made by crushing and boiling medicinal plants such as giloy - known as "Amrita", which literally translates to "the root of immortality" and powerhouse antioxidants – ginger, black pepper, Tulsi (Basil), and Dalchini (Cinnamon), as per instruction by the AYUSH ministry. The ministry, which has been distributing the ayurvedic concoction, tablets, and nasal drops in containment zones, also recommends practising yoga regularly.

An initial study by the ministry shows “promising outcomes” and a majority of people under quarantine did not report any severe symptoms of COVID-19 when given AYUSH-based therapies as preventive measures, confirmed Vaidya Rajesh Kotecha, a top government official from AYUSH.

Vaidya Ram Manohar, Research Director at the Amrita Ayurveda School in Kerala and member of a COVID-19 task force, told Sputnik that with the burden on allopathic healthcare systems mounting, the central government should consider referring asymptomatic or patients with mild symptoms to ayurvedic centres.

"India has a pluralistic health system and it would be a very wise way to utilise the resources to the optimum level. In Delhi already, some patients with COVID-19 have been referred to the Brahm Prakash Ayurved Charak Sansthan Hospital where they are allowed to get Ayurveda's supportive care", he added.

Ayurvedic doctor Manohar explains that even allopathic doctors are treating patients with hit and miss methods and it would only be fair to give Ayurveda a chance for alternative care rather than denying treatment to patients with hospitals becoming overwhelmed.

“Ashwagandha, giloy, yashtimadhu, and pippali are the herbs which have been approved for use by the ministry because of prior studies, these may not be the best medicine that Ayurveda has to offer but these four herbs received clearance as per the current research paradigm", he explained

The Indian state of Kerala has been lauded both by national and international health experts for success in containing the coronavirus virus infection despite becoming the first state to be hit by the novel virus with Wuhan returnees.

The state, known as the cradle of Ayurveda having 1,400 Ayurveda-associated industries with a total turnover of $37 million and export of $8.3 million in 2016, has 1,366 cases as of now. Financial hub Maharastra and Delhi have remained worst-hit with cases reaching five and six digits.

The Kerala state government has been promoting Ayurveda as a lifestyle and supportive care by focusing on improving the immunity of people via natural medicines. It included Ayurveda practitioners in its early detection system and even set up a State Ayurveda COVID-19 Response Cell (SACRC), to work on Ayurvedic formulations and drugs for the management of the coronavirus.

Vaidya Manohar also says that patients with critical ailments like heart disease, history of cancer, or other life-threatening diseases should consult a professional before taking any self-medication or self-help through Ayurveda.