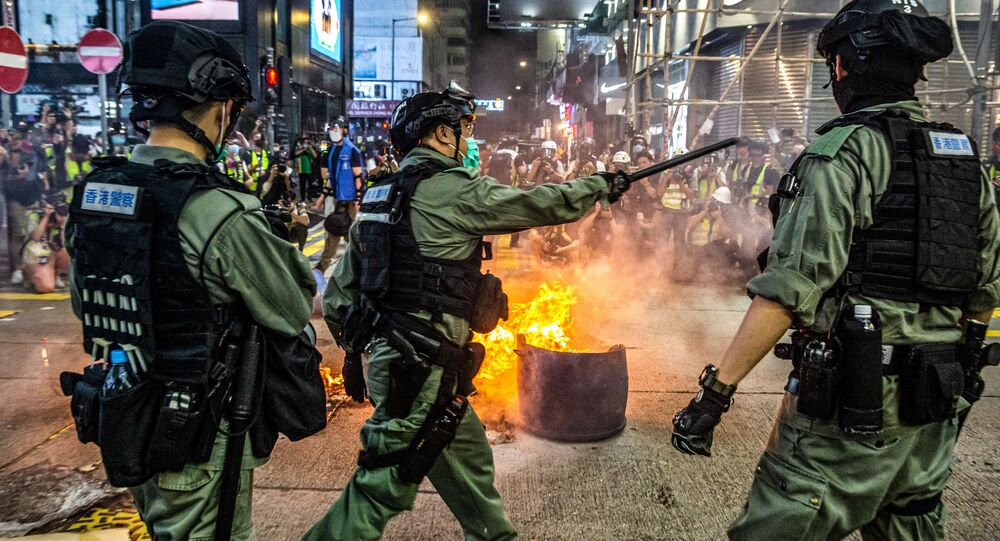 Beijing shot down an attempt by the US to hold a UN Security Council meeting on Hong Kong last week, with President Trump responding by threatening to revoke the region's special trade status, and banning flights from China to the US as part of a broader spat connected to the coronavirus.

The political situation in Hong Kong is a domestic Chinese matter, and any foreign intervention with respect to Beijing and the special administrative region is unacceptable, Russian Foreign Ministry spokeswoman Maria Zakharova has announced.

"Russia respects the sovereignty and territorial integrity of the People's Republic of China. We consider the situation in Hong Kong to be an internal matter of China and call on foreign forces to end any interference in relations between the central government and its special administrative region," Zakharova said Thursday at a press briefing.

According to the spokeswoman, the US and UK attempt to initiate a discussion on Hong Kong at the Security Council last week was aimed more than anything else at 'settling scores' with a geopolitical adversary, and therefore "unacceptable" to Moscow.

"Attempts to fill the Security Council's agenda with topics that go beyond its mandate are counterproductive and threaten to reduce its effectiveness and weaken the authority of this body. It's worth recalling that the Security Council has a crucial importance to the modern system of international relations," the spokeswoman stressed.

Already tense relations between the US and China deteriorated again last week over legislation on Hong Kong's national security, which Washington has claimed would bring about a de facto end to its special 'One Country - Two Systems' autonomous status. President Trump has threatened to sanction China and withdraw the US's special trade status with Hong Kong, which is a major Asian financial hub. Beijing has rejected Washington's claims, and indicated that Hong Kong affairs are its internal matter.

© AP Photo / Ng Han Guan
US Calls on Chinese People to Carry Out ‘Acts of Bravery’ as Coronavirus Spat Escalates - Video
On Wednesday, the US Transportation Department announced the suspension of Chinese passenger air service between China and the United States beginning on June 16, with the ban attributed to tensions over Hong Kong and the raging coronavirus pandemic.

Hong Kong has faced multiple waves of large-scale protests beginning in March 2019, with the demonstrations initially triggered by the local government's move to amend local laws to allow criminal suspects to be extradited to mainland China for prosecution. The bill has since been dropped, but protests have continued amid demands by protestors to release everyone arrested in the unrest, and to hold police officers accountable for applying excessive force against demonstrators. All told, the violence has caused at least two deaths, over 9,000 arrests, and over 2,600 injuries, including hundreds of injuries among police and onlookers expressing pro-China sympathies.