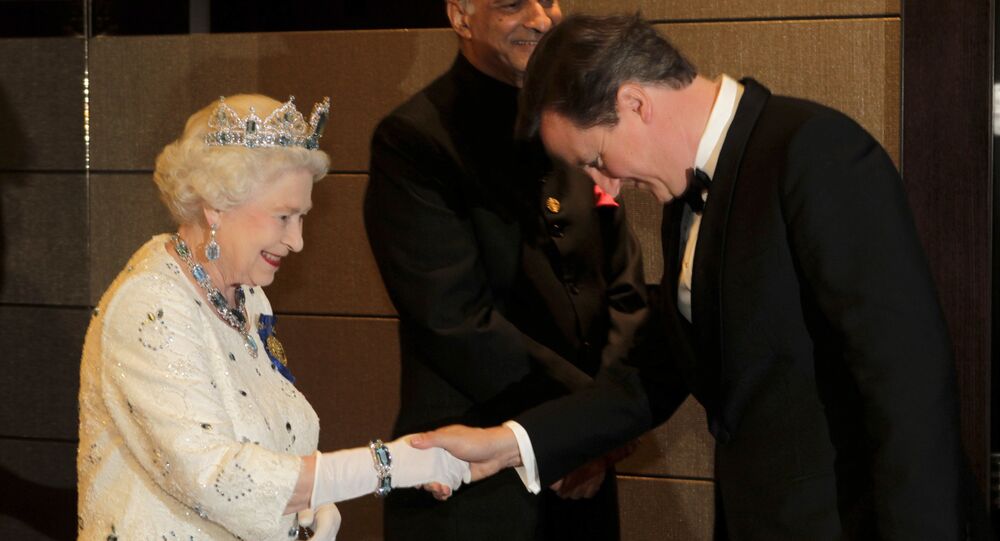 Prime Minister Boris Johnson has been accused of lying to the Queen about the reasons for proroguing Parliament. Now it emerges he may not have been the first Conservative PM who tried to blur her position as head of state.

David Cameron has revealed that, during the Scottish independence referendum campaign in 2014, he asked the Queen to lay aside her neutral role as head of state and speak out against Scotland breaking away from the United Kingdom.

Mr Cameron, who was Prime Minister from 2010 until he resigned in the wake of the Brexit referendum vote in 2016, said he asked her for a "raising of the eyebrow" to hint at her opposition to an independent Scotland.

For an Eton and Oxford-educated posh bloke married to an aristocrat, David Cameron can behave like a complete oik. No PM talks about what they did or did not discuss directly or indirectly with the Queen. It just isn't done. Disclosing confidences just to sell a book. Cheap.

​The Queen, who has a home at Balmoral in the Scottish Highlands, declined and stayed neutral, although she was reported as telling a well-wisher: "I hope people will think very carefully about the future."

David Cameron has admitted forcing the Queen to intervene against the SNP during #indyref in 2014. 'We had the Queen and Gordon Brown, who did they have? Limmy and Chuck D. No contest,' concluded Cameron.

​Mr Cameron, who has recently published his memoirs, told the BBC he spoke to the Queen's private secretary but said he was "not asking for anything that would be in any way improper or unconstitutional, but just a raising of the eyebrow, even, you know, a quarter of an inch - we thought would make a difference."

As the opinion polls suggested the Yes campaign - which was supported by the Scottish National Party (SNP) - was neck and neck with the No vote, Mr Cameron and Labour Party leader Ed Miliband both visited Scotland in a bid to persuade voters to stay with England, Wales and Northern Ireland in one nation.

And here come the Scottish papers with the story about David Cameron and the Queen https://t.co/iCjgoItFLv

​Mr Miliband’s appearance alongside Mr Cameron rebounded catastrophically, with Labour losing all but one of its MPs north of the border in the 2015 general election.

But 55 percent of Scottish voters opted to stay in the UK, bringing disappointment for SNP leader Nicola Sturgeon, who is campaigning for a second vote on the issue after Brexit.

Mr Cameron was criticised when he was caught on camera telling a colleague that the Queen had "purred down the line" when he called her to inform her Scotland had rejected independence.

British political and diplomatic protocol states that conversations between Prime Ministers and the monarch should remain confidential.

Former SNP leader Alex Salmond said the fact the PM had asked for the Queen’s help was "not only totally improper but an indication of how desperate prime minister Cameron" was at the time.