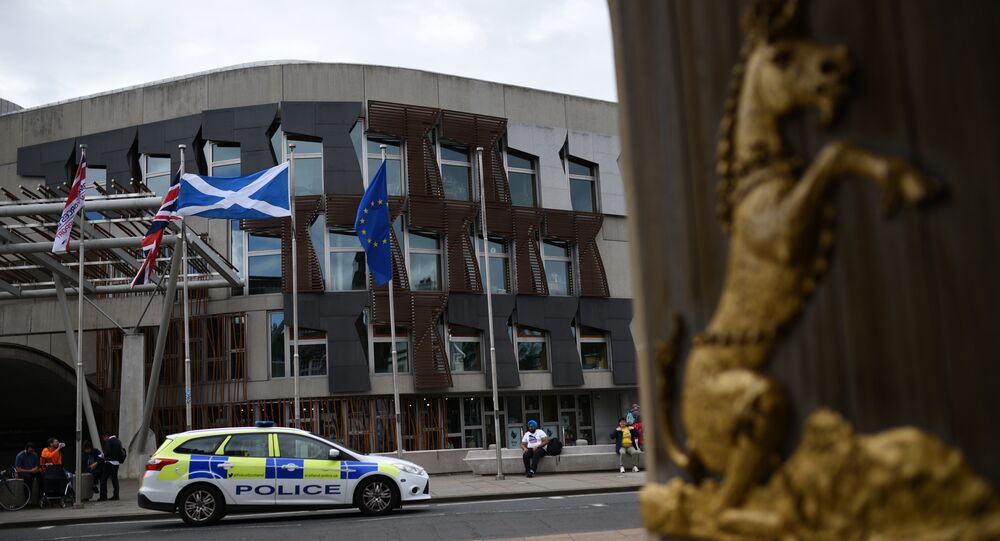 Today marks the 5 year anniversary of the Scottish Referendum. With polls continuing to show people in favour of independence stagnant around the 50% mark, is there still an appetite for independence in Scotland?

Sputnik: First of all, can I just get your reaction to the yellowhammer documents being released?

John Kelly: Well, I started off fairly optimistically as a yes supporter because the polls had been more or less even the night before, maybe a slight no lead. And the day started actually with Andy Murray coming out for Yes, which was unbelievable. I don't think anybody saw that coming. So that put a spring in everyone’s step. As the day wore on there started to come a few indications from inside of in the 'Better Together' campaign, and they were fairly confident and that they saw themselves wanting by quite a substantial margin.

In fact, they overstated how well they were going to do, but as the day wore on a became more pessimistic. There was quite a depressing evening, although, you know, 45% yes, was certainly higher than seemed likely for most of the long campaign. So it's a very dramatic swing to Yes, but just not quite enough in the end.

Sputnik: What do you think about Boris Johnson's current negotiation tactics with the EU? Do you think he's really looking for a new deal?

John Kelly: Oh, absolutely not. All the genuine polls on Independence this year have shown a clear swing towards Yes. The Lord Ashcroft poll in August, showed a Yes majorities. That was the first time any poll for a couple of years as shown a yes majority.

And yet it was being presented in the press release as an independence poll. The newspapers have bought that hook, line and sinker. So that should be completely ignored the credible polls on independent have tended to show a sort of ‘even stevens’ position.

Most of the polls have seen have been from firms that have tended to show No doing a little bit better than they have done another firm. So it's likely actually that if we'd seen a broader range of polling firms conducting polls that maybe we would have seen more of a yes lead. So I actually the possession is quite favourable for Yes at the moment according to most credible polling.

Sputnik: There's been a lot of talk about some sort of agreement between the Brexit Party and the Conservative Party. Do you think the two will be able to come to an arrangement prior to a general election?

John Kelly: Well it's hard to see it being approved because obviously the Conservatives have totally set himself against and the Labour Party are divided. We think that perhaps the London leadership: Jeremy Corbyn and John McDonnell are more favourable to maybe cutting a deal with the SNP and the Scottish Labour Party are trying to pull them back from that.

Certainly, the prospects would look more favourable if there was a Labour government and then those divisions might produce some sort of tension that would perhaps lead to an independence referendum sooner or later. But certainly for as long as there is a Conservative government. Nicola Sturgeon is going to have to find a way of holding a vote on independence without direct permission from the UK. I think that's pretty clear.

So she's going to have to find the plan B if she wants to do that. But there are plan B's available. I mean, she could hold a consultative referendum without Westminster permission or she could use the next Scottish Parliament election to get an outright mandate for independence. If you put that in the SNP Manifesto. So it's just a question of whether she's willing to go for that plan B, rather than stick to the insistence that there has to be an agreed process.

Sputnik: Do you think will be leaving the EU on the 31st of October this year?

John Kelly: Well, certainly all the indications are that they should gain seats. And it's difficult because we thought that, at the start of the outset of the 2017 general election campaign it looked very favourable for the SNP and it didn't turn out that way. They ended up losing seats.

So you can never quite tell. You know, the campaign can change things dramatically. But certainly if it took place tomorrow, if there was an election tomorrow, it looks like the SNP would make sweeping gains from the Conservatives and from Labour, and really the only party of it perhaps wouldn't make games against would be the Liberal Democrats. So they perhaps would take as much as 50 seats 52 seats, so it would be a dramatic gain on what happened in 2017.