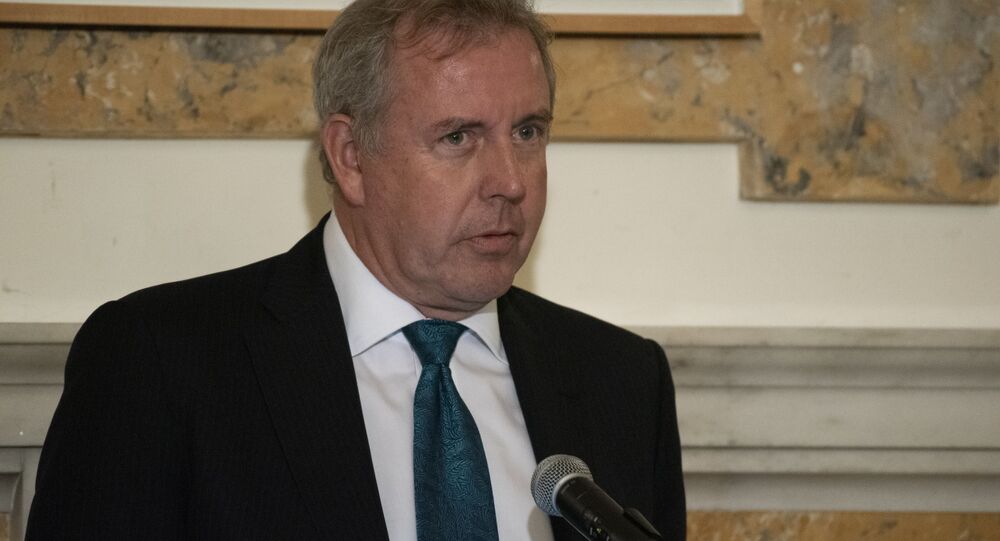 In a string of tweets about the UK posted 8th July, President Trump said the US "will no longer deal with" ambassador Kim Darroch, and slammed outgoing Prime Minister Theresa May and her approach to Brexit.

UK police have been urged to open a criminal investigation into the leak of diplomatic emails which described Donald Trump and his administration in damning terms. The news follows the government launching an internal inquiry into the fracas, stating it "utterly deplores" the publication of the memos.

Emails from Kim Darroch, UK Ambassador to the US, leaked to the Mail on Sunday showed the senior diplomat - and potentially others among his staff - believed the US government to be "uniquely dysfunctional" and "divided", and wondered whether it would “ever look competent”. As a result, he advocated making “points simple, even blunt” in order to communicate with the President.

Tom Tugendhat, chair of the foreign affairs committee, made the request to police in an official letter to the Met Police - it’s a break with the government’s official line on the incident, which is police shouldn’t be involved unless its internal inquiry found evidence of criminality.

Nonetheless, others are going “off-script” too - Foreign Secretary and Conservative leadership candidate Jeremy Hunt has told The Sun officials are investigating whether a country such as Russia, Iran or China hacked the memos, then used an intermediary to disseminate the material, in order to “sow discord between the US and UK”.

Saying he was “extremely concerned” by the leak, Hunt told the newspaper it would be “massively concerning” if it was the act of a “foreign, hostile state”.

“I’ve seen no evidence that’s the case, but we’ll look at the leak inquiry very carefully. They are going to follow all avenues of inquiry to try to understand how this happened. That’s something that will be considered,” he said.

​Hunt’s avowedly evidence-free suggestion will no doubt circulate throughout the mainstream media, already awash with at-times bizarre and outlandish theorising as to how the apparently heavily encrypted communique found its way into the hands of journalists.

However, former Ambassador to Uzbekistan Craig Murray offers a rather more anodyne explanation - he notes Foreign & Commonwealth Office internal communications, while encrypted, are “widely distributed” with “hundreds of other recipients” across many key government agencies and embassies, meaning the field of potential suspects is “immense”. Moreover, Darroch’s assessment of Trump “is no way out of line” with the media’s overriding depiction of the President, and the leaks “neither tell us anything startling nor obviously benefit any political faction in the UK”. Hence, he suggests the most likely source of the communications is “a former subordinate taking revenge for years of bullying, or a present one trying to get rid of an unpleasant boss”.

“Darroch is a rude and aggressive person, not pleasant at all to subordinates. He rose to prominence within the FCO under New Labour at a time when right-wing, pro-Israel foreign policy views and support for the Iraq War were important assets to career progress, as was the adoption of a strange ‘laddish’ culture led from No. 10 by Alastair Campbell, involving swearing, football shirts and pretending to be working class. Macho management was suddenly the thing,” Murray explains.

​At a time when Murray was still in the diplomatic service, he was once “astonished” when Darroch - then in charge of the FCO’s media operations - called him “f***ing stupid” over the phone due to a disagreement on a minor policy matter, aggression he’d hitherto “never come across” in the FCO.

“People who worked directly for him had to put up with this kind of thing all the time,” he concludes.