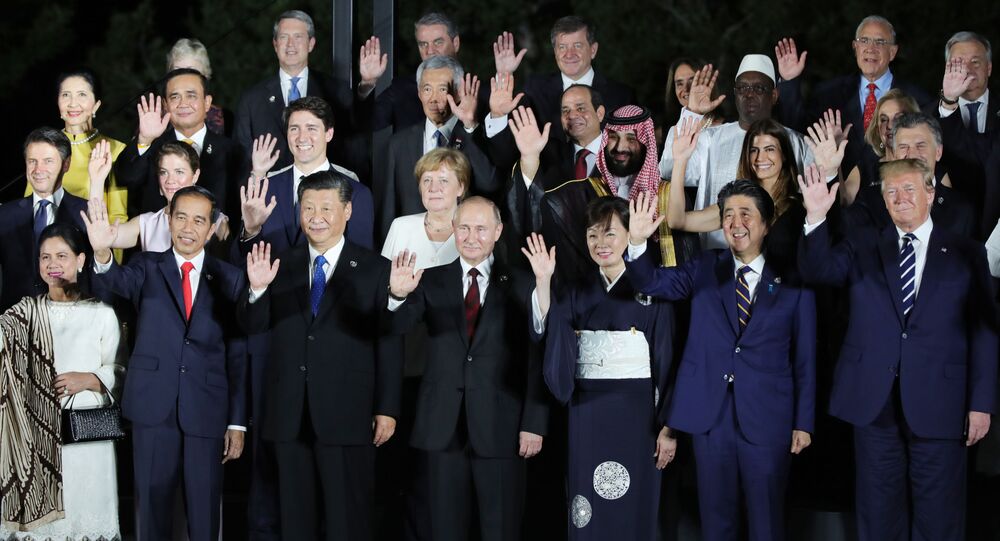 This year's international gathering of the leaders from the world's major economic powers came amid the ongoing trade spat between the US and China, tensions between the US and Iran, and efforts by Moscow and Washington to negotiate a strategic arms limitation treaty that may very well prevent a new nuclear arms race.

The first day of the G20 summit in Osaka, Japan got off to an active start on Friday, with productive talks reported between Presidents Putin and Trump, Chinese President Xi Jinping announcing a massive effort to cut tariffs and trade restrictions amid the trade spat with Washington, French President Macron threatening not to sign the final declaration over the climate change issue, and Indian Prime Minister Modi refusing to scrap retaliatory tariffs against Washington amid growing trade tensions between Washington and Delhi.

However, together with the serious business, Friday's meetings were also packed with fun-to-watch moments in the interactions between world leaders, including numerous jokes, funny quotes, and memorable photos and videos showing politicians attempting to protect their countries' interests and image on the world stage.

During their face-to-face meeting on Friday, Presidents Putin and Trump discussed many things, from international security to bilateral trade to crises and wars and the fate of a key arms treaty. However, one moment from their meeting that stood out was Putin and Trump's reaction to the tired claims about Russian meddling in the US elections.

Asked by a reporter whether he would tell Russia "not to meddle" in future US elections, Trump sarcastically turned to the Russian president and quipped "Don't meddle in the election," wagging his finger and smirking. A visibly amused Putin laughed, clearly tickled by the US media's obsession over the debunked claims of Russian interference in US politics and Trump's supposed 'collusion with the Kremlin'.

Another photo opportunity which got many talking was outgoing Prime Minister Theresa May's frosty visage and awkward handshake with Putin, with May seemingly barely able to contain her disdain, while the Russian president diplomatically put on a faint smile for the cameras.

© Sputnik / Ilya Pitalev
June 28, 2019. The Russian President Vladimir Putin and the prime minister of Great Britain Theresa May during the meeting on the sidelines of the summit in Osaka

May's tenure as prime minister, cut short by her failure to reach an agreement with Brussels on Brexit, saw Russia-UK relations plummet after London accused Moscow of involvement in the poisoning of a former Russian spy in southern England in March 2018 without providing any substantive evidence. And while some mistook May's cool attitude toward Putin as a sign of her sour overall mood given her impending departure, snaps of her meetings with other leaders soon confirmed that she was just put off by Putin.

A similarly chilly moment was snapped by the cameras at one of the summit's sessions between Presidents Trump and Xi, although thankfully, Japanese Prime Minister Shinzo Abe was seated between the two leaders to ease tensions.

'Humiliation' of the Spanish Prime Minister

Another incident which picked up attention was President Trump's apparent snub of Spanish Prime Minister Pedro Sanchez as he attempted to strike up a conversation. Soon after the greeting, Trump pointed his finger at Sanchez's seat, with the prime minister left grinning and 'obeying' Trump's instruction to sit down

Another awkward moment involving Trump took place when he chose to forgo the traditional handshake with Abe and Indian Prime Minister Narendra Modi in favour of a fist bump while offering an indecipherable explanation of why he did so. The all-smiles icebreaker did not result in Delhi agreeing to remove its retaliatory tariffs on dozens of US-made goods over Washington's removal of India from its Generalised System of Preferences (GSP) programme.

Clash of the EU Titans

Finally, in a somewhat odd exchange between European Union President Donald Tusk and European Commission President Jean-Claude Juncker, the senior officials revealed their attitudes to Putin's recent interview with the Financial Times, in which the Russian president opined that liberalism had become "obsolete" had "outlived its purpose" after coming into conflict "with the interests of the overwhelming majority of the population."

Following a long explanation by Tusk on his "strong disagreement" with Putin in which the Polish politician  emphasised that Europeans will continue to "firmly and unequivocally defend and promote liberal democracy," freedoms, human rights and the rule of law, Juncker quipped back that he didn't bother reading the interview.

With Tusk claiming he had time to read the long Putin interview due to jetlag on the trip to Japan, Juncker said he had jetlag too, but said "this was not a sufficient reason to read the interview." Instead, he said, "for once, I was using this jetlag to read the communique which normally I'm not doing."

Day two of the G20 summit will kick off on Saturday, and is expected to feature the much-awaited face-to-face meeting between Presidents Trump and Xi amid the escalating trade war between the two economic superpowers. President Putin, meanwhile, is expected to meet with Abe to discussed the stalled peace treaty talks. Trump will also meet Turkish President Recep Tayyip Erdogan amid the increasingly chilly relationship between the two NATO allies over F-35s, Russian air defence systems, and the US refusal to extradite an Islamic preacher Ankara said was behind a 2015 coup attempt.