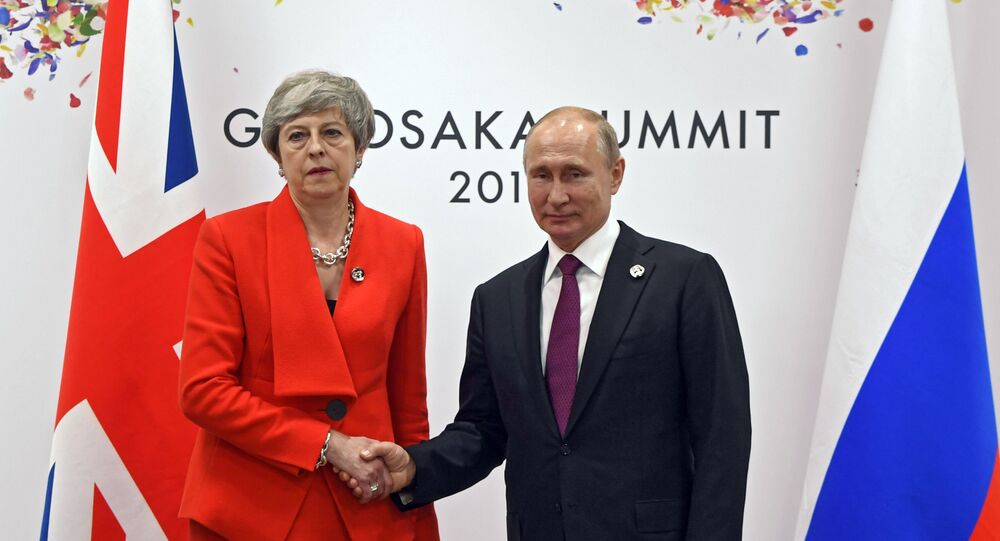 Theresa May and Vladimir Putin met face-to-face on day one of the G20 summit in Osaka, but their awkward handshake was viewed as a sign of continued tensions between the two world powers.

As the outgoing UK prime minister and the Russian president posed in front of cameras on the margins of the G20 summit, the coldness was almost palpable.

While Putin appeared to be wearing a faint grin, May accepted his offer for a handshake with a deadpan expression on her face.

A frosty-looking Theresa May meets Vladimir Putin for one-to-one talks, their first since former spy Sergei Skripal and his daughter Yulia were poisoned in Salisbury last yearhttps://t.co/C1HxVZvmZ1 pic.twitter.com/bSwHgmrUfO

Twitter users could not but talk it through, with some joking that this was not the coldest Theresa May has ever looked.

Nothing personal Vlad, she looks like that all the time.

She doesn’t look particularly thrilled does she? Putin on the other hand looks totally at ease.

This was their first meeting since the Salisbury poisoning, which left relations between Britain and Russia in tatters.

To recap, former Russian military intelligence officer Sergei Skripal and his daughter Yulia were exposed last March to what London claimed was a deadly nerve agent.

UK officials jumped on the claim that the deadly substance was produced in Russia, but the Porton Down lab that investigated it had been unable to verify the country of origin.

Russia has staunchly denied allegations of involvement and said there was no evidence thereof. The Russian embassy in the UK said that Moscow was eager to cooperate, but Britain turned down offers for a joint investigation, as well as requests for access to the probe and the two victims.

© AP Photo / Ben Birchall/PA
Various police, Army and other emergency service personal attend a scene in Durrington near Salisbury, England, Monday March 19, 2018, as a car is taken away for further investigation into the suspected nerve agent attack on Russian double agent Sergei Skripal and his daughter Yulia

While the Skripals had survived the apparent attack, a British woman called Dawn Sturgess, who was leaving in the neighbouring Amesbury, died in July 2018 a week after apparently having been poisoned by the same toxin.

London later brought charges against two Russian citizens, who said they were visiting Salisbury on the day of the incident as tourists and dismissed claims of being involved with Russian military intelligence.

In March 2019, the Russian embassy said in a report that Sergei Skripal is not known to have interacted with the outside world since recovering from the attack, while his daughter Yulia only made a phone call, two police statements and a video statement in April-May 2018. "The UK’s assertions of the Skripals’ freedom of communication are thus not supported by facts," the embassy concluded.

Putin and May Speak Out Ahead of the Summit

Preparing for talks with Vladimir Putin, Theresa May touched upon the Salisbury poisoning again, calling for the suspects to be 'brought to justice'.

“It’s not business as usual and it can’t be business as usual with Russia until they stop the sort of acts we have seen them doing around the world,” she said in one of her last interviews as prime minister on Thursday.

“I want to see the individuals, against whom charges have been brought, brought to justice.”

Her comments came after Vladimir Putin gave a rare interview to the Financial Times, in which he downplayed the incident as a “spy story”, expressing confidence that both Russia and the UK are interested in fixing ties.

Sergei Skripal was convicted in Russia in 2006 for acting as a double agent for the UK’s MI6, but settled in Salisbury after a spy swap in 2010.

“Treason is the gravest crime possible and traitors must be punished,” Putin added. “I am not saying that the Salisbury incident is the way to do it. Not at all. But traitors must be punished. This gentleman, Skripal, had already been punished. He was arrested, sentenced and then served time in prison. He received his punishment. For that matter, he was off the radar. Why would anybody be interested in him?"