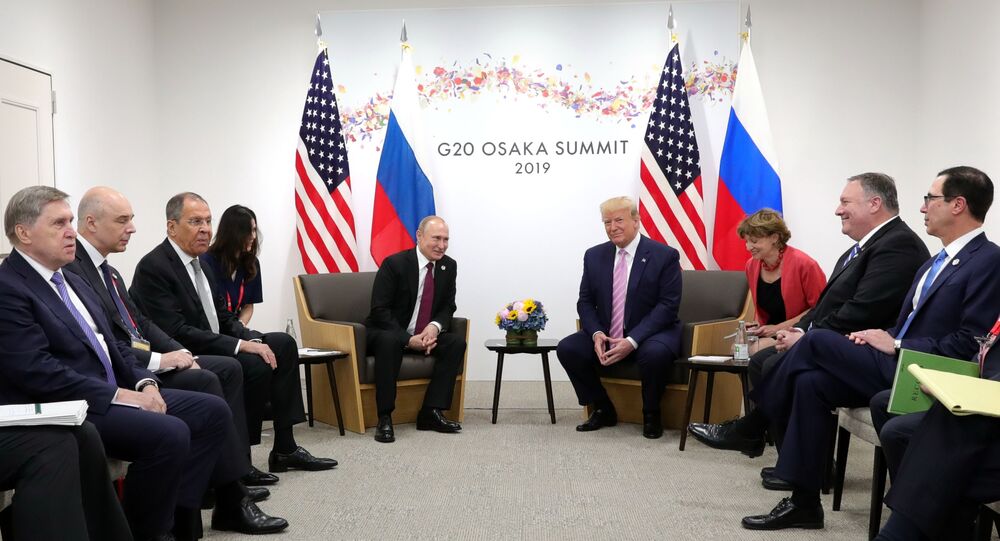 The long-awaited sit-down meeting between the Russian and US presidents, the first since last July, was expected to feature discussions on a broad range of important topics, from bilateral ties and trade to international and security affairs, including the fate of an important treaty aimed at preventing a new nuclear arms race.

Immediately after the Russian and US delegations gathered in their meeting room and opened the floor to journalists for a brief introduction, a reporter shouted out to President Trump, asking him to "tell Russia not to meddle in the elections!"

The moment, caught on video, evoked an immediate laugh from Putin, with Trump turning to the Russian president and quipping "Don't meddle in the election," waging his finger and smirking.

The leaders' nonchalant reaction to the meddling claims followed years of allegations by US officials and the mainstream media about alleged Russian interference in US politics and President Trump's 'collusion' with the Kremlin, with neither of the claims ever substantiated despite years of investigations.

Observing the throng of journalists noisily jostling their way into the meeting room to photograph the leaders and ask questions, Trump quipped that his meeting with Putin was something akin to the Oscars. "It's like the Academy Awards used to be," he told the Russian president, before adding that it was a "great honour" to meet with him again.

"His representatives, my representatives have many things to discuss, including trade and including some disarmament, little protectionism, perhaps," Trump continued. "We are looking forward to spending some very good time together."

Putin returned Trump's good graces, recalling that the face-to-face talks were the first since July 2018. "We haven't seen one another in a long time, from our meeting in Helsinki," Putin said. "Of course, our officials have been working together, and have given us a good opportunity to follow up on what was agreed in Helsinki," he added.

With journalists reluctant to leave the room for the closed portion of the talks, Trump reportedly said "Get rid of them," and turned to Putin, quipping: "Fake news is a great term, isn't it. You don't have this problem in Russia but we do." Putin reportedly responded, in English: "We also have. It's the same."

Along with Trump and Putin, the meeting was attended by other senior Russian and US officials, including Foreign Minister Sergei Lavrov, Kremlin spokesman Dmitri Peskov, and Finance Minister Anton Siluanov, and on the US side, Secretary of State Mike Pompeo, Treasury Secretary Steve Mnuchin, and National Security Advisor John Bolton. President Trump's daughter Ivanka Trump and son-in-law Jared Kushner, who serve as advisers to the US president, were also present.

The more serious, closed-door portion of the Putin-Trump meeting reportedly lasted about 90 minutes, thirty minutes more than planned, with the leaders discussing subjects including the situations in or with respect to Iran, Syria, Venezuela and Ukraine.

Foreign Minister Lavrov later confirmed that "questions concerning strategic stability were discussed," likely referring to the Strategic Arms Reduction Treaty (New START) and the Intermediate-Range Nuclear Forces Treaty, with the US kicking off the procedure to scrap the latter in February, prompting Russia to respond in kind earlier this month.

The nuclear arms issue was one of the most important issues during the talks for the Russian side. On the eve of the summit, Putin told the Financial Times that Moscow was concerned about a lack of practical steps from the US side about renewing New START before it expires in 2021, saying that talks were necessary now to ensure that the key nuclear arms limitation treaty remains in place.

President @realDonaldTrump just concluded his meeting with President Putin. They both agreed that improved relations was in each countries’ mutual interest and the interest of the world. They also discussed the situations in Iran, Syria, Venezuela, and Ukraine.

The White House later confirmed that strategic arms talks had taken place, and that the countries would "continue discussion on a 21st century model of arms control, which President Trump stated as needing to include China." In recent months, US officials have repeatedly mentioned the need to incorporate China's nuclear arsenal in any strategic arms treaties, despite Beijing's considerably smaller nuclear stockpile compared to those of the US and Russia.

© Sputnik / Vladimir Rodionov
A bundle of three Soviet RSD-10 missiles prepared for demolition at the Kapustin Yar launch site. The missiles were destroyed in accordance with the INF Treaty.

Trump Gets Invite to Celebrate Victory Day in Moscow

During their meeting, President Putin invited Trump to attend celebrations next May dedicated to the 75 anniversary of victory in the European Theatre of World War II. Traditionally, leaders invited to such celebrations get the opportunity to attend the parade on Red Square. The last US president to attend the Victory Day parade was George W. Bush in 2005.

A Russian presidential aide confirmed to Russian media that Trump had a "very positive reaction" to the invitation, with the leaders also briefly discussing the roles both countries played in defeating Nazism, and the major contribution made to victory by the Soviet people.

With the Osaka meeting, Donald Trump has now met with Vladimir Putin for one-on-one talks six times, with close to a dozen reported telephone conversations also taking place since Trump's election in 2016.

Despite the apparent positive dynamic between the two men, relations between Russia and the US have remained tense for over five years, with ties deteriorating drastically in early 2014 in the aftermath of a US and EU-backed coup in Kiev, which prompted the Crimean peninsula to break off from Ukraine and rejoin Russia following a referendum. Moscow has marked concerns over US sanctions policy, as well as the continued NATO buildup along Russia's borders in Eastern Europe, and the construction of missile shield components in Romania and Poland, which Russia says could be converted for offensive purposes. The two powers have also voiced disagreements on numerous conflicts and crises around the world in countries such as Venezuela, Syria, and Iran.

Commenting on Friday's meeting, Dr George Szamuely, a political scientist and author, said it was clear that "the personal rapport between the two presidents is very real."

"It is striking, for example, that Putin invariably refers to Trump as 'Donald' when speaking about him to journalists. That is quite astonishing because Russians are very punctilious when it comes to formalities," Szamuely said.

At the same time, the analyst argued, Trump's motivation for improve Russian-US relations is connected "with his conviction that any future threat to the United States emanates from China. Russia, for its part, has sought escape from the dreadful relations with the United States that characterised the Obama years."

Despite the personal rapport between the two men, an improvement in relations isn't likely any time soon, according to Szamuely.

"First, Congress will very likely push ahead with impeachment of Trump. And while Special Counsel Robert Mueller found no collusion between Russia and the Trump campaign, the lengthy impeachment process will keep the subject of Russia in the headlines and will ensure that Trump takes no risks in reaching any far-reaching agreements with Putin. Second, Trump's national security team will seek to undermine any initiatives of Trump's when it comes to Russia. Mike Pompeo and John Bolton are true believers; they really hate Russia," he said.

"They are not pragmatists of the Nixon-Kissinger mould…Whatever Trump tries to strengthen ties to Russia, they will work against. They, unlike Trump, are skilled Washington players, and they are likely to prevail against their boss. That could change if Trump decides to fire his national security team. Otherwise, nothing much can be expected until 2021," the analyst concluded.

Live Updates: Putin Holds Talks With Trump, UK PM May on Day One of G20 Summit in Osaka

Putin, Trump Meet on the Sidelines of G20 Summit in Osaka (VIDEO)