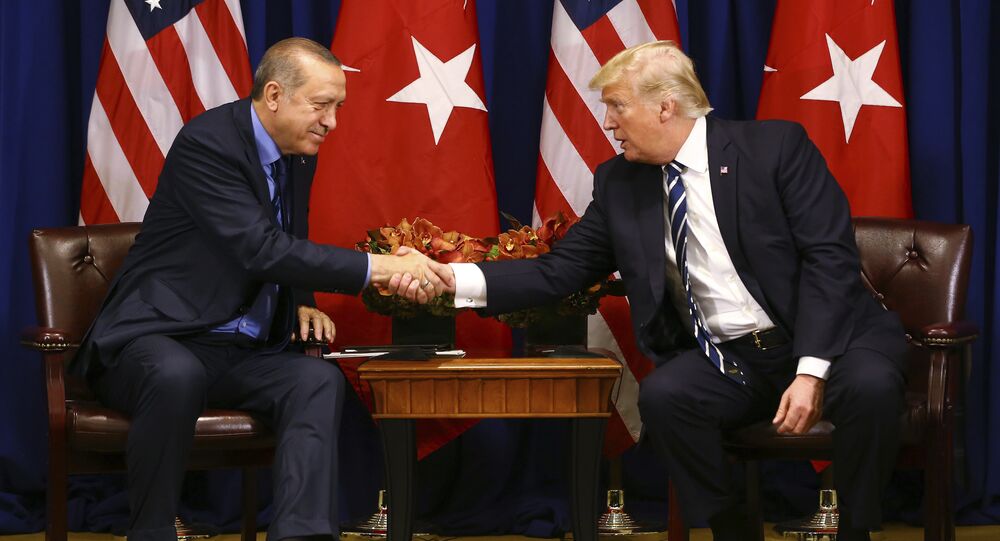 The President of the United States Donald Trump has held a telephone conversation with his Turkish counterpart Recep Tayyip Erdogan.

According to the Anadolu Agency citing informed sources, the White House's written statement after a phone conversation between the US and Turkish presidents differs from what actually has been discussed between the two presidents.

"In an answer to President Erdogan's highlighted request from Washington to stop providing arms to the PYD/YPG terrorists in Syria within the scope of fighting against terrorism, President Trump said the United States are no longer providing PYD/YPG with weapons," a source told the news agency.

According to the media outlet, Donald Trump did not discuss with Recep Tayyip Erdogan the growing violence during the Turkish operation in Afrin. Separately, Reuters cited a Turkish sourse as saying: "The two leaders' discussion of Operation Olive Branch was limited to an exchange of views."

However, according to the White House statement, Trump "urged Turkey to deescalate, limit its military actions, and avoid civilian casualties," something that, according to media reports, the US president didn't say.

"He urged Turkey to exercise caution and to avoid any actions that might risk conflict between Turkish and American forces," the White House added.

'Coalition Forces Have Inherent Right to Defend Themselves'

At the same time, US-led coalition spokesman Colonel Ryan Dillon said, "Clearly we are very alert to what is happening, specifically in the area of Manbij because that is where our… coalition forces are."

"The coalition forces that are in that area, have an inherent right to defend themselves and will do so if necessary," he added.

The statement came in the wake of a report by Turkish NTV channel, saying that Turkish Foreign Minister Mevlut Cavusoglu said the US Secretary State had proposed establishing a 30-kilometer security area in the north of Syria in order to avoid possible clashes between the US and Turkish militaries.

This followed President Erdogan's announcement that Turkey will "completely clear the region of terrorists, beginning with Manbij and throughout our entire border [with Syria], ensuring our security."

Commenting on the operation in an interview with Sputnik, Turkish Deputy Prime Minister Mehmet Simsek emphasized, "We have had 700 incursions, attacks along the border where Afrin is, we have had a lot of terrorist activities that were done through infiltrations from Afrin. So this is not about intervening in Syria. We have no interest in a single inch of Syrian territory. We want a united Syria, territorial integrity, a strong, stable and prosperous Syria, it's in our economic and security interest."

On Wednesday, Turkish and Kurdish representatives shared conflicting reports on casualties on the fifth day of the Afrin operation. While the Turkish military said that a total of 287 terrorists had been killed in the campaign, a YPG militia representative speaking to Sputnik challenged the Turkish military's claims, saying that no more than 15-20 Kurdish militiamen had been killed.

© AP Photo / Lefteris Pitarakis
Casualties Mount on Day Five of Turkey's Operation Olive Branch in North Syria
Last Saturday, the Turkish Armed Forces announced the launch of the Olive Branch operation against Kurdish forces in Afrin. It began with air raids and shelling. On Sunday, it moved to the ground phase with the use of tanks and other armored vehicles.