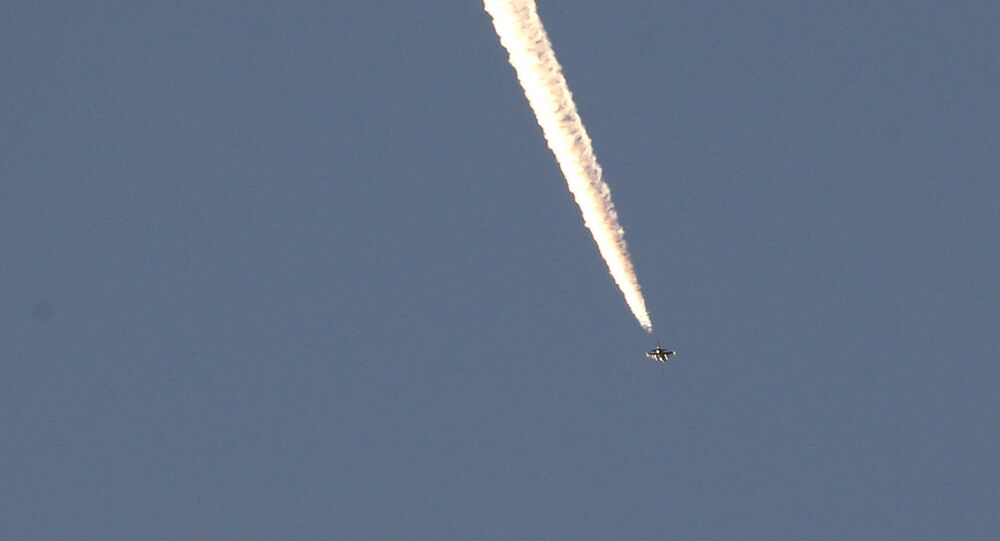 The Turkish Prime Minister Binali Yildirim stated that the country's warplanes have bombed YPG, PYD targets in the Syrian city of Afrin.

The senior Turkish official also declared that the Turkish-backed Free Syrian Army started a military advance in the territory of the Kurdish-populated Syrian city of Afrin.

"From this moment, the heroic Turkish Armed Forces have launched an air operation to destroy the PYD/PKK and Daesh elements in Afrin," Yildirim announced.

The start of the advance has been confirmed by the country's Armed Forces, which declared that operation"Olive Branch" was launched at 05:00 p.m. local time (02:00 p.m. GMT).

© AFP 2021 / BULENT KILIC
Smoke billows on the Syrian side of the border at Hassa near Hatay, southern Turkey on January 20, 2018 as Turkish jet fighters hit the People's Protection Units (YPG) positions

The Turkish Foreign Ministry has stated that Ankara notified Damascus and the United Nations about the progress of the military offensive in Afrin in writing.

"We are notifying the Syrian regime, as well as all other sides, including the United Nations, about the operation in written form," Cavusoglu said, as quoted by the NTV broadcaster.

As the Foreign Minister specified, the country would continue informing Russia and other states about the progress of the operation, adding that he had spoken with the US Secretary of State Rex Tillerson about the issue.

"We expect that the true partners will be with us, not with terrorists. We have informed Tillerson about it in the conversation earlier in the day," Cavusoglu said while aired by the NTV broadcaster.

The confirmation follows the earlier reports, telling about the conversation, citing a diplomatic source, and adding that the talks were held upon the request of the US side.

Soon after the launch of the offensive, as a diplomatic source told Sputnik, Russian and Iranian ambassadors to Turkey as well as the US charge d'affaires had been summoned to the Turkish Foreign Ministry to be informed about the start of the operation.

"Targets are being hit from air and from the ground. We are doing everything while talking to our partners. Regarding the reaction in the region, Syria will obviously be against. Russia has already made statements. We are informing Russia and other interested states about all our steps and will continue informing them. We have warned about our concerns, our goals are clear. The strikes targeting only terrorists," Cavusoglu said while aired by the NTV broadcaster.

This information has been confirmed by the spokeswoman of the Russian embassy in Turkey.

According to the Turkish Hurriyet newspaper, the country's F-16 jets have conducted strikes on six targets in Afrin, adding that the Turkish Armed Forces have simultaneously launched artillery shelling from the Kilis province, bordering Syria.

The news comes after Turkish President Recep Tayyip Erdogan officially confirmed the de facto start of the operation in Syria's Afrin earlier in the day, adding that the operation would be followed by Manbij, another Kurdish-controlled Syrian town.

The operation does not come as a surprise: Turkey has been threatening to launch the offensive in Afrin since last week, following the US announcement of its decision to start training a border protection force comprising the US-backed Syrian Democratic Forces (SDF), affiliated with the Kurdish People's Protection Units (YPG), which Turkey considers to be a terrorist group.

Reacting to the Turkey's announcement, US State Department spokesperson Heather Nauert urged the country not to engage in any invasion of Syria's Afrin, echoing a statement made by US Secretary of State Rex Tillerson, who also assured that the US had no intention to build a Syria-Turkey border force, saying the issue, which has incensed Ankara, had been "misportrayed."