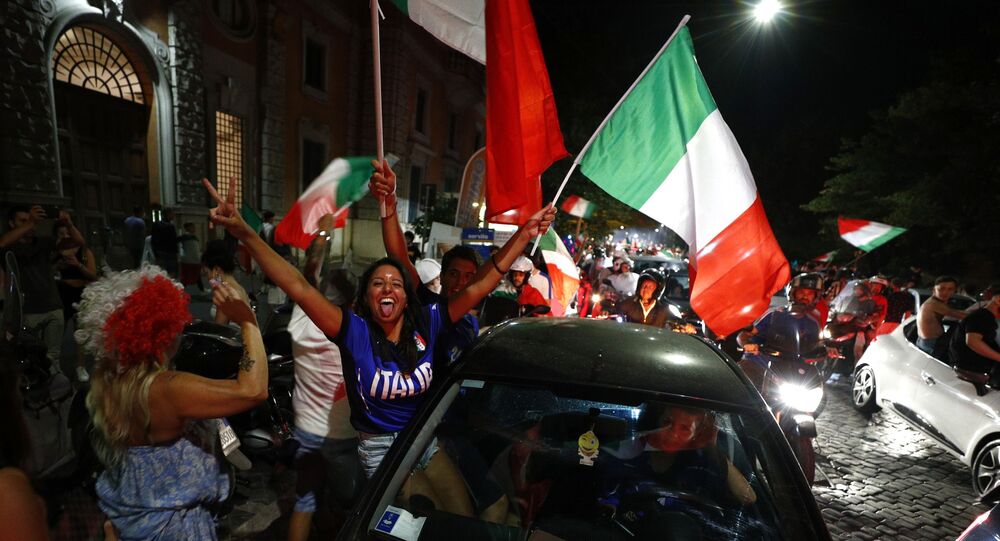 The Italian national team made history on Sunday night with a narrow win against England 3:2 on penalties. As the match ended, Italian fans across the world went into a celebratory frenzy.

Rita Ora’s nude body slightly covered in an England shirt didn’t help the English team prevail in the Euro 2020 final despite an opening goal from Luke Shaw just two minutes into the game. Italy’s Leonardo Bonucci response and a successful series of penalties left England devastated: the championship came to Rome, not home as the Three Lions expected.

Italy’s fans soon took to the streets to celebrate their second European trophy - the team last won the Euro championship in 1968. Fireworks, flags and naked boobs were seen flying around (well, not literally of course) as fans took the festivities to the next level.

FIREWORKS FOR EVERYONE I LOVE YOU ALL pic.twitter.com/UKNUFvXvB7

Azzurri’s win was cheered not only in Italy, as fans of the team went wild in the United States, Canada, Scotland and other parts of the world that have a big Italian diaspora.

It goes without saying the mood was rather different in London.

English fans broke codes of civilized behaviour already prior to the game as many of them attempted to break into Wembley stadium without tickets, while clashing with stewards and other football spectators.

As the match ended, the Three Lions’ loss was met by fans with agonizing frustration as English hooligans went into a punch-throwing spree. Clips circulating on social media suggest that the biggest blow from them fell upon the shoulders of happy Italian fans, but it’s difficult to say with certainty who were the main victims of the madness that occurred on English streets.

It was face of Prince William’s son Prince George, who first happily cried over England’s first goal alongside mother and dad at Wembley, that summarised it all pretty well at the end of the match.

Loved Prince George’s reaction to the goal, with hugs for mum and joy with dad, it melted my heart a little and to seePrince William lost in a moment and be like the rest of the nation #england maybe next time pic.twitter.com/hPY1wy7AhM

Starting a fundraiser for this wee lad, crying after the England loss, don’t know who it is but we’ll do the right thing xx pic.twitter.com/VjQlXvwxie