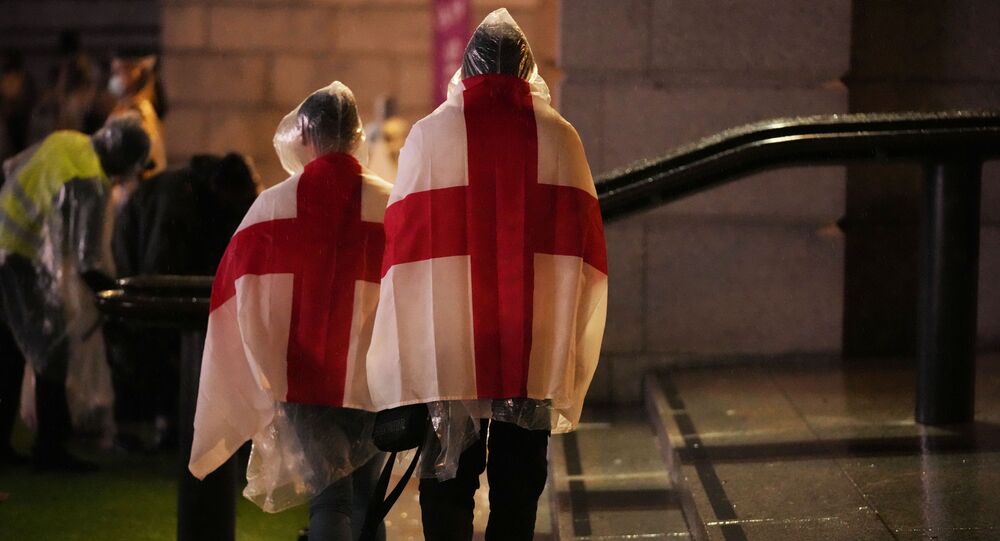 According to the projections, the Three Lions were bound to prevail over the Italian national team, with England's fans being sure of their certain victory. However, social media posts seem to indicate that outside England, fans mostly were in favor of the Azzurri.

It is the second European title for the Italian Azzuri. The first time the Italian national team won the continental title was in 1968.

Photos and footage taken by Sputnik correspondents show English fans down in the dumps as they roam London's streets, full of empty bottles and garbage left by the most aggressive supporters of the Three Lions prior to the Sunday clash. These pictures dramatically contradict with earlier videos of English fans, where they smashed Wembley's gates to get to the pitch for free, booed Italian players and even beat other fans, scaring other spectators.

Following the results, Italian goalkeeper Gianluigi Donnarumma, who saved two attempts in the penalty shootout, was declared Player of the Tournament at the 2020 UEFA European Football Championship.

In the first minutes after the final penalty, the English fans were outraged, then they began to hug and console each other. Soon, however, their sorrow was replaced by anger as the fans burnt firecrackers and overturned trash cans, a Sputnik correspondent reported.

Others were not able to go home as at least three stations in central London, Piccadilly Circus, Leicester Square and Covent Garden were closed.

What's ironic about today's match is that England fans were almost 100 percent sure their team would beat Italy, with the most devoted ones even getting tattoes that read 'England Euro 2020 winners' days before the anticipated match was held.

English fans: boo at every opponent and their athems, blend keeper with a laser, destroy London

There have been no serious disturbances in the center of London so far, the police are out on duty in the streets.