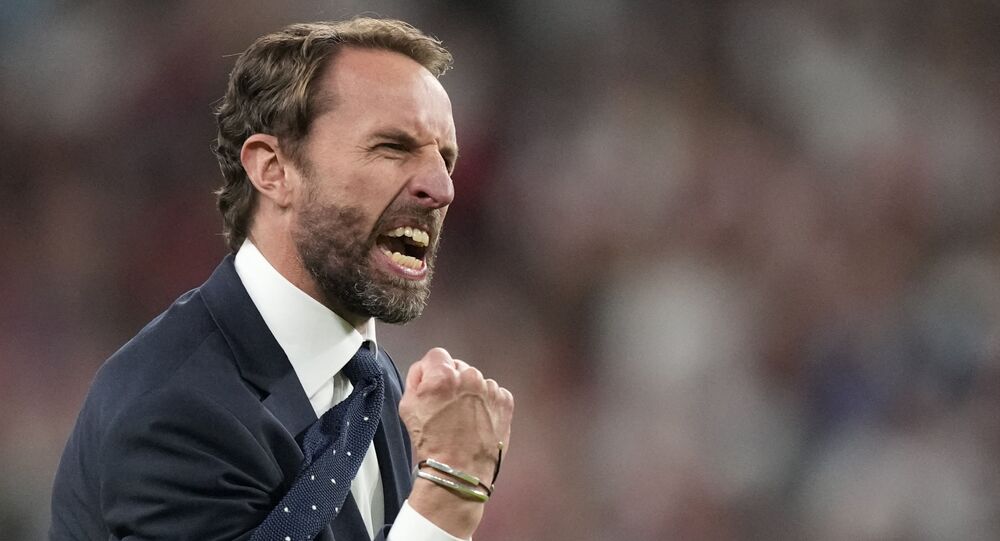 England and Italy are set to face off in the final of Euro 2020 at Wembley Stadium on 11 July at 8 p.m. (1900 GMT). After Wednesday's semi-final win over Denmark, this will be England's first-ever appearance in a Euro final and their first in the final of a major tournament since claiming the 1966 World Cup.

Ahead of England’s Euro 2020 final against Italy, manager Gareth Southgate has channelled the island nation’s wartime spirit, urging supporters to be proud of the UK’s achievements off and on the pitch, in an interview for The Telegraph.

Southgate advised fans that it was time to stop "looking at the negatives of our own country", adding that England had a habit of underestimating itself.

"We have got so much to be proud of… For an island our size, we've got an incredible influence on the world and we've got to keep that in a positive way."

The manager of the England national football team, whose grandfather served in the Royal Marines during the Second World War, believed that memories of WWII and the “Blitz spirit” had played a part in the Three Lions’ 2-0 defeat of Germany at Wembley earlier in the tournament, to book their place in the quarter-finals.

Team England are nicknamed Three Lions because of the badge on the shirts worn by the players, in a nod to the Football Association’s logo.

"People have tried to invade us and we've had the courage to hold that back. You can't hide that energy in the stadium against Germany was because of that. I never mentioned that to the players, but I know that's part of what the story was," said the former midfielder.

Southgate also stressed that his team symbolised the "values" of what it was to be English, such as tolerance, inclusion, decency and respect.

"I think these are historic things that we can be proud of. It's a wonderful privilege to be able to make a difference," he told the outlet.

Touching upon the issues of tolerance and team England’s “taking the knee” to show their anti-racist stance in support of “Black lives Matter”, Southgate acknowledged he had encouraged his players to do so.

"That inclusivity is really important for us because I think that is what modern England is," said the manager, who at the UEFA Euro 2020 has become the first England manager to reach the finals of a European Championship or any major tournament final since 1966, when the country’s team won the FIFA World Cup.

Gareth Southgate had kudos for players like Manchester United forward Marcus Rashford, who was awarded an MBE for his work tackling child poverty in the pandemic.

Hailing them as "exceptional examples of players setting a really good example for young kids", he said:

"It's important that their parents, when they are talking to those kids, can say: 'We are quite happy for you to be a Raheem [Sterling], a Marcus [Rashford], a Kalvin Phillips, or whoever they might be because they stand for the right things off the pitch as well as on it'."

The England squad will have 60,000 fans at Wembley on Sunday supporting them as they face Italy, which is in its 10th major final and has never lost against England at a major tournament.

How Much Will UEFA Pay the Euro 2020 Champions?