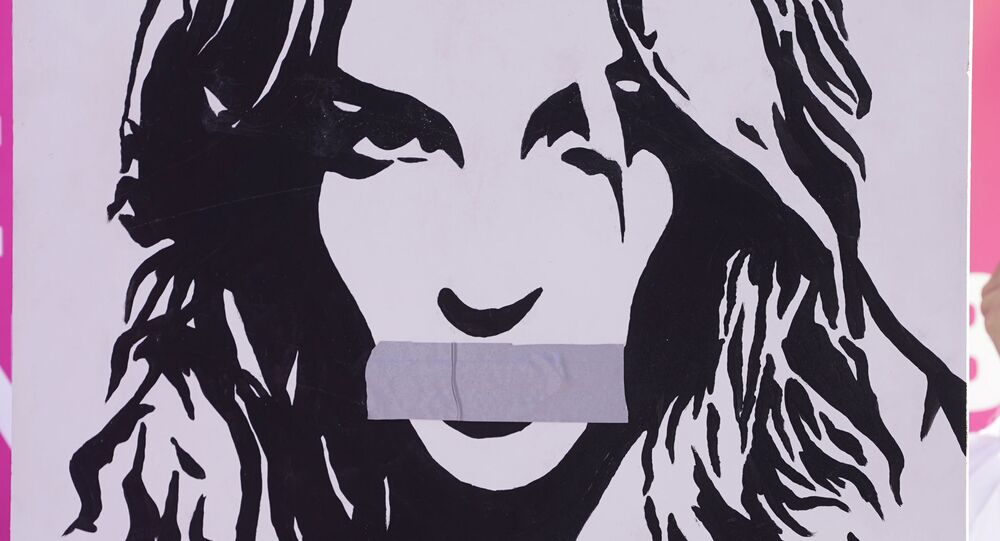 Former teen idol Britney Spears has seen her personal life and finances fall under the control of her father and court-appointed managers for the last 13 years due to a so-called conservatorship that was installed in 2008 due to the star’s troubling emotional state. In June, she asked the court to relieve her from the “abusive” arrangement.

Iconic pop singer Britney Spears has left her fans worrying again after she posted a cheeky message on Instagram telling her “haters” to “kiss her a**” shortly after publishing an edited nude photo.

The first image, posted on 7 July, showed the singer’s bare back with no signs of Britney’s iconic tattoos, which she previously was so eager to boast about – including one on her neck of the Hebrew word for healing. Posing in a bathroom in front of a sink, Spears swept her blonde hair to the side to demonstrate that there was nothing on her neck.

Some fans felt they were blessed with “Britney’s back” photo over spiralling concerns about the controversial conservatorship the musician was still under following her heart-breaking testimony to Los Angeles court on 23 June. Others, however, were quick to point out that the photo didn’t come from Britney herself – or even feature the singer in the first place due to the absence of her high-profile tattoos.

Just a day and another cryptic post later, the singer decided to respond to concerned social media users, saying on Instagram that she “edited out” the tattoo on her neck because she “wanted to see what it would look like clean”.

“… and yeah I like it better so while you guys are talking behind my back go ahead and kiss my a** haters”, she said in a post, alongside kissing and peach emojis.

The caption was attached to a telling image that depicted a woman showing her middle finger that said “while you’re talking behind my back feel free to bend down and kiss my a**”.

But many of Britney’s fans still remained unconvinced that she was the one behind the sassy message:

“This ain’t Britney just so yall know,” one user commented.

“Britney would never,” another added.

Claims that Britney is not the one running her social media accounts have long been in circulation, heated by the viral #FreeBritney movement. A recent investigative report by the New Yorker shared some light on how Britney Spears’ social media accounts are managed by her conservators. The report claimed that the star is still the one who writes her posts before they are submitted to CrowdSurf, the company which handles her social media, while her management team meets every Thursday to discuss and deal with her legal and business affairs, including social media posts.

Spears, it is said, is still deprived of the possibility to discuss her conservatorship on Instagram and Twitter, so there is some censorship behind her social media presence.

Britney Spears has been under the guardianship of her father Jamie and a team of managers since 2008 after she was caught in a mental frenzy that included her attack on paparazzi and refusal to return her kids to their father Kevin Federline.

Speaking to the court on 23 June, Britney said that she wanted to stop the “abusive” conservatorship that was akin to “sex trafficking”.

The ‘Toxic’ singer had a lot to say about her father during the testimony, blaming him for enjoying her emotional struggles, forcing her to work and take medication against her will. Jamie Spears responded by saying that he hadn't been in charge of his daughter’s persona for some time now, that she was supposed to be under guardianship of Jodi Montgomery. He also said that he hated to see his daughter “in so much pain”.

Last week, a Los Angeles judge denied the request to remove Britney Spears’s father as a conservator of her estate, leaving Bessemer Trust Company of California as the sole guardian of her finances. But following the ruling, the private wealth-management company asked the court to “immediately” allow it to resign from Britney’s conservatorship case in light of “changed circumstances”.