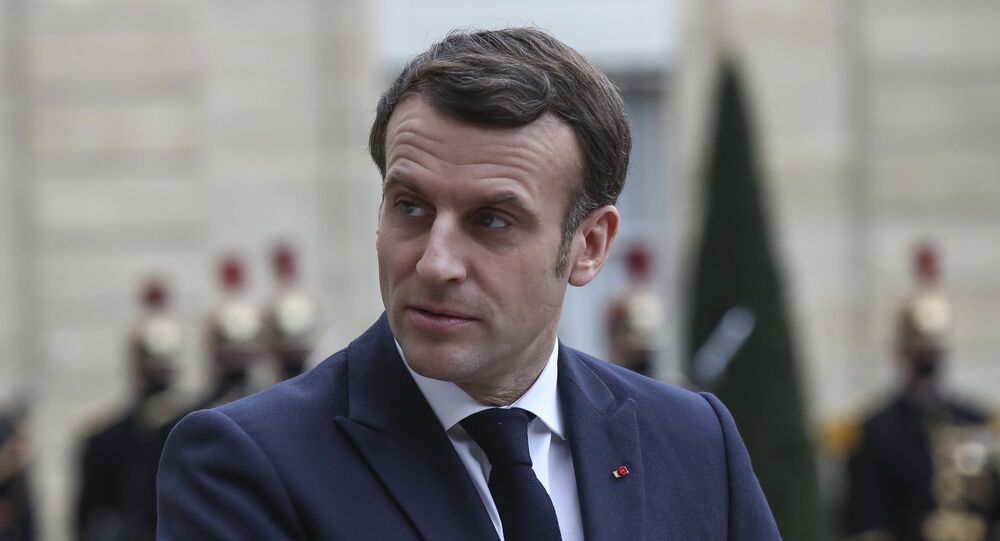 President Emmanuel Macron appeared in an English-language interview on CBS News on 18 April, where he announced a gradual lifting of French travel restrictions for Americans who have received two doses of COVID-19 vaccine, from “the beginning of May”, and touched upon a swathe of topics of global importance, including the climate crisis.

President Emmanuel Macron weighed in on a plethora of global issues as he gave an English-language interview on CBS News on 18 Aprip, however, a particular aspect of the 1.29 minute clip left netizens trolling the French head of state on social media.

NEW: French President Emmanuel Macron says France will "progressively lift" travel restrictions at the beginning of May, including for American citizens who are vaccinated. Macron says initial plans have been discussed with the White House. pic.twitter.com/nuDzdUstvP

​As Macron welcomed the US back into the Paris climate accords on Sunday, saying President Biden was "100% right" to rejoin the agreement and opt for further cuts in greenhouse gas emissions, in an interview with "Face the Nation" that aired Sunday, his English differed vastly from the usually flawless accent the former investment banker wielded.

While hailing Biden's moves after the 46th POTUS signed an executive order on his first day in office in January rejoining the 2015 accord, which set targets for countries to reduce greenhouse gas emissions, Macron acknowledged that many of the 184 countries that have signed the agreement haven't met their own goals for reducing emissions.

​"As Europeans, we increased our targets for 2030 and 2050 a few months ago because indeed we were lagging behind in comparison with our targets. And now we have to accelerate because we are living the first consequences of basically climate disorders," said Macron.

However, as he underscored the importance of having “India and China to be with us" in the clip, the French official seemed to have ‘upped’ his ‘Frenchness’, by lapsing into a deliberately heavy accent.

As Macron moved on to other global issues, announcing a gradual lifting of French travel restrictions for Americans who have received two doses of the COVID-19 vaccine, from “the beginning of May”, and saying that France’s vaccination programme was “catching up” with other countries, the Twitterverse tore into what was branded his ‘Frenglish’.

yeah it has worsened a bit indeed. But no comparison with Renzi please😂😭💔

I think it is the social isolation/pandemic effect. I also feel it lately with Rutte's accent in English.

​Many believed it was a deliberate ‘stunt’ seeking to solicit more support ahead of the upcoming elections, set for 8-23 April 2022.

Could be a genius pre-election gambit. Ratchet up the Frenchness to boost support in the heartland

but he doesn't even sound like a normal french person speaking english, he almost sounds german or something

(this is not a real accent)

I have a long-time held theory about this. When I first met him at a @CER_EU event in London in his days as a minister, his English was flawless. He then became President and already showed his Frenglish in his call to Obama. At first I thought: nerves. Now I think strategy.

He's hamming it up for sure. Maybe he lost a bet?

Emmanuel Macron Under Fire for Spending Over $700,000 for Flowers at Elysee Palace