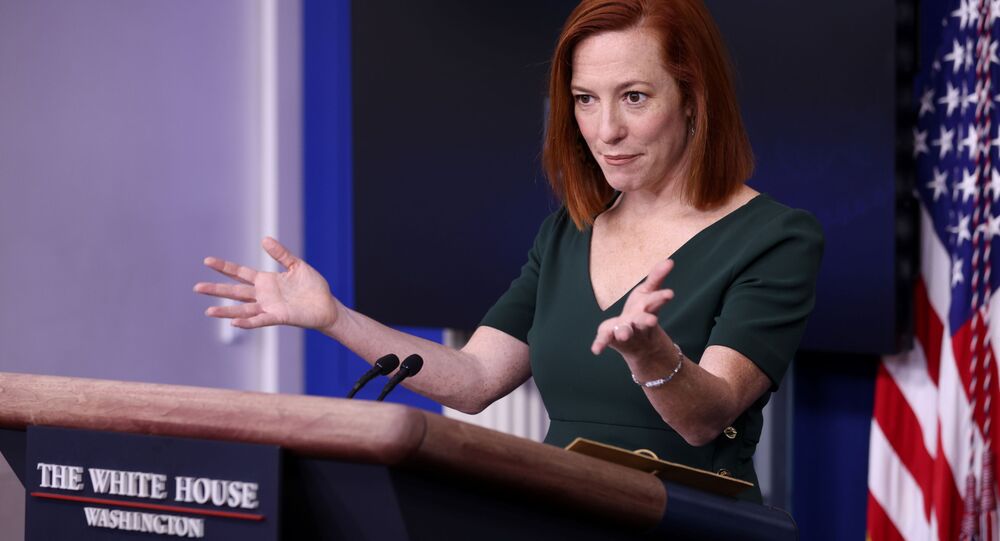 Earlier in the day, the Pentagon confirmed that the United States had carried out airstrikes targeting "Iranian-backed" militia assets on Syrian territory, on the order of President Joe Biden, asserting that the purpose of the strikes was to "de-escalate" the situation in Eastern Syria and Iraq.

After the Pentagon's confirmation of US airstrikes in Syria targeting what was claimed to be "Iranian-backed militia", some netizens appeared to feel nostalgic, looking back at what the White House press secretary, Jen Psaki, used to think about airstrikes on the territory of "sovereign countries".

In a tweet from April 2017, in which the Psaki wondered about the "legal authority for strikes" in Syria, she noted that the country is "sovereign". The old tweet has obtained a new life and gone viral.

Netizens pointed out that the current White House press secretary had questioned airstrikes in Syria ordered by the then-US-president, Donald Trump. At the time, the airstrike were said to have been carried out in response to a chemical weapons attack in Khan Shaykhun, which, the White House claimed, was conducted by the Syrian government.

Also what is the legal authority for strikes? Assad is a brutal dictator. But Syria is a sovereign country.

​Now, when an US airstrike was ordered by President Biden in response to several rocket attacks on US assets in Iraq, this tweet "didn't age well", as netizens noted.

@PressSec, what is the legal authority for these strikes?

​The useful "circle back" catch phrase was immediately turned into a local meme.

@PressSec Will you answer your own question, Jen, or will you have to circle back with yourself? https://t.co/lnO7hYcMYw

Your boss just bombed Syria. Care to circle back on that? https://t.co/b6Sx6JEWZb

​This was not the only meme, however.

how it started how it’s going pic.twitter.com/4wly2goVFf

​Back at the time when Psaki was apparently more questioning of US airstrikes in sovereign countries, she denounced the former president for acting "without consulting Congress" and "without clear legal authority".

"Taking targeted military action this evening is a step that probably felt powerful to Trump. It shows action. It shows force. It shows military strength", Psaki wrote in an op-ed for CNN in 2017. "The problem remains: What is next?"

The Biden airstrike, according to a Thursday statement by the Pentagon, targeted "Iranian-backed militia" and aimed "to de-escalate the overall situation in both eastern Syria and Iraq". The US DoD touted the move as a "proportionate military response" to rocket attacks in Iraq, that was conducted "together with diplomatic measures, including consultation with Coalition partners".

The Pentagon statement did not mention consultations with the US Congress on carrying out airstrikes. Claims subsequently emerged in social media suggesting that US Vice President Kamala Harris - who was also "deeply concerned about the legal rationale" of US strikes in Syria in 2018 - was not informed about the Thursday attack.