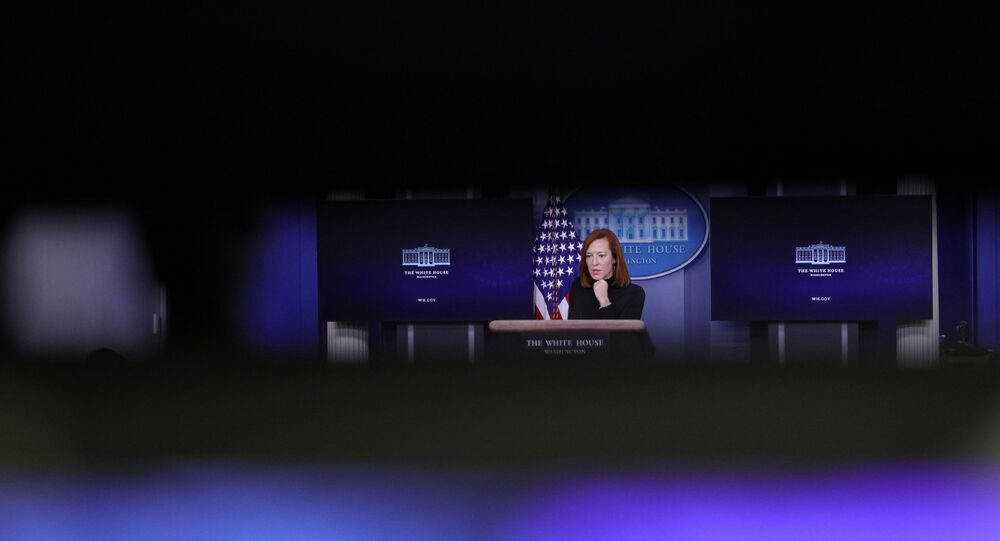 WH Under Fire as Press Aide Suspended, Not Sacked After Demeaning Politico Reporter

Earlier in January, US President Joe Biden pledged to fire any staffer if they "treat another colleague with disrespect, talk down to someone", adding that there would be "no ifs, ands, or buts".

On Friday, White House Press Secretary Jen Psaki tweeted that one of her deputies, TJ Ducklo, had been suspended for a week after he reportedly threatened and humiliated Politico reporter Tara Palmeri because she was pursuing a story about his relationship with Axios reporter Alexi McCammond.

According to the reports, Ducklo stated that he would "destroy" Palmeri, while also claiming that she was "jealous" because an unidentified male in the past sought to "f***" McCammond, not her.

Psaki said that Ducklo sent an apology to Palmeri for a "heated conversation", and expressed his "profound regret."

"He is the first to acknowledge this is not the standard of behavior set out by the President", Psaki tweeted, noting that her aide had been suspended without pay and will no longer work with Politico reporters.

With the approval of the White House Chief of Staff, he has been placed on a one-week suspension without pay. In addition, when he returns, he will no longer be assigned to work with any reporters at Politico.

​The move, however, drew frustration from some netizens, who said they expected the Biden administration to stick to its "higher standard", referring to a statement the president made in January.

“I am not joking when I say this: If you are ever working with me and I hear you treat another colleague with disrespect, talk down to someone, I promise you I will fire you on the spot. No ifs, ands, or buts,” Biden said when he was swearing in his new appointees.

With respect, unless there's some missing factor at play here, @PressSec (and perhaps there is) that's not great. President Biden made his statement pretty unequivocal.

Jen, he should be fired according to the president's own words. Don't make exceptions. Please hold yourself to a higher standard.

This is, of course, not what Biden promised just three weeks ago.

He said specifically at that time he would fire "on the spot" anyone who treats "another colleague with disrespect" or talks "down to someone -- no ifs, and or buts." https://t.co/GBSoeMg9Io

Well it's a good thing his boss did not boldly declare three weeks ago that anyone in the administration who disrespects or talks down to others would be fired on the spot https://t.co/TdDuCD7Yik

​Some argued that Biden's "no ifs, ands or buts" statement has not been technically violated, as Palmer was not Ducklo's colleague in terms of the work at the White House.

I assumed he was referring to fellow WH staffers, in terms of their workplace environment. I don't think reporters are "colleagues" of WH employees.

​Others, referring to Ducklo's health condition - he has 4 stage cancer - said that it could be problematic to instantly fire him.

I think firing someone immediately who has stage 4 cancer is an issue because insurance gap. I suspect Ducklo will resign as soon as he secures other employment- with health insurance.

He has stage IV cancer. At least let him find a job with insurance. Or, you know, pass M4A so he can continue his treatments. Firing him is a death sentence. He'll be gone soon.

Some users recalled the previous administration and compared it to the current one.

Would you prefer the Republican model of “it’s time to Move On” be followed? There was no real accountability the past 4 years in the Republican controlled White House. People make mistakes, they say things, OWNING it as opposed to ignoring it is key.

​​Relations between Ducklo and McCammond have been strained before, and described, according to reports, as Washington's "worst-kept secret", raising eyebrows due to a conflict of interest, as McCammond, who covered Biden's campaign, was reassigned by Axios to write about "progressive lawmakers" in Congress and Vice President Kamala Harris.

'Funny Dems Don't Know What Truth Is': Jen Psaki Trolled for Vowing to Bring 'Transparency' Back