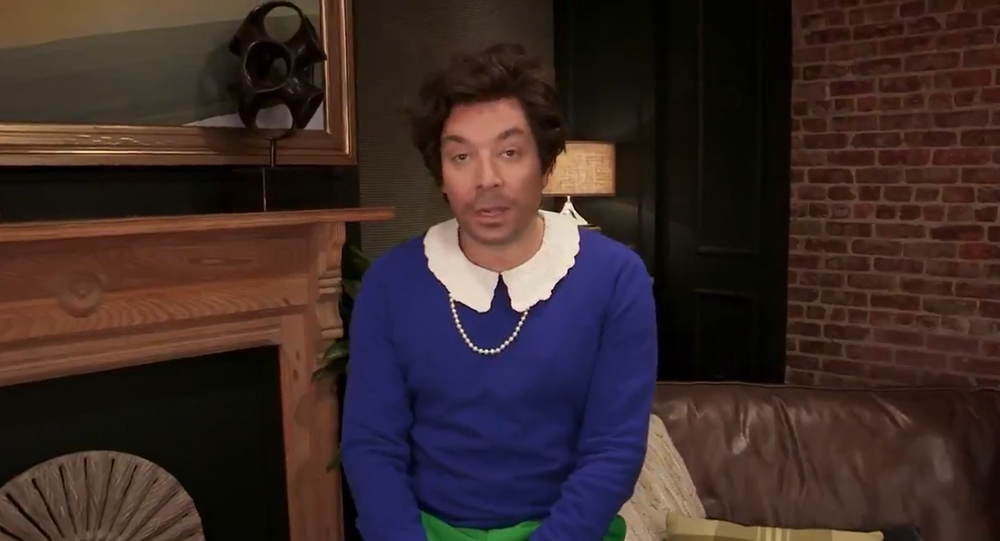 Appearing in Vogue in a set of Gucci dresses, British singer Harry Styles has made history as the first male star to grace the cover of the iconic fashion magazine. While some saw the move as a triumph of the progressive idea, others slammed both the singer and the magazine for what is described as the "feminization" of men.

Tonight Show host Jimmy Fallon stepped forward to impersonate singer Harry Styles in the iconic Vogue format "73 Questions" shortly after the British star appeared on the magazine's cover to deliver some Gucci looks and spark hot debate about the move.

Fallon, recreating one of Styles' looks with a royal blue jumper with a fancy collar and a pearl necklace, answered some questions in a manner that social media users found strikingly similar to that of the singer.

Asked about how his day was going, the American TV host initiated an absurd story about his persona stepping "in a rain puddle and accidentally got a ladybug wet", then said that the last person he called was his "Uber driver" who he called "just to say hello".

The interviewer then questioned about the best gift that "Harry Styles" has ever received. Fallon did not hesitate.

​Netizens, at first confused at the notification of Harry Styles taking part in the famous Vogue Q&A, soon realised it was not what they were expecting. Fallon, however, received applause for the Styles impersonation.

what you order what you get pic.twitter.com/yiMeI1Q3xM

THE FACT THAT HARRY WOULD ACTUALLY SAY SOME OF THESE ANSWERS I- HELP pic.twitter.com/sn34GLFKtm

​Fallon fool some fans for a minute.

Okay I hate to admit this, but from a glance, this still could have fooled me pic.twitter.com/a4BQ7QT03K

I DON'T CARE ABOUT WHAT OTHER PEOPLE SAY, ITS PERFECT. @jimmyfallon @FallonTonight YOU DID WELL. pic.twitter.com/v1pXwzuvol

​The Tonight Show account responded to some users with a pun, referring to one of Styles' songs.

Glad you're "Falling" for it 😆

​Styles appeared on a recent Vogue cover, wearing Gucci dresses, in a performance that made him the first male model to be featured on the cover of the world's preeminent fashion magazine. The move divided users online, however, with some praising the singer for an audacious move and others slamming both Vogue and Styles for what they were inspired to characterize as the "feminization" of men.

Candace Owens, a right-wing conservative commentator, tweeted that she wanted to "bring back manly men".

"There is no society that can survive without strong men. The East knows this. In the west, the steady feminization of our men at the same time that Marxism is being taught to our children is not a coincidence. It is an outright attack. Bring back manly men", she complained.

Apart from many supportive tweets, Owens received a lot of criticism from regular users and celebrities, particularly actor Elijah Wood, who pointed out that "masculinity alone does not make a man".

Harry Styles is well known for his daring and fashionable outfits, prior to appearing on the Vogue cover. After the One Direction band went on hiatus, Styles began a solo career, releasing two successful albums: "Harry Styles" and "Fine Line".