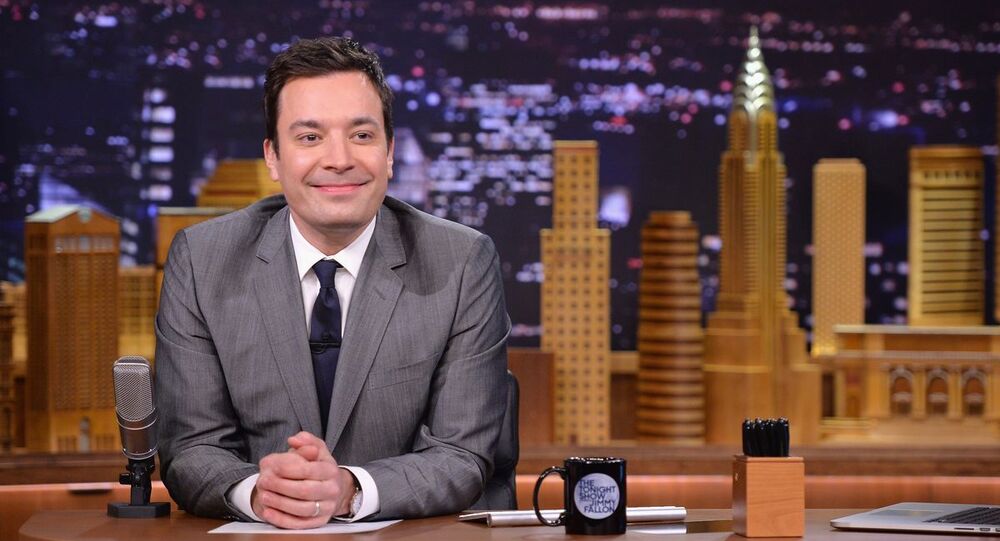 Fallon came under pressure after a picture of him portraying comedian Chris Rock with a darkened face was spread on social media, with the hashtag #JimmyFallonIsOverParty attached.

Tonight Show host Jimmy Fallon has apologised for wearing blackface in an episode of "Saturday Night Live" 20 years ago, saying that "there is no excuse for this".

In 2000, while on SNL, I made a terrible decision to do an impersonation of Chris Rock while in blackface. There is no excuse for this.

I am very sorry for making this unquestionably offensive decision and thank all of you for holding me accountable.

His apology triggered even more discussion, with users saying it was not his fault but that of SNL for letting him appear on TV with a darkened face, while other users suggested there is no reason to discuss something that happened years ago when there are plenty of real problems that need addressing.

It’s sad that a comedian that has done nothing but give back to his community has to apologize for a skit that was written by someone else 20 years ago.

As a black woman, damn. 20 years ago and this is what people want to discuss? A man was just suffocated by the police. A woman made a false 911 call about another man. An orange buffoon squats in the WH. Let’s get our priorities together. This is a non-issue.

​"I guess nobody understands jokes anymore. Comedians do blackface, whiteface, nativeamericanface, they impersonate french accents, german accents, chinese accents, etc....it's just comedy", one user tweeted. "The snowflakes in this world will request anyone to be canceled for any reason."

Others said it was just a sketch in which Fallon was impersonating Rock and had no intention to offend anybody, blaming the so-called "cancel culture" for attacks against him on Twitter.

"It was a comedy skit Twenty Years ago. Get a life", one user tweeted.

Your weren't in blackface. You wore makeup to portray a character. You were making fun of Chris Rock, not of him being black. It's a shame people don't understand the difference. What's worse is if you tried to explain it like I did, They'd come after you harder.

However, a lot of netizens remained unsatisfied, with some openly calling Fallon a racist and even recalling his other "failures" on SNL. Some even claimed white people have no right to speak out on this issue and accept Fallon's apology.

"If you're white you are not allowed to forgive/dismiss this, it's not up to you, you're opinion on the matter is irrelevant. it's up to individuals in the black community to decide personally whether they forgive the offense or not because THEY were racially discriminated against", a user wrote.

She went on to say that the fact Chris Rock himself said he was okay with the skit doesn't matter since he "doesn't speak for the entire black community".

Remember when Jimmy Fallon let his guests body-shame Taylor Swift on his show last year and he too joined in on the laughing and did the same?

He’s is a racist and is finally being cancelled for doing a blackface.
Tayvoodoo came for him omg #JimmyFallonIsOverParty pic.twitter.com/TEMU3gMQ6U

There have been some users that have pointed out the distinction made when an opinion is voiced by a politically right or a left-leaning person, referring to those who consider Fallon's apology to be insufficient, or, instead, accepted it due to his adherence to a leftwing agenda.

"Liberals say ‘sorry’ and the world moves on. A conservative says ‘sorry’ and liberals show up with pitchforks and torches", a user replied.

Don’t worry, you hate Trump so the msm will give you a pass.

Backlash over the 2000 SNL episode resembled the scandal in September 2019, when images of Canadian Prime Minister Justin Trudeau wearing blackface and brownface many years ago were revealed to the public. Despite the controversy, Trudeau, who has been a strong advocate of political correctness, managed to win the parliamentary election, keeping him in power for another four-year term.