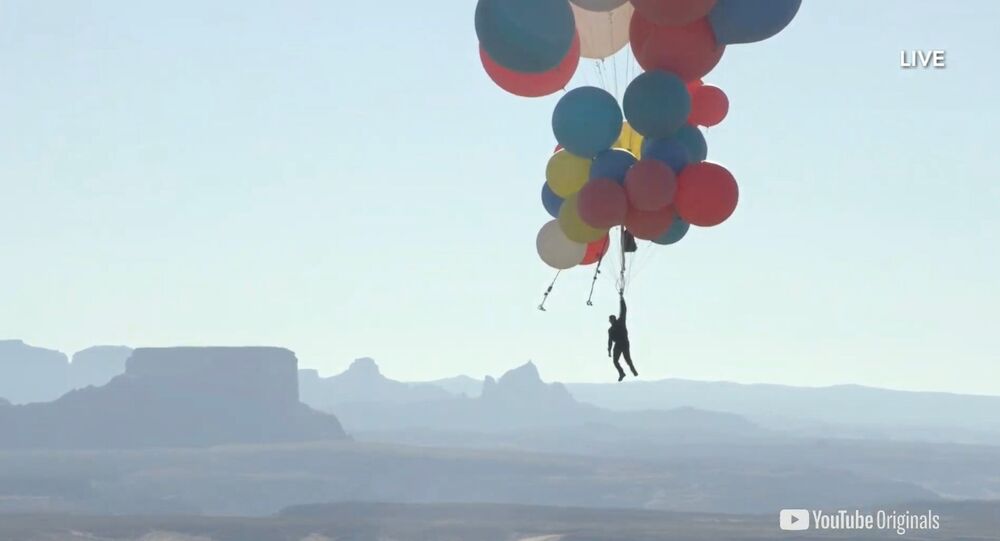 In his latest death-defying stunt, magician and performer David Blaine floated 24,000 feet into the Arizona sky. David Blaine live-streamed his 30-minute stunt on YouTube on Wednesday. The almost three-hour long video shows Blaine preparing for the ascension along with his crew.

The illusionist was accompanied by his daughter Dessa when he drifted off holding on to a cluster of 52 jumbo-sized helium balloons. After reaching certain levels of altitude, he began dropping weights and various parts of his balloons contraption to be able to rise.

He pulled down his parachute and attached it to his body mid-air, and strapped on an oxygen mask. He took some time to prepare for the landing. It's an edge-of-your-seat moment when he releases the balloons at 24,000 feet (7.3 km) and skydives on land.

Among the hilarious reactions from netizens has been the comparison of the stunt with tje 2009 Disney animated movie Up, wherein an elderly man ties thousands of balloons to his house, which floats into the sky.

He took UP too seriously

Is it a plane?
Is it a bird?
No, it’s David Blaine! #DavidBlaineAscension pic.twitter.com/H04agMkw2e

Blaine is famous for his live stunts such as Frozen in Time and Upside Down Man in Trump Tower. In 1999, for seven days he was entombed in an underground plastic box, which was underneath a three-tonne water-filled tank. In his last stunt in 2012, Blaine stood on top of a six-metre pillar for 72 hours, which was surrounded by Tesla coils that produced an electric discharge of one million volts.