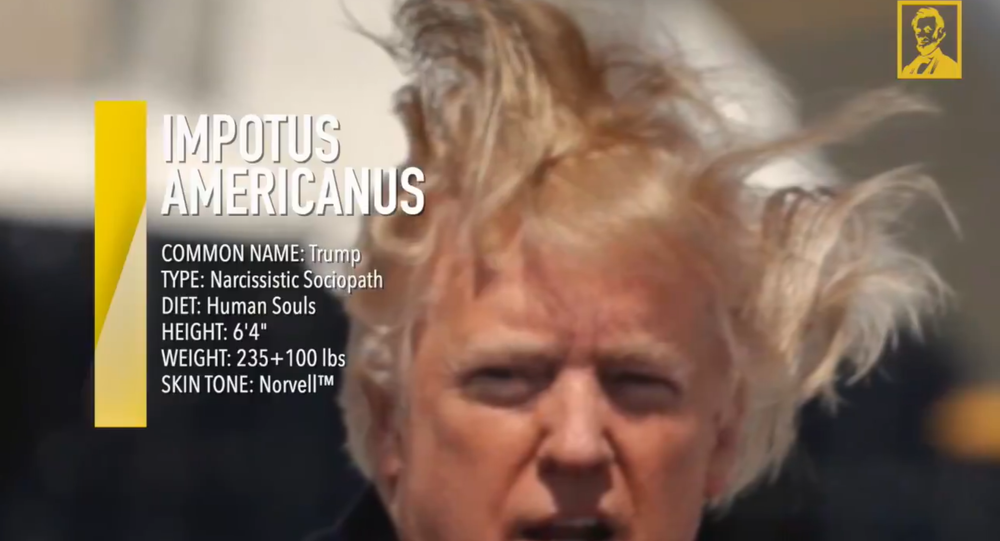 The Lincoln Project is a political action committee created by current and former Republicans in 2019 to prevent US President Donald Trump from being reelected in November and defeat his supporters in the Senate.

Falling in line with a series of disses against US President Donald Trump, a political action committee, The Lincoln Project, rolled out an animal-program-like video in which they characterized the president as "Impotus Americanus".

In a video titled "Nationalist Geographic", The Lincoln Project describes Trump as one of the "heaviest leaders in the animal kingdom", mocking him as being an "orange, ruddy color not found in nature".

"Though Impotus was once considered an alpha-predator, this elderly specimen now weighs over 300 pounds due to its diet of fast food", according to the video narration.

Trump is not the only person ridiculed in the video, as the narrator notes that "Impotus" would formerly "pursue females with other predators like Molestus Epstein", referring to the now-deceased paedophile Jeffrey Epstein, a known associate of the president prior to his death in jail while awaiting trial for the sexual abuse of girls.

By the end of the video, Trump is labeled as a "Master of Deception" and the "Most Corrupt of its species", with the narrator observing that the president is "considered endangered this November due to its own incompetence and failure".

Impotus Americanus is one of the heaviest leaders in the animal kingdom, and is famously known to be an orange, ruddy color not found in nature. pic.twitter.com/8ccudG6krq

​The video immediately received feedback, with some users joining the ridicule and further boosting the narrative.

Hands down the best ad EVER!!! I'm going to need to watch it several more times just to catch all the little snippets of shade!! Y'all really outdid yourself on this one! 🤣🤣🤣 I'm crying & pounding on my desk at how sad & true this is but still damn funny! #ImpotusAmericanus

Do not look directly into the eyes of the Impotus, or he will approach and you’ll be forced to run

This bears repeating, NO ONE trolls Trump quite like team Abe. With so many good PSA's it so hard to pick a favorite. This one is definitely in the running for number one!

There will be a cataclysmic comet on November 3rd that will send this creature into extinction for good.

Really NOT a fan of videos that focus on Trump's appearance. This approach is tasteless and petty. Please stick to a focus on his actions and policies.

Not a fan of the fat jokes. Not only is it a low blow, but it is also insulting to a large number of Americans who are in a similar state (can only afford fast food and thus gain weight.) Political ads should probably not insult the people you are trying to sway.

we all hate trump but y'all know it's not right to dump on him for his weight...for the same reason it's wrong to do that with anyone else

I usually love Lincoln Project videos but this one too mean for me. We have so many reasons to be disgusted with him—we don’t need to make fun of his weight, hair, coloring, externalities.

​The Lincoln Project, a Republican political action committee dedicated to preventing Trump's reelection, is notorious for its sarcastic and harsh videos targeting Trump, including those in which POTUS is compared to Benedict Arnold and is accused of treason, or a Soviet-style video, in Russian, praising "Comrade Trump" for his alleged cooperation with Russia.

Trump Denounced as 'America's No.1 Traitor' as #BenedictDonald Trends Worldwide