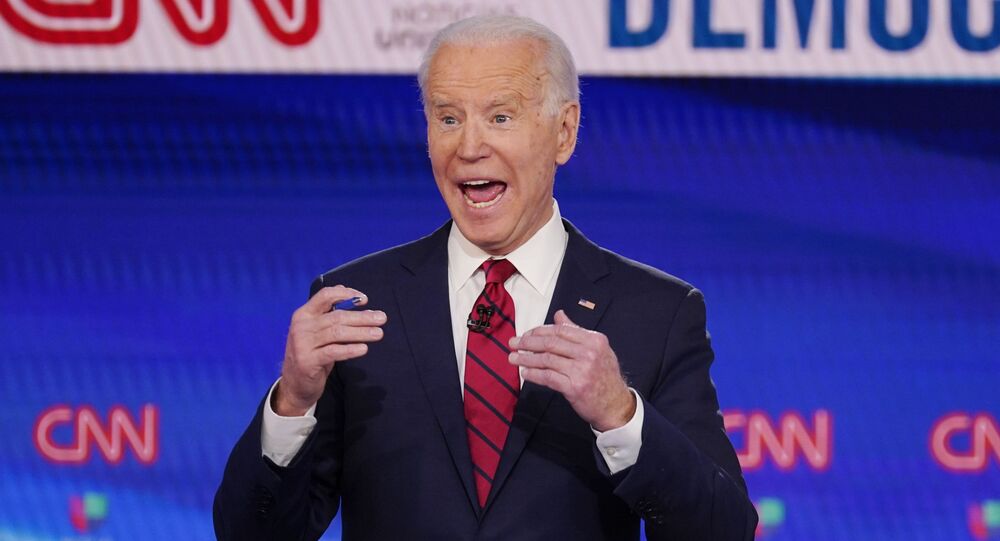 Following his communications chief’s comments, Joe Biden himself has likewise denied any sexual wrongdoing with regard to his accuser Tara Reade, later stressing, though, that as long as someone believes her, that person should in no way vote for him in the November polls.

Voters concerned by the sexual assault allegations of his former Senate staffer Tara Reade should “vote their heart” and if they believe her, they should abstain from ticking off his name on the ballot paper in November, presumptive Democratic candidate Joe Biden suggested on MSNBC.

“I wouldn’t vote for me if I believed Tara Reade”, he asserted.

Asked if he even remembers Reade, Biden dropped unambiguously:

The rhetoric couldn't go unnoticed on Twitter, with users eagerly picking up on Biden's memory "peculiarities".

"Well he can’t even remember four years back asking for unmasking of #Flynn so there is that", one netizen commented with the hashtag "Obamagate", while another butted in cheekily:

"He doesn't remember where he put his slippers either. Maybe people who wear shoes shouldn't vote for him?"

"Dementia or hiding the truth", another issued a verdict.

He also does not remember that he unmasked Flynn. Dementia or hiding the truth.

"Either Joe’s memory has completely gone, or he conveniently forgets important stuff like unmasking and Tara Reade. Either way he shouldn’t ever be POTUS", another came up with two scenarios, with many more playing upon the dementia theory:

How convenient. #Biden can use #dementia as his go-to excuse for his stupidity. He doesn’t remember what he had for breakfast.

Biden can’t even run a bath yet the Dems think he can run the country. Does he even know he’s running for office?

Since he doesn't remember the name of his wife, how do you expect him to remember this!

Is there anything he can remember from day to day? 🤔

Biden, along with his communications director Kate Bedingfield, has strongly denied the sexual assault allegations from Reade, arguing “this never happened”.

Reade made headlines first last year and then this year, claiming that Biden had pressed her against a wall in 1993 and “took her by force” when she worked as his assistant for some time during his lengthy tenure as senator for Delaware.

Earlier this month, he wrote to Secretary of the Senate Julie Adams proposing that she "take or direct whatever steps are necessary" to locate the records of this Office and to "direct a search for the alleged complaint" and make the result of the inquiry public.

However, in a statement seen by The Hill, the office said that the Senate legal counsel advised that the secretary had no discretion to disclose the information request by Joe Biden.

Reade said she had filed a complaint about Biden’s behaviour back in the 1990s, but initially didn’t mention the incident.

A CNN video clip from a 1993 Larry King show surfaced recently featuring an anonymous phone-in from a woman whom Tara Reade claims is her mother. The exchange includes the unnamed caller asking the host where she should direct complaints regarding a "very prominent senator".

Reade, who recently said she is “leaving the Democratic Party” while calling for Biden to drop out of the 2020 race, said she didn't come forward with her accusations against the ex-senator earlier because she wasn’t ready for media spotlight when her daughter was little.

Biden, the presumed Democratic nominee, is expected to take on President Donald Trump, who has also faced a number of accusations, in November when the nation goes to the presidential polls.

Toss a Coin to Your Candidate: Will Trump or Biden Attract the Most Campaign Finance in 2020?