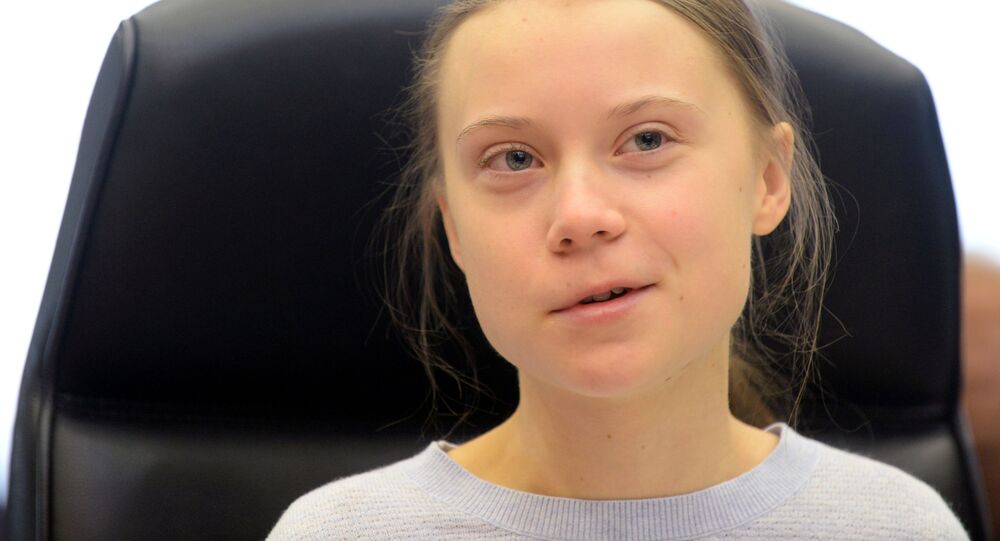 UK Labour Party leader Jeremy Corbyn’s brother has been slammed online for a Twitter post where he shared an image of teen climate activist Greta Thunberg next to a swatstika, against a green and white background instead of the red-and-white used in Nazi Germany.

Piers Richard Corbyn, a 72-year-old weather forecaster and climate change sceptic who owns the forecasting website WeatherAction, shared a string of tweets in a bid to “debunk” the theory of man-made climate change.

In one part of the Twitter posts, Corbyn shared a video of himself arguing with a crowd of people attending the Youth Strike 4 Climate rally last week in Bristol, where Greta Thunberg gave a speech.

In the video he argues vehemently with what he called “GretaGoons”.

Half the crowd stayed & listened. pic.twitter.com/hVGce4dL9A

​The Twitter posts by Piers Corbyn sparked a swift response on social media, as many found his use of the swastika alongside the image of the young activist offensive.

I’m as opposed to the eco loons and the cult of Greta as anyone but it is just plain wrong for you to use a photo of her alongside a swastika. She is a child being used by the cultists. Please delete that tweet.

​Other users were also quite emphatic.

Can you maybe not just casually use a Swastika – and the pain of millions of people – to take a low blow at a teenager? Thanks.

Your suggestion that the very real threat of climate change is comparable to Nazism is as sophistic as it is offensive.

I suggest listening to this interview I conducted of two Holocaust survivors. Then tell me if climate change did what they endured. https://t.co/bEfI84w06M

Could you go so low to relate a swastika with a teenager who is asking politicians to do the right thing. Our teenagers get stabbed every day due to knife crime. You should focus on what really matters.

You know, I'd much rather believe the world's scientists than a self proclaimed 'LongRange WorldLeading weather+climate forecaster' egotist weirdo..

Delete this tweet @Piers_Corbyn It’s grossly offensive and you should be ashamed.

Why are you using the swastika in this way? It shouldn’t be associated with anything else but the horror that was the third reich.

You're a right piece of work displaying a Swastika next to Greta. That young woman has more credibility than you will ever have.

​Other users applauded the weather forecaster’s stance and his view of Greta Thunberg.

I really admire your bravery and energy Piers. Keep up the good work 👏👏👏

What an evil looking face of green fascism.

Piers bud, you’re doing something that necessary and I have the upmost respect for you trying to talk reason to this mindless crowd that have been literally mind controlled by the Greta Inc, Attenborough charlatans run by the international banker criminals. Respect ✊🏻

Stick it to the climate deceivers, they are too brainwashed to listen to real science.

​Tens of thousands of people, many of them children, joined the climate strike headed by climate activist Greta Thunberg in Bristol city centre on 28 February, as the 17-year-old lashed out at governments and media, saying:

“Once again they sweep their mess under the rug for us – young people, their children – to clean up for them. We must continue and we have to be patient. Remember that the changes required will not happen overnight.”

A firm sceptic regarding climate change, weather forecaster Piers Corbyn has frequently stated that the anthropogenic contribution to global warming is minimal, compared with an increase in temperature is due to increased solar activity. In 2008 Corbyn stated that "CO2 has never driven, does not drive and never will drive weather or climate”.

17-year-old climate activist Greta Thunberg, who left school in 2018, driven by a need to raise people’s awareness about the effects of climate change, began by staging lone protests on the streets of Sweden, including in front of the Swedish Parliament.

Her campaign has since grown to encompass millions of people across the world, and she has had the opportunity to express her stance at major summits and conferences, including the United Nations, where she rebuked world leaders for lack of action. The activist was named 2019 Person of the Year by Time magazine.

She has since been nominated for the 2020 Nobel Peace Prize.

‘It Should Be Cancelled’: Netizens React to UK Police Warning About Greta Thunberg’s Climate Protest