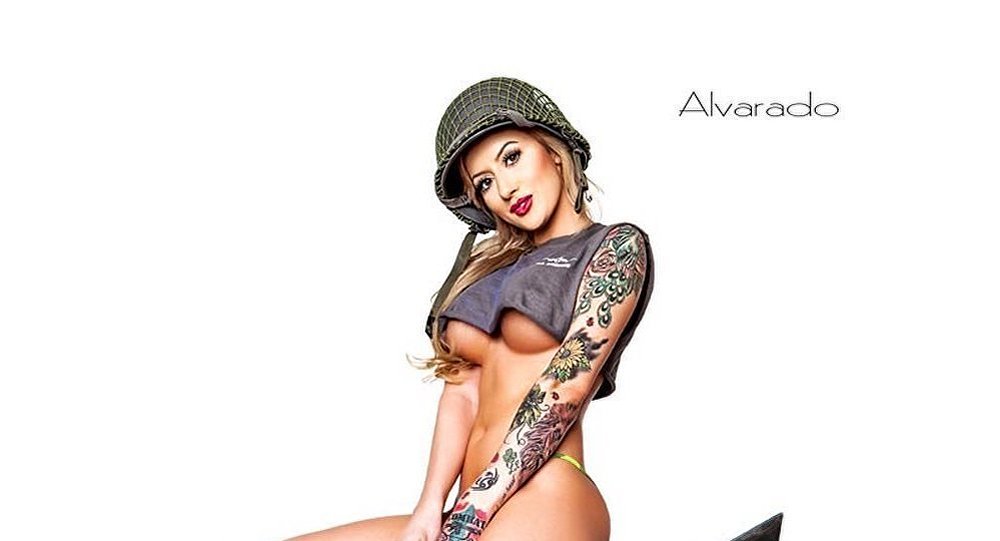 Known as “Combat Barbie”, a former US Marine veteran has drummed up a huge Instagram following for her steamy photo shoots incorporating a military uniform and skimpy lingerie.

“Combat Barbie” does it again: the former US Marine who has built up a huge Instagram following after leaving the military for a career in modelling has stripped down for a super-steamy shoot.

Girls with tattoos who like getting in trouble.. 😈💋 Happy Sexy Saturday from the incredible @in_vogue_photography P.S: I spy a bunny tattoo 🐰

In one photo, the model flaunts her toned figure and shows off her tatted arm and details of her black bondage-inspired outfit.

In another snap, Rianna is seen lying on a leopard print sofa while reading a pin-up magazine.

The former US Marine dubbed “Combat Barbie" has over 570,000 followers on Instagram, showing off her sexy curves in photos that combine a military uniform and skimpy lingerie.

Californian Rianna Connor Carpenter served in the Marine Corps since she was 18, working her way up to the rank of Sergeant, and winning the nickname “The Combat Barbie” from comrades due to her feminine nature, writes the Daily Star.

Once, when asked about why she joined the Marines, she revealed that it was to face her fears, saying:

“I wanted to join the Marines because it honestly scared the cr*p out of me. No one believed that a small girly-girl like me could make it, and neither did I. But I wanted to give it a shot, so that I wouldn’t have to spend the rest of my life wondering, “what if?”

“While in the Marine Corps, I served in a plethora of awesome places such as San Diego, CA and I also served on a deployment in Afghanistan in 2012, for Operation Enduring Freedom. After 2 enlistments of Honourable Service, I am now a proud US Veteran!”

Since leaving the US Marine Corps, Rianna has become a full-time model and internet bombshell, dishing out photos of herself dressed in anything ranging from military fatigues to US flag-emblazoned bikinis.

Most of my best memories come from some old dirt road in Kerman California... 🚜🌾🍇 Anybody else from a farm/ranch? Comment below . Photo by the one & only @in_vogue_photography . Go to www.TheCombatBarbie.com for my 2020 Calendar, posters, stickers, and more! (LINK IN BIO)

Rianna has also since started her own clothing line, “Combat Barbie Clothing”, featuring leggings, shirts, hoodies, joggers and more tailored for both men and women, stating she seeks to combine a mixture of “positivity and patriotism”. Hoping her story can inspire others to achieve their dreams, she says:

“But at the end of the day, my mission as “The Combat Barbie” is to show the world that it is possible to be completely yourself and achieve all of your dreams!”