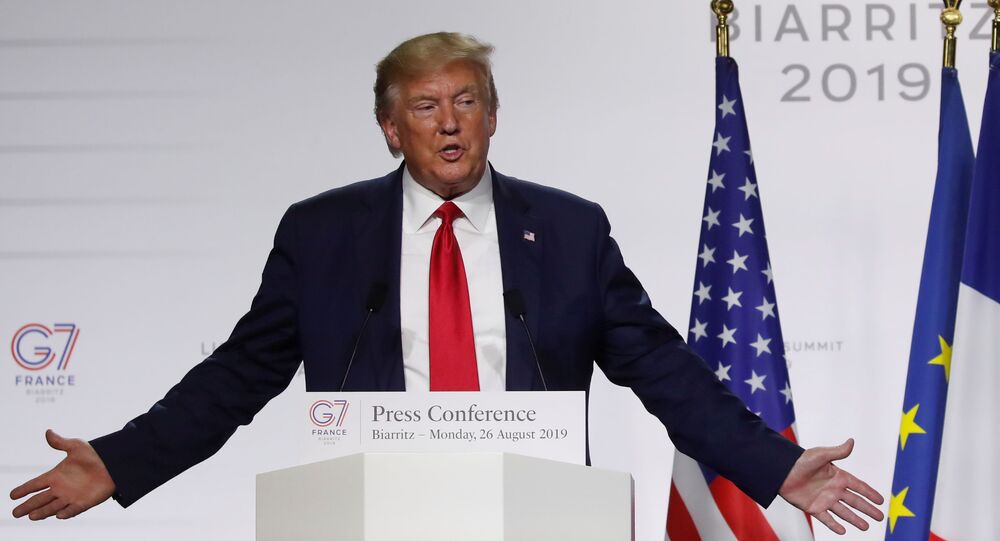 Earlier this week, the Trump administration imposed sanctions on the Iranian Space Agency, Space Research Centre, and Astronautics Research Institute for what Secretary of State Mike Pompeo described as "engaging in proliferation-sensitive activities".

Iran’s Minister of Information and Communications Technology Mohammad-Javad Azari Jahromi has lambasted US President Donald Trump on Twitter, mocking him over “imitating” the space supervillain from the Marvel universe, Thanos.

“I can’t even locate the US in this picture, let alone sanctions on Space! The universe & #BrightFuture belong to everyone, not to a few! Stop imitating #Thanos, Donald Trump!” he tweeted along with a mesmerising photo of outer space.

I can't even locate the US in this picture, let alone sanctions on Space!
The universe & #BrightFuture✨ belong to everyone, not to a few!

​He did not elaborate on why Trump earned the comparison with the so-called Mad Titan, portrayed by Josh Brolin in the Avengers franchise, and who destroyed half the population. The timing suggests, however, that it was sanctions against Iran’s space programme that prompted this reaction.

A Twitter search, however, shows that the Iranian minister was not the first one to have drawn parallels with the cartoonish villain. Some even called on “Tony Stark” to interfere.

Thanos is basically a fictional trump hitler style character but no one said shit but praised him and his actions.

How can no one see the comparison between TRUMP AND THANOS.
HELLO

Trump is looking more and more like Thanos with every passing day. And the Democratic field of contenders are looking like the Avengers. But which one is Tony Stark? #Endgame

​On 3 September, the US Treasury stated that Washington had imposed sanctions on the Iranian Space Agency, Space Research Centre, and Astronautics Research Institute. According to Secretary of State Mike Pompeo, they were retaliated for "engaging in proliferation-sensitive activities". He also stated that this is the first time that the US is sanctioning Iran’s civilian space agency for activities related to advancing the country’s ballistic missile programme.

The move followed the failed launch of an Iranian satellite at the end of August, with a number of media outlets claiming that the failure was the third this year. Iran later stated that a rocket had indeed exploded at its Imam Khomeini Space Centre due to a malfunction during testing, rejecting claims that the incident had been "manipulated" from outside.

US President Donald Trump shared a satellite image of what appeared to be the burnt rocket launch pad and damaged vehicles at the Imam Khomeini Space Centre on Saturday, denying US involvement in the accident and wishing Iranian authorities "good luck in determining what happened" at the site.