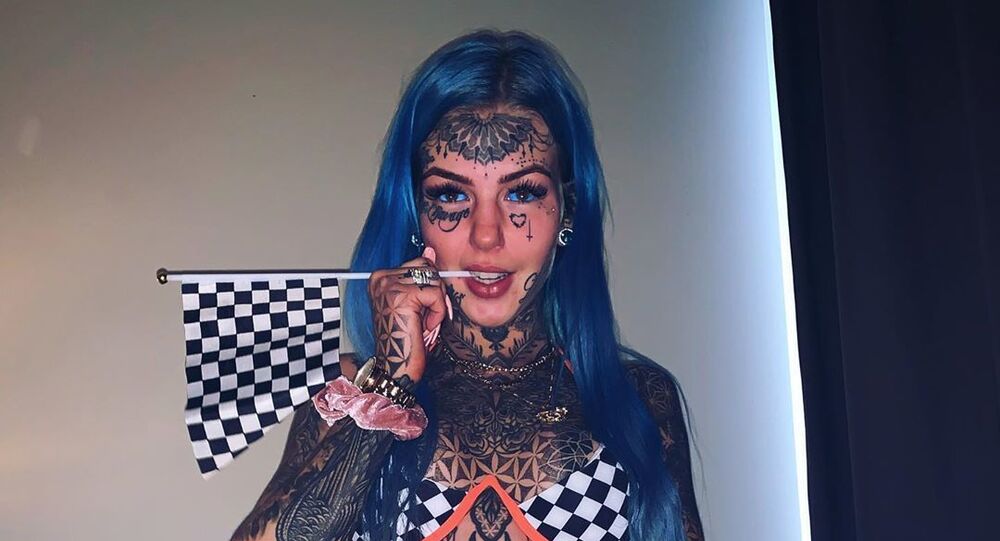 Bombshell Reveals She Spent $26,000 on Transformation From Sweetheart to Blue-Eyed Dragon

The 24-year-old developed her taste for inking when she was a teen struggling with depression. So far, she has artificial fangs, over 100 tattoos, eyeballs that have been inked blue – which caused her to lose her eyesight for some time – as well as has had her tongue cut in half and made her ears pointier. However, she’s not going to stop here.

Amber Luke from Australia, who calls herself “Blue Eyes White Dragon” and “Queen of the 666” on her Instagram account, has told the Daily Mail Australia that she wants to be “fully covered” with tattoos by the end of next March. According to the blue-haired piercer from New South Wales’ Central Coast, she has already spent $26,000 on body modifications, but is going to the US next month to become “fully covered” and get “silver grills on the shape of two fangs for my canine teeth”.

Amber shot to fame last year after several media outlets reported about her passion for bodily transformation: at the age of 24, she has more than 100 tattoos, including a mandala and the word “Savage” written on her cheek, along with piercings and even went blind for some time in order to have her eyeballs inked blue; she has also had her tongue split like a snake’s and been given “pointy” ears with silicone implants inserted into the tips. On top of this, the “dragon girl” has dyed her hair blue and purchased a set of acrylic fangs that are “sharp enough to pierce skin”, as she put it.

To celebrate 100K, here’s to those who tore me down in high school, those who bullied my mental health, those who doubt me and to those who are too close minded to get to know me - fuck ya. To the legends that supported me through the roughest days, the days I tried to end my life for good, the days where there was no light guiding me anymore - I love you all. Thank you for your love 🌹 #bluehair #fullbodytattoo #inkedgirls #tattooedgirls #grounded #girlswithtattoos #alternativegirl #ambsluke

“I decided years ago that I wanted vampire fangs. I knew I wanted them to be a part of my look. No downside whatsoever. They're easily removable and one day I'll be getting permanent ones”, she told the newspaper.

According to the woman, since her story was made public, she has been bombarded with photoshoot and business offers. Furthermore, her Instagram page, where she keeps her fans updated on her journey of transformation and shares saucy snaps that leave little to the imagination, now has more than 100K followers.

The transition into a “dragon girl” took Amber years and started when she was a fresh-faced teenager, some of her nostalgic posts suggest.

bit of a flashback ✨

The Daily Mail reported that she was diagnosed with clinical depression when she was 14 and developed her passion for inking after she turned 16, saying that she had then found “an outlet that released all my negative energy”.

“I didn't know who I was or what I wanted from life. I was catatonic and couldn't see what was best for me. I was naive. But I now have a backbone and I can stand up for what I believe in. I also have the confidence to look how ever I want too”, she told the outlet.