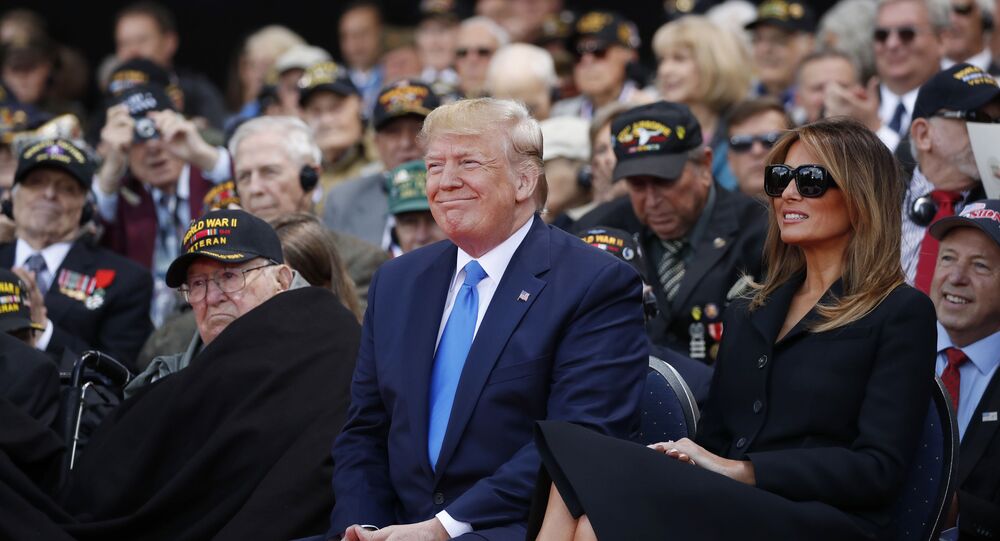 The stunning first lady of the United States has found herself at the epicentre of veterans’ attention while accompanying her husband, President Donald Trump, for D-Day commemorations in the United Kingdom and France.

Harold Terence, a 95-year-old US veteran, has made international headlines for scoring a high-five from Melania Trump after being awarded the French Legion of Honour medal from Emmanuel Macron in a ceremony near Omaha Beach in Normandy as part of the commemorations marking the 75th anniversary of the D-Day landings in France.

Even though the veteran is not a fan of President Donald Trump, he has revealed that he respects his office and was overwhelmingly excited when FLOTUS spotted his hand and gave the high-five, with the epic moment caught on camera.

It, however, appears that Terence had a completely different plan at first and even made a bet with a friend that he would hug the first lady on stage, but when it came to the action, he “froze” and decided to go with a handshake, which incidentally turned into the now-viral high-five.

“I met Melania this trip on the stage and I sort of messed up. I bet my friend a breakfast that I would get a hug from her. We shook hands and my daughter took a picture and I froze. I wanted to put my arms around her but I didn’t. I know she would have Ok’d it and I didn’t do it. We have the picture of just me and her holding hands and then getting a high five from her”, he said.

Terence is not the only veteran to have been impressed by Melania this week: 93-year-old Thomas Cuthbert made a somewhat flirty remark about FLOTUS to President Trump, playfully telling POTUS, “Oh, she is a nice lady, isn’t she? If it wasn’t for you and if I was 20 years younger…”

A 93-year-old D-Day veteran made a flirtatious remark when he met Donald and Melania Trump in southern England.

"If only I was 20 years younger," lamented Thomas Cuthbert as he appeared to gesture towards the First Lady. pic.twitter.com/2VkmPh5sdS

Trump was quick to come up with a witty response, replying to the veteran, “You could handle it, no question”.

READ MORE: Melania Saves the Day as Trump Reportedly Forgets About Own Gift to Queen

Cuthbert then was cited by the Essex Live as saying that President Trump “surprised” him and “came across very well”, while “his wife was very pleasant” as well.

© AP Photo / Thibault Camus
Melania’s Body Double Posed as FLOTUS by Trump's Side Over D-Day Celebration, Fans Claim
As part of their European tour, the US first couple joined Queen Elizabeth II in Portsmouth along with over a dozen heads of state to commemorate D-Day and honour the Allied soldiers who helped liberate Europe from the Nazis 75 years ago.

Melania and Donald Trump then left for France, where they paid tributes at the Normandy American Cemetery. The graveyard is where 9,388 US soldiers, who lost their lives during the Second World War, are buried.

On 6 June 1944, the Allied forces landed in Normandy to begin Operation Overlord, the largest amphibious invasion in history, which led to the establishment of the Western front to liberate Nazi-occupied Western Europe.