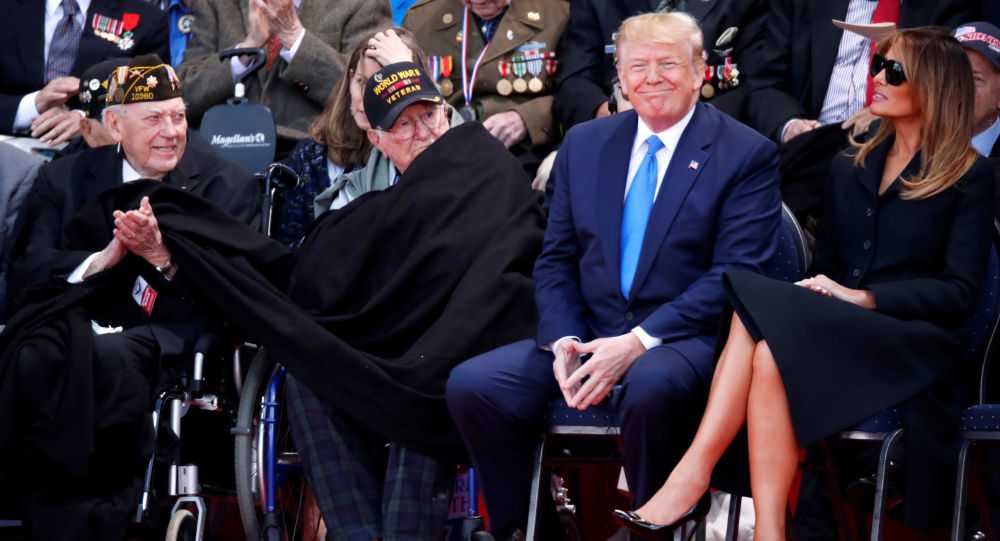 As FLOTUS appeared in public by her better half’s side at the D-Day ceremony in Normandy on Thursday, the internet couldn’t help but notice that she didn’t remove her pair of solid black shades even during the event.

Fans have lashed out at Melania Trump after she joined the 75th D-Day anniversary celebrations alongside her husband, wearing a pair of sunglasses that appeared to match her bespoke mid-length black coat and corresponding black heels.

Having seen FLOTUS’ smart black-framed shades, which were perhaps specially chosen for the sombre but solemn occasion, Twitterians rushed to drop critical remarks, with many viewing the accessory as “disrespectful”.

Why did Melania Trump not remove her sunglasses at this most solemn D day ceremony? How disrespectful! Mrs Macron wasn't wearing sunglasses. I guess she is uncomfortable making eye contact. She thinks she is sitting on the French Riviera sipping champagne!!

What is it with Melania & the sunglasses all the time?

Am I the only one thinking it is rude of Melania to always wear sunglasses?

And while were on the subject, can I just get this off my chest right here - Melania needs to take the dang sunglasses off. It's rude! Yes, I'm a little old fashioned.

One even invented a hashtag to generalise the US first couple’s approach: #MobsterWhiteHouse, with another echoing the stance:

“It's always about her looks. How disrespectful. The woman just has no class”, the Internet user noted.

However, many struck back in response to the derogatory comments, arguing that there could be real physiological reasons for Melania not to remove the accessory:

To all the folks complaining about the First Lady’s sunglasses, if you have even a shred of intelligence you must realize that the only disrespectful thing happening was the shenanigans in DC (btw it is not Trump and melania, It is the President and the First Lady) #basebitches

“What's wrong with Melania wearing sunglasses? Maybe the sun was in her eyes. What's wrong with you people”, one Twitterian wrote in indignation, while another referred to the criticism as “the stupidest thing I’ve ever seen”:

This is the stupidest thing I’ve ever Seen 😂😂.https://t.co/txALDryf0r

Maybe she was crying or has dry eye syndrom. Some people have to wear sunglasses when outside.

One similarly remarked that if there had been no sunglasses at all, haters would have found fault with something else, like excessive squinting, for instance:

My gosh... People must find something to complain about... If Melania had not been wearing her sunglasses she would have been accused of excessive squinting or perhaps even sleeping through the event.

Another user appears to have come up with a somewhat reconciliatory approach, bringing together the two opposing points of view:

The thing is, if Melania had a real public persona, this would never work. But she doesn’t. She rarely speaks publicly, rarely smiles when she’s with her husband, and is basically clothes and hair... and sometimes sunglasses.
I actually applaud her for finding a way to chill.

Separately, the longstanding conspiracy theory of a body double was also brought up in comments:

My theory is, whenever we see her in sunglasses it's not Melania.

That’s fake Melania, BTW. You can always tell by the sunglasses and wig combo (he hair is slightly diff than actual Melania), but she’s a little shorter than Melania. https://t.co/mckhlR3pRD