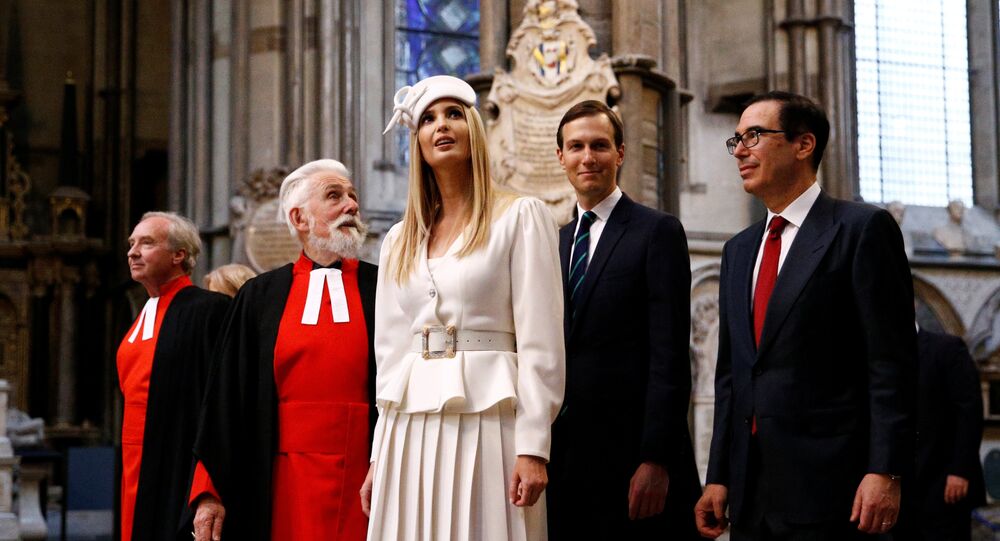 The apparent misstep took place when Ivanka Trump attended a state banquet at Buckingham Palace on Monday as a guest of Queen Elizabeth II, who hosted US President Donald Trump and members of his family and administration. The event was part of Trump’s three-day state visit to the UK, which wraps up today.

Social media users did not mince words while lambasting Ivanka Trump’s lapse on Monday, when she did not put her right hand over her heart while the US national anthem was played during an event at the UK’s Buckingham Palace.

While some accused her of “having no heart”, others insisted that Ivanka Trump desperately “needs civic classes”.

“The White Trump Family is nothing but an embarrassment to the world”, one netizen tweeted, echoed by another who claimed that “after all, it must be very difficult to locate a heart inside a trump body”.

You need to tell Ivanka it is disrespectful to not put her hand over her heart when the National Anthem is playing. One would have thought that seeing Trump put his hand over his heart would have given her a clue, but sadly she chose not to do the right thing. Why was she there?

So, during the playing of our National Anthem at the State Dinner in the UK, why didn't Ivanka have her hand over her heart?
Melania, Trump, and Jared showed respect, but Ivanka just stood there like a lump on a log!

So, what's up with @IvankaTrump not putting her hand over her heart during the National Anthem??? I'm sure the world will implode like when President Obama forgot his flag pin, right? 🙄😪🇺🇸

And Ivanka didn't put her hand over her heart during the national anthem. Could it be she doesn't have one?

Deplorable…Ivanka needs civic classes. Guess Drumpf didn’t tell her to place her hand over her. heart when the National anthem is placed.@IvankaTrump

I noticed that @IvankaTrump failed to place her hand over her heart during the American National Anthem. She was also under dressed for such an occasion. I wish the White House held an etiquette class before allowing the US to be represented in such a manner.

Any particular reason that Ivanka doesn't have her hand over her heart for the National Anthem. Even her idiot of a husband does.

The first robot, I mean daughter, @IvankaTrump not placing her hand over her heart during the American National anthem is so not surprising #trump #QueenElizabeth

Ivanka — no hand over your heart during the national anthem at the State dinner.

How unAmerican! And you don’t know the words apparently…

We need to teach Ivanka to put her hand over her heart when the National Anthem is played. Guess she didn’t learn that in private school or at home.

Points to consider about @IvankaTrump:
1. She doesn’t recognize our National Anthem
2. She has no clue where her heart should be.

She doesn't have a heart nor does Donald as we have seen by their very actions.

I personally do not blame ivanka trump for not placing her hand over her heart when our National Anthem was played. After all, it must be very difficult to locate a heart inside a trump body.

Next time, #Ivanka, when your hosts play OUR American #NationalAnthem, could you please put your hand over the place where your heart is supposed to be? Even your Daddy and #Jared got this one right. pic.twitter.com/ICUpLUlAFI

The US Flag Code stipulates that when the national anthem is played, “all present except those in uniform should stand at attention facing the flag with the right hand over the heart”.

Notably, the Flag Code is not enforced, and there is no punishment for not adhering to it.

On Wednesday, Donald Trump is wrapping up his first-ever state visit to the UK, which has seen an array of awkward episodes involving the US president. He, in particular, reportedly didn’t recognise his gift to the Queen and patted Her Majesty on her shoulder when she stood up with a glass of wine to toast Trump.