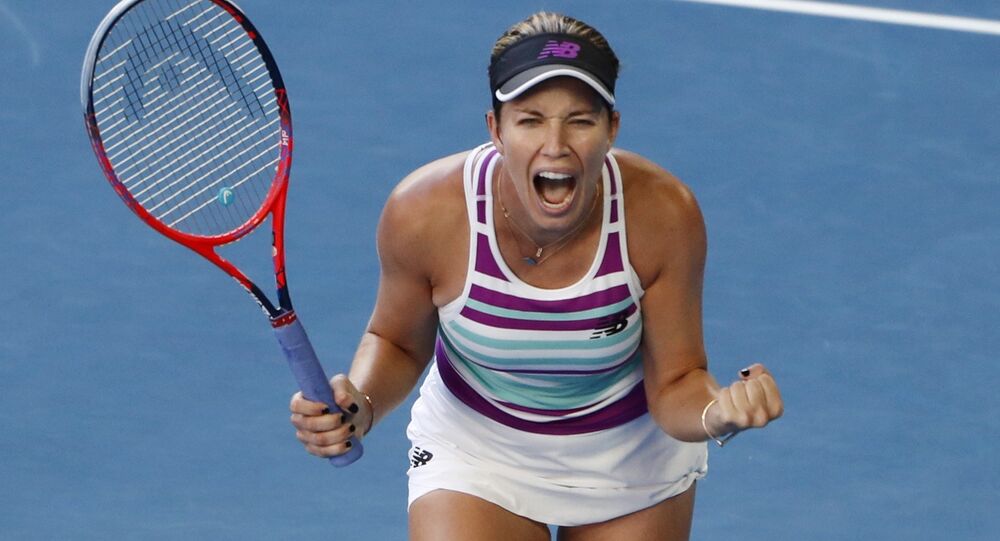 Given Collins' failure to grab a win during her so far five appearances at Grand Slams, the star’s unexpected results in Australia have indeed come as a surprise.

US tennis star Danielle Collins has surprised many with a run to the Australian Open quarters, after beating three seeded opponents including number two Angelique Kerber in Melbourne on Sunday.

Her 6-0 6-2 dominance against Germany’s Angelique Kerber was so impressive, that the fourth-round match lasted only 56 minutes with the triple Grand Slam champ left in awe by her opponent’s performance.

© REUTERS / Mario Anzuoni
'You're a Thief': Ariana Grande in Hot Water as Trio of Rappers Accuse Pop Star of Plagiarism

The 25-year-old Collins, who hasn’t notably grabbed a single win in her previous five Grand Slam tournaments, then squared off against Russia’s Anastasia Pavlyuchenkova on Tuesday. She eventually rallied from a one set deficit in this match to book her first spot in a Grand Slam semi-final.

The tennis star is well-known for her tremendous, 34,000-strong fan base on Instagram, with subscribers eagerly looking forward to her regular visual updates, be it holiday snaps or tournament mementos.

Most recently, around her birthday in December, she turned heads with a series of bikini snaps, several of them showing her in a pink two-piece enjoying a cruise on a yacht with a friend in Miami, Florida, to her fans’ cheers.

Below another snap, posted later in January, she wondered, tongue-in-cheek, if she is entitled to a “free swimsuit that every Instagram model posts in”, earning yet another storm of applause.

"No one more deserving!! Gorgeous," one fan wrote, with another one butting in:
"Incredible beauty."

Collins, who graduated from the University of Virginia in 2016 with honours as the highest-ranked college player in the US, first occupied the 167th spot in the world ratings before climbing to 36 last year. Her coach, Mat Cloer, shared with reporters after the match against Kerber that Collins feels most comfortable playing “offensive tennis”:

"Controlling the baseline, really stepping in, taking as much time as she can and she did a great job of that today. Her mentality, just her as a person, she's aggressive”.