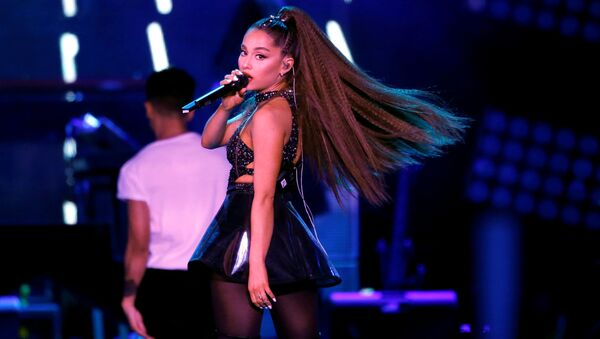 © REUTERS / Mario Anzuoni
Subscribe
Ariana Grande may have broken Spotify streaming records, with her “7 Rings” racking up nearly 15 million plays in 24 hours, but the pop star’s chart-smasher is seemingly bringing her a great deal of trouble.

Multiple artists have accused Ariana Grande of plagiarising their work as the singer broke the internet with “7 Rings”, the second official single off her fifth album,  “thank u, next”.

The song, Grande claims, was written after a lavish day out with friends in which she purchased each of her BFFs a ring at Tiffany’s, although a bunch of artists have their own version about the song’s origins.

Comedian Pete Davidson Bashes Ex Ariana Grande Over ‘Huge’ Penis Size Remarks
After New York City-based rapper Princess Nokia accused Grande of stealing her lyrics and flow from the song “Mine”, rap artists Soulja Boy and 2 Chainz joined the fray, calling out the singer for ripping off their style.

Soulja Boy went on a full-blown Twitter rampage, replying to Grande’s “thank you” thread and accusing her of being a “thief” for  using his 2010 hit “Pretty Boy Swag” for her latest track.

Give me my credit. Period https://t.co/Akhp2BXcuY

Princess Nokia specifically pointed to the part involving Grande rapping, “You like my hair?/Gee thanks, I just bought it” –  on “Mine”, the New York City-based rap artist repeated the line “It’s mine/I bought it”.

Nokia uploaded a now-deleted video of her listening to Grande’s single before playing “Mine”:

“Does that sound familiar to you? Cause that sounds really familiar to me. Ain’t that the lil song I made about brown women and their hair? Hmmm… sounds about white”, she mockingly said.

Guys…Princess Nokia I saying that Ariana possibly took a snippet of her song and used it for 7 rings… I can hear a similarity but idk pic.twitter.com/pRAsI0V4QC

While Nokia did not directly mention Grande, she is said to have liked a tweet by a fan who wrote that the pop star “literally steals flows, words, bars from Nokia”.

Ima big @princessnokia fan… AG’s new album literally plagiarizes flows, words, bars from Nokia… yo what a shame, millions of dollars and a TEAM of people to make and write your music…. yet they STILL STEAL https://t.co/7xa4zvk2ue

Ironically, “7 Rings” makes no secret about sampling the Sound of Music classic “My Favourite Things”, as well as The Notorious B.I.G.’s “Gimme The Loote” in the Bridge.

While Ariana has yet to respond to the allegations, Lashuan Ellis, who claims to have written the scandal-hit song for Grande, acknowledged that he had drawn inspiration from Soulja Boy:

I just wanna keep it real with y’all, I WROTE 7 RINGS by @ArianaGrande and YES I was inspired by @souljaboy ‘s pretty boy swag record, isn’t it obvious?? I was paying homage to the goat tho, wasn’t trying to steal anybody’s swag.

In addition to the plagiarism allegations, Grande landed in hot water on Twitter for what social media users described as appropriating black culture.

Grande shared an Instagram story that referred to a lyric frim “7 Rings”: “’You like my hair? Gee, thanks, just bought it’.  White women talking about their weaves is how we’re gonna solve racism”.

She’s been widely blasted for her use of African-American vernacular English (AAVE), as well as the excessive layers of fake tan:

alright…i. Love ariana grande with my whole soul…….but i know we’ve all known for a LONG time that she’s profiting off of appropriating black culture and she uses AAVE with more excess each song that comes out and….its just. time we start addressing this:/

I sometimes forget that @ArianaGrande is not black.
Not sure about her song writing skills but her spray tan shade has definitely gotten high. And with #7RingsMusicVideo she definitely went off. The first picture is from 2009 so, #10yearchallenge? pic.twitter.com/dQwzHr5223

Friendly reminder that you're white, since you seem to have forgotten underneath all that fake tan and AAVE.
You may have one less problem, but your brown face and blatant appropriation are still one of them.

After facing a great deal of backlash on social media, the former Nickelodeon starlet apologised for the remark:

“Hi hi… I think her intention was to be like… yay a white person disassociating the negative [stereotype] that is [paired] with the word ‘weave’… however I’m so sorry if my response was out of pocket or if it came across the wrong way. Thanks for opening the conversation and like… to everyone for talking to me about it. It’s never my intention to offend anybody”, she wrote.

Grande’s trap-pop single became a smashing success on Spotify, having broken the record for the most streams in a day: “7 Rings” reached 14,966,544 plays within 24 hours of its debut, the pop star’s manager tweeted.

Official numbers are now in- @ArianaGrande's #7Rings now has the Spotify all time record for most streamed song within its first 24 hours with 14,966,544 streams!! 4 million more than the former record holder! History is being made! Congrats to the team & @ArianaGrande bravo!

000000
Popular comments
I reversed modern terminology back to the retro era of the 90's and it goes a little somethink like this - Barr barr black sheep have you any wool, yes sir, yes sir 3 bags full.