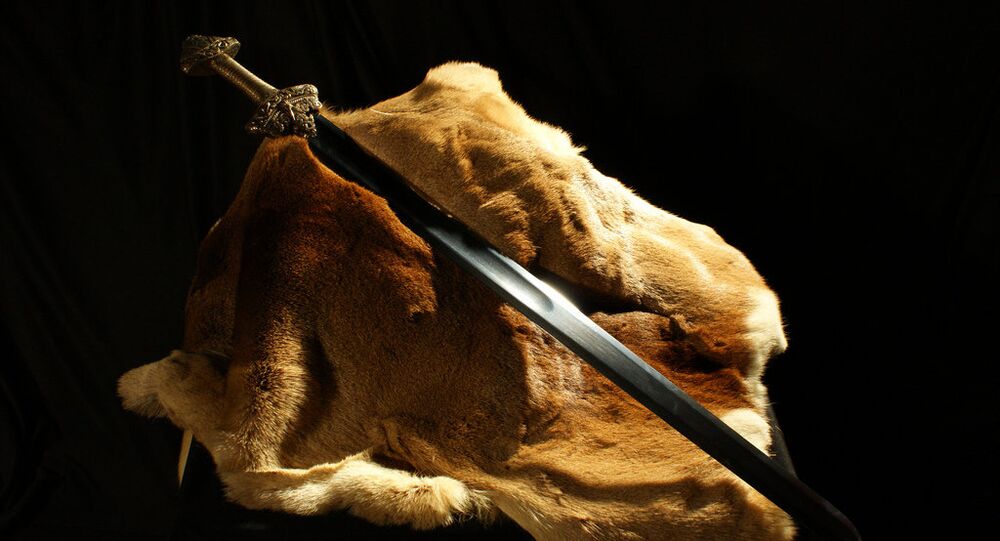 The girl, serendipitously named Saga, produced an archaeological sensation when she came across a pre-Viking era artifact during a family vacation. The story, which resembles the iconic King Author plot, has sent the social media into meltdown, with loyal netizens rushing to pledge fealty to their new queen.

Swedish-American girl Saga Vanecek has made headlines in Sweden and abroad after she pulled a 1,500-year-old sword from the waters of Vidöstern Lake during a summer vacation, which her family spent at their summer home there.

Due to a drought, the water level of the lake was unusually low. The Vaneceks placed a buoy in the waters near their house to warn boats about a concrete slab under the water, and eventually asked Saga to retrieve it, which took her longer time than they expected. However, the father didn’t suspect at first what kept her in the water.

8 year old girl fittingly named Saga finds a sword that is at least 1000 years old in a lake. The lake may have been a place of sacrifice as even older artifacts have now been found there. Here she and a local archaeologist show a picture of the sword. A memory for life, no doubt pic.twitter.com/3jua8AoSFI

​"I was outside in the water, throwing sticks and stones and stuff to see how far they skip, and then I found some kind of stick. I picked it up and was going to drop it back in the water, but it had a handle, and I saw that it was a little bit pointy at the end and all rusty. I held it up in the air and I said 'Daddy, I found a sword!' When he saw that it was bent and was rusty, he came running up and took it," she told the web-based media outlet The Local.

The family at first thought the finding was just a simple stick, then suspected a toy sword, but eventually decided to ask neighbors and Vanecek's colleague, a history buff, who advised the family to inform the authorities about the piece of armor, which seemed authentic.

According to the museum which examined the sword, it was created in the 5th or 6th century, even before the Viking era began. A brooch, dating back to the same time, was later discovered around the same place. In order to prevent the inadvertent destruction of any additional relics the lake may conceal, the museum asked Saga and her family to keep it a secret.

But as soon as the story was out, it made a big splash in the news and on social media, which buzzed about the numerous delightful coincidences in Saga’s story, while users pledged allegiance to their new-found Queen.

I hereby pledge my allegiance to Queen Saga https://t.co/rGePShZLDd

​Some praised her as a new super-hero, destined, no less, to save the world.

Imagine if Saga Vanecek who pulled the pre-Viking sword from the lake in Sweden teamed up with Owl Girl. Women would never again have to fear for the state of the world ⚔️🦉💪 pic.twitter.com/PO4V2AA5gf

Young girl, literally named "Saga," accidentally discovers an ancient sword, long hidden beneath the waters of a lake. I'd like to thank her in advance for saving us from whatever unspeakable horror is about to arise. https://t.co/ZjlOpcbcI3

Some just couldn’t avoid making the comparison to another pulling-the-sword-out-of-a–lake story, about King Arthur. A few immediately pronounced her Queen of the World.

An 8-y-o Swedish girl, delightfully named SAGA Vanecek, has pulled an ancient sword up from the bottom of a lake. Doesn't this mean she should succeed to the Throne of the World or at least of Camelot immediately? https://t.co/mfjwuroE2z pic.twitter.com/NZtCQa0PzW

Queen Saga and her sword pic.twitter.com/aDhMtRMLsG

Her symbolic name got particular buzz.

Her name is Saga and she claimed an ancient sword from a lake… 😳 pic.twitter.com/dO0hzKO52c

The Vikings, an American football team from Minnesota, where Saga’s family used to live, couldn’t help but joining in the hype.